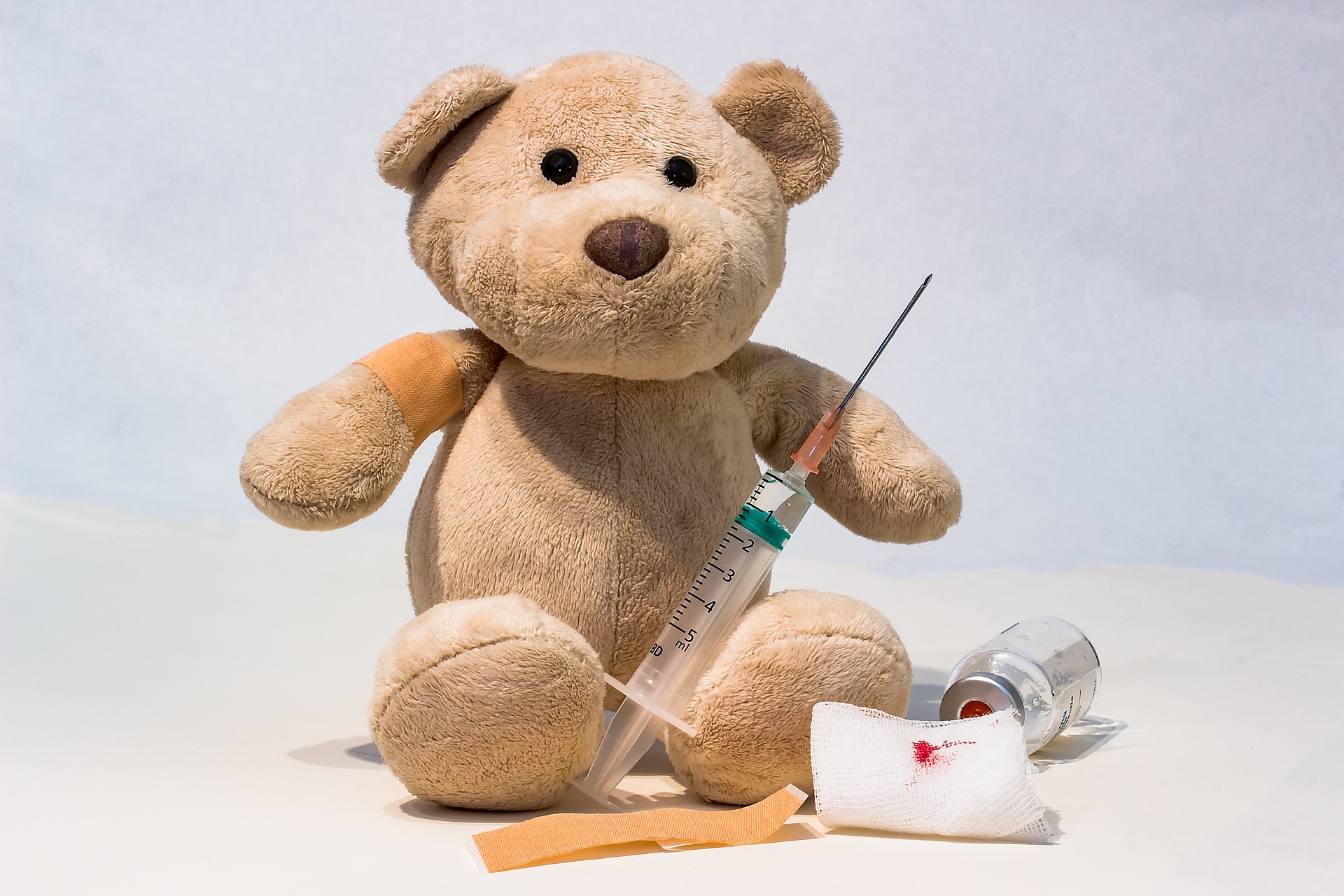 Well, I am currently in Facebook Jail, so I have a bit of free time on my hands.  I have become one of those people who ONLY stalk the pages and posts of their friends, but never comment...Because...facebook jail prohibits me from communicating with other users, evidently I am dangerous.  So today, while lurking around, one of my friends posted this MEME: 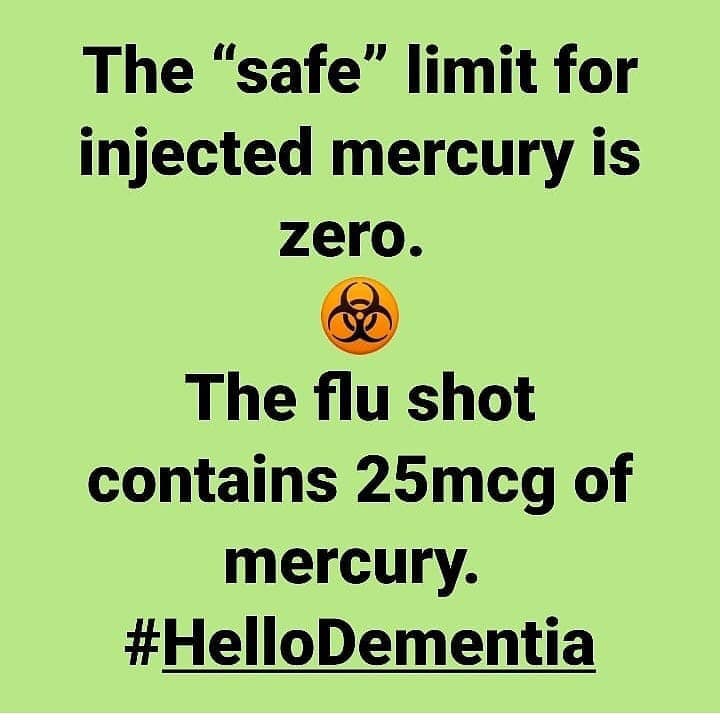 I decided that I needed to check those facts, I mean not everything you read on Facebook is true.  Ironically, the very first thing that came up was a link to a CDC fact sheet. Here is the link, https://www.cdc.gov/vaccines/hcp/patient-ed/conversations/downloads/vacsafe-thimerosal-color-office.pdf  but I really want to break this down, unpack it so to speak.  So let's do it, shall we.

The header reads, "Understanding Thimerosal, Mercury, and Vaccine Safety"  and directly under that there is a nifty definition and explanation of these things. To the right is a little Q & A to help the reader understand all of these BIG words better.  You can go to the link above and read those for yourself.  I am, however, going to point out one part of that Q & A that immediately caught my attention: 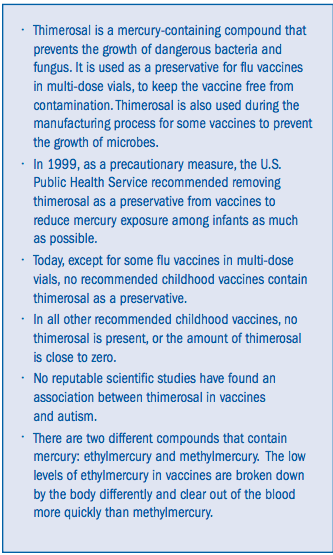 Why was thimerosal removed from vaccines given to children?

"In 1999, the Food and Drug Administration (FDA) was required by law to assess the amount of mercury in all the products the agency oversees, not just vaccines. The U.S. Public Health Service decided that as much mercury as possible should be removed from vaccines,and thimerosal was the only source of mercury in vaccines. Even though there was no evidence that thimerosal in vaccines was dangerous, the decision to remove it was a made as a precautionary measure to decrease overall exposure to mercury among young infants.This decision was possible because childhood vaccines could be reformulated to leave out thimerosal without threatening their safety,effectiveness, and purity. Today, no childhood vaccine used in the U.S.—except some formulations of flu vaccine in multi-dose vials—use thimerosal as a preservative."

So, this really stopped me in my tracks!  Thimerosal was "removed" from ALL childhood vaccines, but not really.  But on the left column of the page, it claims that "in all other recommended childhood vaccines, no thimerosal is present or the amount is close to zero."  So what number is "close to zero"?  The FDA.gov stated this: "A vaccine containing 0.01% thimerosal as a preservative contains 50 micrograms of thimerosal per 0.5 mL dose or approximately 25 micrograms of mercury per 0.5 mL dose. For comparison, this is roughly the same amount of elemental mercury contained in a 3 ounce can of tuna fish."   Well, geeze, now I need to know about the mercury in a can of tuna if that is what the Government is using as an placating analogy to the safety of mercury we can put in our body...everyone eats tuna fish.  Oh, but wait, right here on the CDC page I get a little lesson on the different types of Mercury!  AWESOMENESS! 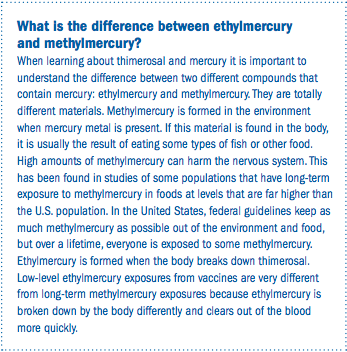 Are you following me here?  The CDC is explaining to us that the type of mercury found in, um, let's say a can of tuna, is extremely harmful to a body if enough cans of tuna are consumed: "High amounts of methylmercury can harm the nervous system." Evidently, Thimerosal contains ethylmercury.  Now perhaps I am simply not that smart as I try to understand what the paragraph to the left is saying.  So, if Thimerosal contains ethylmercury, how is it formed in the body as it breaks down the Thimerosal?  I went to a smart page and found this: "Ethylmercury (etHg) is derived from the metabolism of thimerosal (o-carboxyphenyl-thio-ethyl-sodium salt), which is the most widely used form of organic mercury. Because of its application as a vaccine preservative, almost every human and animal (domestic and farmed) that has been immunized with thimerosal-containing vaccines has been exposed to etHg."

But then, there is this, from, https://www.ncbi.nlm.nih.gov/pmc/articles/PMC1280369/ --> "Since the 1930s, vaccines have contained thimerosal, a mercury-based preservative that breaks down to ethylmercury and thiosalicylate in the body. By some calculations, children given the usual schedule of vaccines containing thimerosal receive ethylmercury in doses exceeding the U.S. Environmental Protection Agency’s guidelines for methylmercury, a known neurotoxicant. Because of the lack of pharmacokinetic and toxicity data for ethylmercury, methylmercury has been used as a reference for ethylmercury toxicity based on the assumption that the two compounds share similar toxicokinetic profiles. However, a new animal study shows that methylmercury is an inadequate reference for ethylmercury due to significant differences in tissue distribution, clearance rates, and ratios of organic to inorganic mercury in the brain [EHP 113:1015–1021].

During their first two years, children in the United States may receive more than 20 routine vaccinations. The rise in childhood autism has sparked concerns that thimerosal-derived ethylmercury may be at least partly to blame for some of these cases—concerns that are largely driven by awareness of methylmercury’s neurotoxicity. Beginning in 1999 thimerosal-free versions of routine vaccines for children under age 6 started becoming available. However, as of winter 2005, the flu vaccine still contained thimerosal, and the preservative continues to be used in vaccines in other countries.  In the current study, researchers assigned 41 newborn monkeys to one of three exposure groups. Seventeen of the monkeys were injected with vaccines spiked with thimerosal for a total mercury dose of 20 micrograms per kilogram (μg/kg) at ages 0, 7, 14, and 21 days, mimicking the typical schedule of vaccines for human infants. At the same ages, another 17 monkeys received 20 μg/kg methylmercury by stomach tube to mimic typical methylmercury exposure. A third group of 7 monkeys served as unexposed controls...Brain concentrations of total mercury were approximately 3–4 times lower in the thimerosal group than in the methylmercury group, and total mercury cleared more rapidly in the thimerosal group (with a half-life of 24.2 days versus 59.5 days). However, the proportion of inorganic mercury in the brain was much higher in the thimerosal group (21–86% of total mercury) compared to the methylmercury group (6–10%). Brain concentrations of inorganic mercury were approximately twice as high in the thimerosal group compared to the methylmercury group. Inorganic mercury remains in the brain much longer than organic mercury, with an estimated half-life of more than a year. It’s not currently known whether inorganic mercury presents any risk to the developing brain."  IT'S NOT CURRENTLY KNOWN WHETHER INORGANIC MERCURY PRESENTS ANY RISK TO THE DEVELOPING BRAIN!  It's not known or it's not being talked about?

"Reputable scientific studies have shown that mercury in vaccines given to young children is not a cause of autism.The studies used different methods. Some examined rates of autism in a state or a country, comparing autism rates before and after thimerosal was removed as a preservative from vaccines. In the United States and other countries, the number of children diagnosed with autism has not gone down since thimerosal was removed from vaccines."

Was thimerosal in vaccines a cause of autism?

I am NOT a Rhodes Scholar, but, considering this information from the CDC:  "Among children 6 months through 17 years, coverage with one or more doses of flu vaccine was 59.3%, unchanged from the 2014–15 season (59.3%)" And knowing that the Flu vaccine DOES INDEED contain Thimerosal and always has, why would any logical person not take that into consideration when making this statement, "the number of children diagnosed with autism has not gone down since thimerosal was removed from vaccines."  It was removed in 2001!  As I recall, the flu shot was not being pushed on the general public until about that time...ironic?   I also figured that since the CDC was making such claims to, well, I won't say, COVER UP...anything, I thought this might be of interest, since we are talking about facts and such; "In 2004, for example, vaccine production fell behind, causing a 40 percent drop in immunization rates. Yet mortality did not rise. In addition, vaccine 'mismatches' occurred in 1968 and 1997: in both years, the vaccine that had been produced in the summer protected against one set of viruses, but come winter, a different set was circulating. In effect, nobody was vaccinated. Yet death rates from all causes, including flu and the various illnesses it can exacerbate, did not budge. Sumit Majumdar, a physician and researcher at the University of Alberta, in Canada, offers another historical observation: rising rates of vaccination of the elderly over the past two decades have not coincided with a lower overall mortality rate. In 1989, only 15 percent of people over age 65 in the U.S. and Canada were vaccinated against flu. Today, more than 65 percent are immunized. Yet death rates among the elderly during flu season have increased rather than decreased."

Really, that is what I was researching when, well, THIS happened.  So, the CDC claims that there are NO vaccines that contain mercury...well, a couple of vaccines but really not that much mercury at all...kinda like eating a can of poison tuna fish!  We are told that only 2 vaccines that contain mercury are the Dtap and the combined Dtap Hib and here are the listed ingredients for the Dtap vaccine:

I just wanted to know about the amount of Mercury in vaccines!

If you read this thoroughly and perhaps even, slowly, it is quite clear that Doublespeak abounds.  I would even venture to say that there are LIES being told and these lies are so brash that they are written in plain sight!  And then we have the Vaccine Injury Compensation Program which has paid out more than $4.1 Billion dollars to people injured or killed by vaccines.  This began in 1986 with the advent of the National Childhood Vaccine Injury Act of 1986 (also known as the Vaccine Act), indemnifying drug companies from further lawsuits. So basically, the drug companies don't get sued and the Government simply pays out to those individuals who have suffered injury or death...if all of these went to court instead of a settlement, then a LOT might be exposed.

I hope you got the point of all of this!

moral of the story?  a simple meme might make you think...