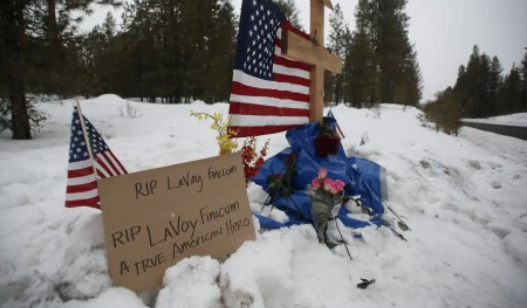 I just read an excerpt from Governor Jay Inslee regarding the well armed ANTIFA group in Seattle that is holding approx. 8 city blocks hostage.  "This is a challenging time. Many in our state are expressing heartfelt outrage at the very real racial injustices in our society. We have work to do now and in the future to both advance equity and protect the gains we’ve made. I spoke with @MayorJenny and her team about the situation on Capitol Hill. Although unpermitted, and we should remember we are still in a pandemic, the area is largely peaceful. Peaceful protests are fundamentally American, and I am hopeful there will be a peaceful resolution.  What we will not allow are threats of military violence against Washingtonians coming from the White House. The U.S. military serves to protect Americans, not the fragility of an insecure president."  THIS INFURIATES ME!  I mean, like makes my BLOOD BOIL! 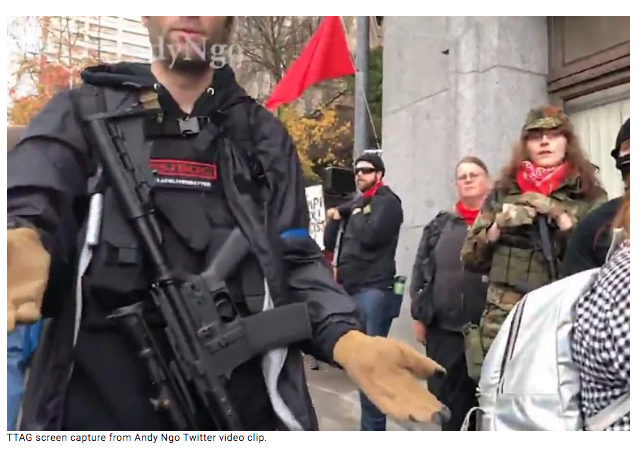 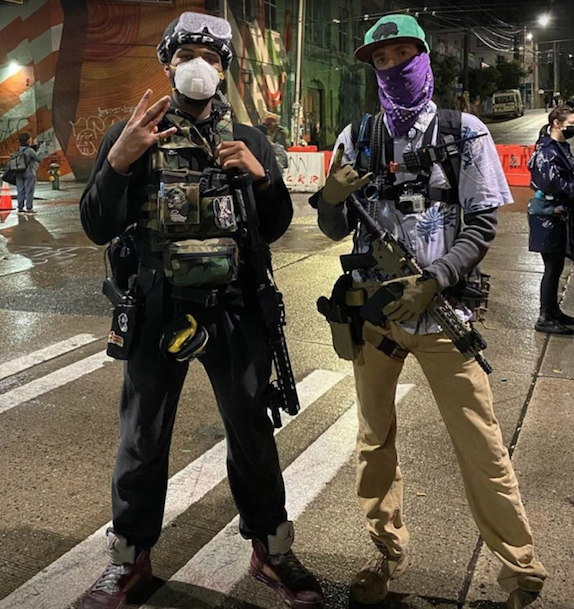 How is it that a bunch of Millennial, Thug wanna-be's, living off their TRUMP BUCKS, well that is if they ever had a real job to begin with and weren't living off their parents, how is it that they can do what they are doing?  And that IDIOT, Inslee and the twit of a Mayor think this is ok?  "Peaceful protests are fundamentally American" Inslee claims.   YOU CAN'T HEAR ME BUT I AM ACTUALLY SCREAMING IN MY MIND AS I WRITE THIS!  These people have taken hostage a part of seattle, where people live, have businesses used to be free to come and go...This is not a peaceful protest!  These people are not out in the wilderness or on their farms protecting their ranch land and cattle.  NO, the are in the middle of a city, intimidating anyone who does not believe in their FACIST, anti-government rhetoric.  You know what, I am sick and tired of hearing the term, "RIGHT WING EXTREMISTS" from pathetic, mewling, idle-headed Liberals!  Check your history folks...the real damage this country has sustained since its inception has been from the Liberal Left! And I am sick and tired of listening to their abhorrent lies!  I could honestly care less what happens to Seattle, but a big reality check is in order for Jay Inslee.

There was a man name Lavoy Finicum (2016 under the Obama administration) who was fed up with the Governments overreach in their owning of grazing land-- Bureau of Land Management (the REAL, BLM) and  Finicum claimed it was unconstitutional for the federal government to own these lands. In less than six months, Finicum accrued more than US$12,000 in fees and fines, which he refused to pay.  Now if you read this story on the majority of any internet search engines, like Google you will find words like, "Finicum served as a spokesman for the armed militants," & "heavily armed militia men."  The bottom line of this issue is that Finicum was cattle rancher, he and he wife were foster parents for the Catholic Charities Community Services in which he and his wife loved and cared for troubled boys and he was simply fed up with the Federal Government charging him ridiculous amounts of money to graze his cattle on PUBLIC LAND.  He became friend with the Bundy's who had also challenged the Federal Government...that is a horrific story you should research if you don't already know about it.  I am trying to make this short, but gosh, there is so much that needs to be said and the hypocrisy as to how a liberal is treated as opposed to a conservative when it comes to most things...peaceful protests included.

To make a point and a PEACEFUL protest, Lavoy and several other ranchers took over a bird refuge for their peaceful protest.  A place in the middle of NOWHERE, in the dead of winter, when it was closed to the public.  They didn't storm a building, or take 8 city blocks hostage, they simply holed themselves up in a vacant building.  The wanted the press and the media to notice them so that the Nation would know and understand the overreach the Federal Government was imposing on our nation's cattle ranchers...you know, the people that put that big, fat juicy steak on your table.  But the press and the Media Monsters spun this out of control. 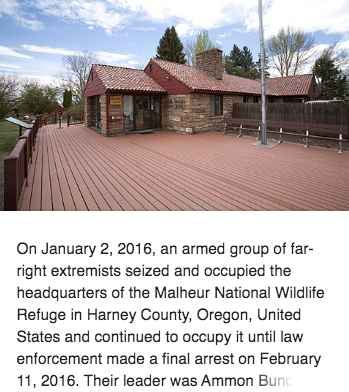 So now these very peaceful cattle ranchers, good ole boys with wives and children, are now, "FAR RIGHT EXTREMIST" who, "SEIZED" a vacant wildlife refuge.  They were constantly reported by the Media Monsters as Militants!  Not ranchers protesting the Federal Government infringing on their livelihood, but dangerous, extremist, right winged, domestic terrorists!   Seriously, my head is about to explode as I write this!  I follow every bit of this situation as I did with the Bundy's.  I am sure that those of you that read my articles also are familiar with both of these cases and that is why I am not going to go into much more detail, because if you follow me, you already know.  And the reason I am writing this is to prove out a point that ANTIFA, most likely backed by someone with a LOT of money, and we know who that is, has no other purpose than to disrupt our Constitution and our Republic.  And Governor Inslee has made it perfectly clear that he backs this ideology by his KID GLOVE treatment of ANTIFA, an actual terrorist group holding parts of Seattle hostage!  Ok, returning to the story...

Levoy and several others were on their way to a small Oregon town about 3 miles from the bird refuge to talk to the sheriff and speak at a public meeting.  Meanwhile the FBI and local police and set up a trap on the highway, a place they knew had no cell service and murdered Lavoy Finicum.  He was setup to be murdered by our very own government.  Cause of death was listed as three gunshot wounds of the back, abdomen and chest. All wounds were specified as gunshot entry from the back (posterior left shoulder, left upper back and right lower back.)  Shot 3 times in the back.  Where was the outrage?  Where were the protests, the riots for the life of this INNOCENT man, this peaceful protestor who was just trying to get into town to talk to the Sheriff was ambushed and murdered and the other 3 occupants in the vehicle, 2 women, one a teenage girl and a young man were terrorized.  But there was NO outrage by the media monsters, the Governor of Oregon didn't take a knee for the murder of this innocent man.  I AM OUTRAGED!

Inslee has some nerve to say, "What we will not allow are threats of military violence against Washingtonians coming from the White House. The U.S. military serves to protect Americans, not the fragility of an insecure president."  This ambush of peaceful protestors and subsequent cold-blooded murder of Lavoy Finicum came directly from the OBAMA Administration!  On  Jan 20th, Oregon's Governor, Kate Brown wrote of Obama's DOJ, Loretta Lynch saying: "I request on behalf of my fellow Oregonians that you instruct your agents to end the unlawful occupation of Malheur National Wildlife Refuge as safely and quickly as possible."   SIX days later Lavoy Finicum was dead!

How about this Governor Inslee,  we all know that you share the same ideologies as your Oregonian neighbor, Kate Brown, so why don't you want TRUMP'S DOJ to put an end to your Domestic terrorists that are NOT holed up in a remote bird sanctuary, but right in the middle of a city, the same way that Obama's DOJ put an end to the life of Lavoy Finicum and his peaceful protest?  I want to know the answer to this!

THE LEFT MOCKS DEATH OF A CA. DEPUTY D.A. KELLY ERNBY AS AN ANTI-VAXER, DID SHE REALLY DIE OF COVID?