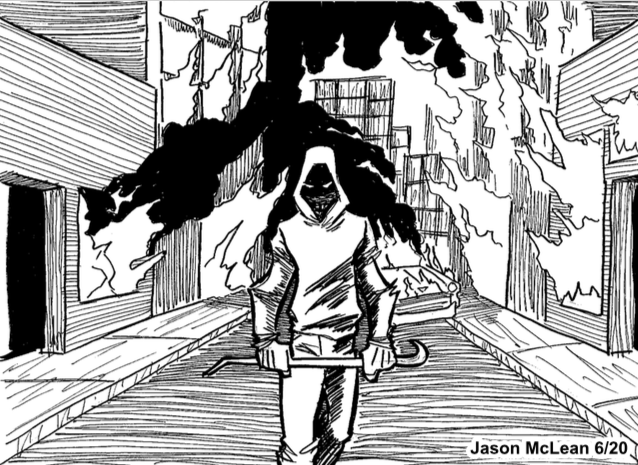 For those of us old enough and wise enough to understand the social meaning of William Golding's 1954 novel Lord of the Flies, we clearly see the situation and events that have unfolded in Seattle's Capitol Hill area as, Life imitating art. CHAZ (Capitol Hill Autonomous Zone now more appropriately re-monikered to CHOP (Capitol Hill Occupied Protest), because we all know that the hostile takeover of 6 city blocks in Seattle is an "occupied" and hostile, takeover and was never meant to be considered anything other than that.  And like The Lord of the Flies, the "children" without adult supervision, without any type civility, quickly turn into uncontrolled, undisciplined  savages.

The parallels are quite apparent...one was a result of a  plane crash and the other a train-wreck.  Yes what we are seeing in Seattle, is a TRAIN-WRECK!  A planned derailment  full of unhappy, delusional, Gen-Z’ers who were never spanked by their parents, always expected a trophy even if they didn't even show up and were constantly told that they deserved everything.  They are the complete fulfillment of the women's lib movement...babies raised by daycare workers, pushed through public school, most college educated in basket weaving, finding that all those student loans used to buy fun stuff must be paid back and damn it, life is just NOT fair!  These are the kids that have been raised in a PC world where personal responsibility does NOT exist and  they learned well from the ME generation that it is all about satisfying the beast inside and it really has nothing to do with personal rights, or community responsibility, or unity.  What we have been witnessing in Seattle was NOT spontaneous, this was planned, organized and funded.  These are not young people who have jobs, pay rent or have any civil responsibilities.  These are couch surfers, basement dwellers and kids simply looking for a thrill and we all know for a fact that this could NEVER be pulled off in the middle of winter!

After the Capitol Hill Police held up their hands and took a knee to these hoodlums, the plan took  fashion rather quickly, almost too quickly if you think about it.  "Mayor Jenny Durkan’s office wrote in a blog post, “Minor changes to the protest zone will implement safer and sturdier barriers to protect individuals in this area, allow traffic to move throughout the Capitol Hill neighborhood, ease access for residents of apartment building in the surrounding areas, and help local businesses manage deliveries and logistics. Additionally all plans have been crafted with the goal of allowing access for emergency personnel including fire trucks."  It almost sounds like Miss Jenny was in on this from the beginning with words like, "crafted." And she wants to "protect" criminals.  Do not fool yourselves, these people are criminals!  They have stolen from local citizens who pay property taxes, rent, utilities, etc!  Then we have city councilwoman Kshama Sawant  fully supporting this hostile takeover in Seattle.  Kshama, a transplant from India, is a member of the Socialist Alternative party and wrote a book called American Socialist. Now if you don't know what the Socialist Alternative party is all about, here is a glimpse: "Socialist Alternative is a Trotskyist political party in the United States." Deeper now; "Trotskyism is the theory of Marxism as advocated by the Russian revolutionary Leon Trotsky. Trotsky identified as an orthodox Marxist and Bolshevik–Leninist." Leninist?  "Marxism–Leninism is a political philosophy that seeks to establish a socialist state to develop further into socialism and eventually communism, a classless social system with common ownership of the means of production and with full social and economic equality of all members of society. Now  just swallow that red pill..."Trotskyists are critical of Stalinism as they oppose Joseph Stalin's theory of socialism in one country in favor of Trotsky's theory of permanent revolution."  I find it interesting that this "Socialist" (of the worst kind) councilwoman lives in some pretty nice digs for someone for the people, a confessed Socialist.  I'll let you investigate her on your own.

We are beginning to see who is controlling the kids.  "Our movement needs to urgently ensure East Precinct is not handed back to police, but is turned over permanently into community control,"  OUR MOVEMENT? Community control?  This is a direct quote from Councilwoman Sawant.  So nice to know that Seattle's elected officials are in on this...I am sure that those who had to evacuate their homes for fear of their lives as well as the business owners who can't operate in CHOPVILLE are real happy about the intentions of their city council!  Girmay Zahilay who is a King County Council-member, is warning people to remain focused on the issues.  ISSUES?  Like a bunch of spoiled rotten grown-up tweens demanding free college, free health care, defunding the police, funding community safety and NO-Prosecution for all protesters holding a part of the city hostage!  Give me a break!  Zahaily has the nerve to state: "If we’re benefiting from freedom purchased through the work of Black organizers, we all have to be advancing their demands."  What in the hell does that even mean? Who is "benefitting" anything from this chaos?  Ahh, yes, those who are pushing their Socialist agenda.

It has been NO secret that Governor Inslee is drunk on his dictator power, instilling fear and Covanoia into Washington State citizens.  And even though Chazville has been a glee and delight for the mainstream media monsters to incessantly repot on, the intoxicated Governor has no idea any of this property extortion is happening in the largest city in his state! When a reporter asked him on June 10th about this hostile takeover, Inslee replied, “That’s news to me, so I’ll have to reserve any comment about it.” He further remarked when told protesters were not allowing anyone to enter the area “I have not heard anything about that.”  Hasn't heard about it?  Hasn't been informed that a Wall was built (walls bad), armed guards are protecting Chazchopville from hostile intruders (walls and guards bad) and that 6 blocks of a city he is governing has been overrun by domestic terrorists, um I mean, "protestors."  Isn't this everything that those related to Auntie Fa despise?  Walls, armed guards to keep people from coming in?  Check points with guards? And Inslee had NO IDEA...Trump's wall  and armed guards to keep illegals out--BAD!  ChopChaztown's wall and guards armed with military type assault guns to keep American Citizens out--GOOD!

“Maybe," he said hesitantly, "maybe there is a beast."..."What I mean is, maybe it's only us.”
― William Golding, Lord of the Flies

COCA-COLA OUT OF PERFECT HARMONY! THEY WANT TO TEACH THE WORLD TO SING RACISM!