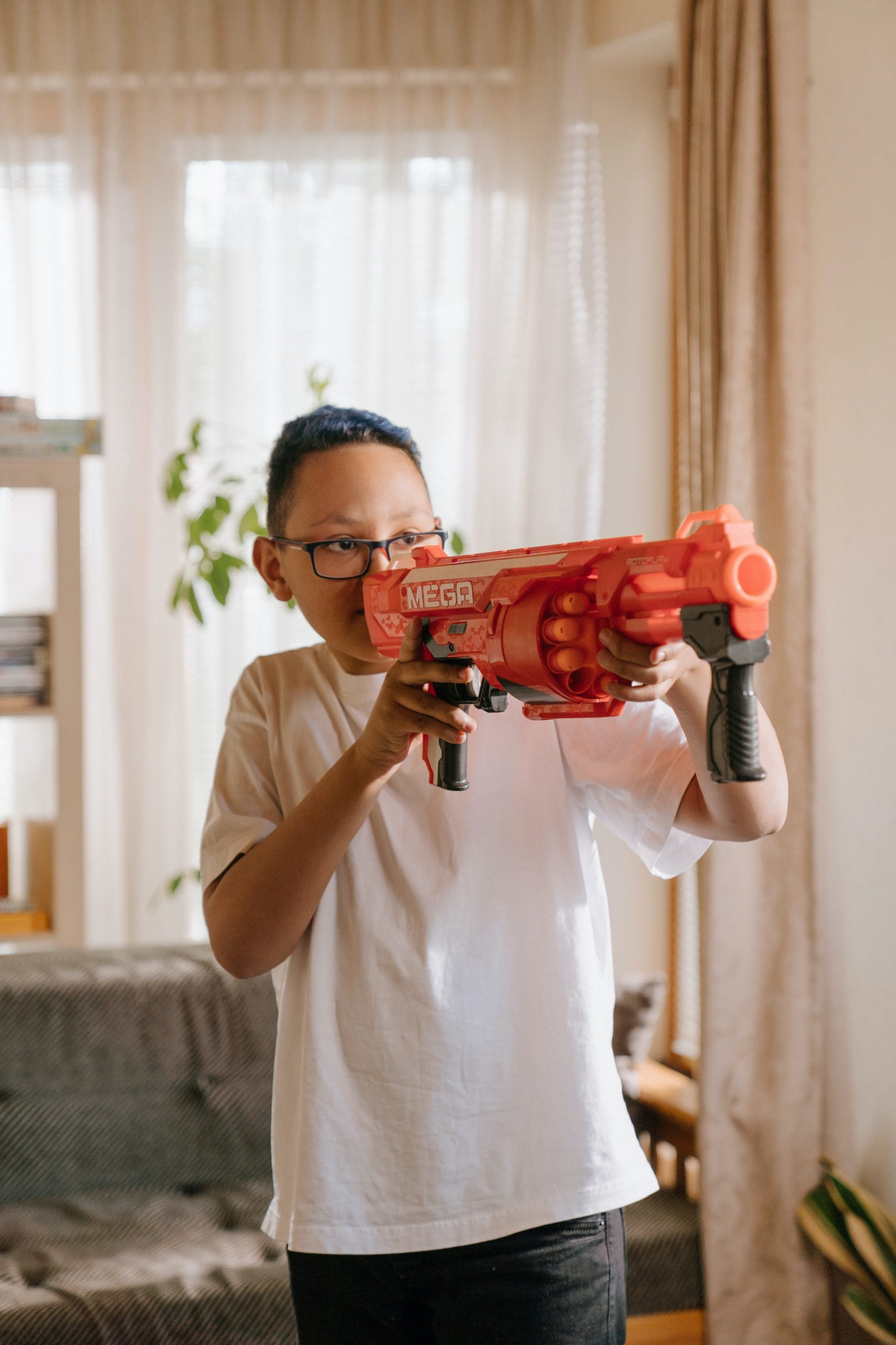 Photo by cottonbro from Pexels

It's a universal word, a collective understanding...THEY!  We all know who THEY are in any situation or circumstance.  "They are going to destroy us..."  "They are going to help us..."  Isn't it ironic that we all know them; who THEY are?  And right now, THEY are scheming, as usual to take your guns.  It generally kick starts with a school shooting or any mass shooting, but particularly a school shooting.  These tragic events, almost always carried out by a wacko Lefty who the Media Monsters desperately try to flip Red as they conjure up images of dead children covered in blood...oh the senseless killing.  It doesn't take long however to dig just a bit below the surface to see the true color of these psychopaths--code blue killers, but in the meantime, the media has already spun their narrative to portray these killers as Conservatives, Religious zealots, Republicans and people believe them.

Take the El Paso shooter for example, this wack job killed 23 people and injured 23 others in an El Paso, Walmart.  He was immediately portrayed as a White Supremacist, just as the psycho in New Zealand was labeled after shooting up 2 Muslim Mosques and killing 50 people.  The really interesting thing here is that both of these men posted their "manifestos" on a site called 8chan.  At first glance and just skimming the surface, the media would call out this site and its users as, "right-wing extremists."  But all you have to do is to actually READ THE WORDS!  "The site’s most infamous message board, known as “/pol/”, attracts far right groups, such as neo-Nazis and self-described fascists." "Neo-Nazis," "fascists,"  these are NOT terms that describe a right-wing ideology...no matter how hard the LEFT tries to spin it. Neo means NEW and the Nazi's were NOT right-wing!  They were fascists, determined to kill ANYONE who didn't think the way they did.  Just like the Liberal Democrats of the Civil war era and thereafter, Hitler wanted to keep a PURE, WHITE race.  THIS is a deep seated ideology of the Democrats and this is why we fought the Civil war!  How quickly history is being re-written and how so many are painfully IGNORANT of these facts!

Back to this, 8chan website where both of these mass shooters (and other mass shooters) frequented, posted to, and flat out told the world of their murderous intentions..."8chan “/leftypol/” forum attracts characters from the radical left, supporters of communism, Marxism, anarchism and the board’s moderator is known for Stalinist views." The Guardian.com posted this headline in 2019:

"8chan: the far-right website linked to the rise in hate crimes. Three attackers in six months allegedly posted their plans on the site in advance. Why is it allowed to operate openly?"

Website after website calls this site a "Right-wing Extremist" platform, twisting the truth by simply writing the words, "Right-Wing."  AND LIBERALS BELIEVE IT!  How intellectually lazy have people become?  It's just so easy to write words and make it so!  Why is it so hard to really look at the words?  No matter how anyone tries to spin it, the TRUTH exists and generally in plain sight.  The Guardian states, "But extremism has been central to 8chan identity since it was founded in 2013 by a computer programmer and self-proclaimed eugenicist Fredrick Brennan."  Here it is, in plain sight; EUGENICIST!  How completely stupid are people?  You know who else was a Eugenicist?  Darwin, Hitler, Margaret Sanger and all the Democrats of the Dixi South!  These ARE the White Supremacists! How in the world are normal Joe Liberals buying a FAKE narrative?  Is it because of public school indoctrination?  Can't be...I know some Libs well into their 50's that have bought into the Bullchit.  Do they simply want it to be so badly that they pretend to forget history?

It's really about telling a lie so often that even a reasonable intelligent person begins to believe it, because they WANT IT TO BE TRUE!  If the Democrats keep repeating a lie, that the "White Supremacists" are Conservative Republicans then they have ammunation to take our 2nd amendment rights away.  But, ahhh that pesky truth...it really can't be destroyed with the destruction of Confederate (DEMOCRAT) statues, and these utterly brainwashed Democrat Millennials don't even realize that they are desperately trying to expunge THEIR past, THEIR Hatred, THEIR historic racism!  And now, "abolish the Police!" This is their war cry and THIS is exactly what THEY want...you remember THEY, THEM...What are we seeing in the news?  Murders, everywhere, violent crime exploding, and who is to blame?  THE GUN!  Certainly NOT the people committing the crimes, but the GUNS.

Just look at the greasy SPILL of propaganda by the every honest and never Biased media monster, The Rolling Stone.  In 2019, they spewed their vomited spin on the Charlotteville incident, "Given the massive amount of national news attention being placed on the recent shootings, it’s terrifyingly easy to promote misinformation. In one particularly cynical instance of a content creator capitalizing on the discussion, Prager U, a far-right media outlet that was invited to President Trump’s recent White House media summit, released a video on Monday morning with the hashtag #TheCharlottesvilleLie, propagating the (verifiably untrue) conspiracy theory that Trump never uttered the words “there are fine people on both sides” when addressing the violence at the Unite the Right rally in 2017."  FACT CHECK:  Trump never denied saying there were "good people" on both sides!  What he DIDN'T say was the SOROS'S bought and paid for, thugs on both sides were "good" people! Don't for ONE MINUTE believe that Soros didn't pay for people to come out as "White Supremacists" to conflict with his paid for ANTIFA group.   And also, don't forget who the White Supremacists are---Democrat Dixi Southerners...same as they ever were!  And to claim, "Prager U, a far-right media outlet. " REALLY?  Because they hold to a different narrative, they are "far-right"?

Joe Biden outright said he was coming for our guns.  Give them an INCH and they will take a MILE!

Beto O'Rourke has absolutely NO idea what an Ar15 is!  His ignorantly passionate speech at the Democratic Presidential Nomination debates was crystal clear!  AR-15-style rifles are no more powerful than other hunting rifles of the same caliber and in most cases are chambered in calibers less powerful than common big-game hunting cartridges like the . 30-06 Springfield and . 300 Win. Mag. But listen to the mind numbing applause of the completely IGNORANT Leftist crowd!

So the plan...we are going to be seeing more and more mass murders like we saw over Fathers day weekend in Chicago.  We are now seeing NYC exploding in violent gun murders.  And even though this is all the evil deeds of Liberals, those who identify with the Democratic party,  the GUN is going to be the focus...the gun is always the focus for those who want to take away our 2nd amendment right to protect ourselves from these savages!  Biden claims that if he is elected President he will make Beto his gun control Czar; "You’re going to take care of the gun problem with me. You’re going to be the one who leads this effort. I’m counting on you. I’m counting on you. We need you badly, the state needs you, the country needs you. You’re the best.” Now how do you think the Democrats are going to control those, who adhere to their ideologies?  How do they propose stopping the Black on Black crime or the Left-Wing EXTREME shooters, ya know they ones who frequent the site that promotes Liberal Eugenics---8chan?  Is this going to go hand in hand with Bill Gates idea of reducing the population with vaccines?  "First, we've got population. The world today has 6.8 billion people. That's headed up to about nine billion. Now, if we do a really great job on new vaccines, health care, reproductive health services, we could lower that by, perhaps, 10 or 15 percent."  Bill Gates~Ted Talk

Don't be deceived people, THEY are wanting to take your guns...we need to start counter THEIR lies and put Truth back into fashion.  SPEAK THE TRUTH!  FOIL THEIR PLAN!  Really, there are MORE of us than THEM!  WWG1WGA!

Pulpit Freedom Sunday-501 c3 and the real reason there’s no politics at the pulpit!