I don't even live in Seattle but it infuriates me that Mayor Durkan had no issues at all allowing a bunch of Marxist, Socialists take hostage 6 city blocks in Seattle!  She actually encouraged this illegal takeover calling it a "summer of love."  Mayor Durkan defended these domestic terrorists by stating that CHAZville is "...a festival-like atmosphere...Seattle is fine and that the occupiers of the six city block area are just 'patriots wanting a better world?'” She had no respect or regard for the over 500 residents who legally lived in CHAZville. Many of these residents who pay high rents for their apartments had to find other places to live as they feared for their lives and the lives of THEIR FAMILIES! One resident who didn't want to be named stated, "...I am nervous to speak out. I want the roadblocks taken down. I want the streets to be open to people of all varieties of ethnicity, thought, and persuasion. I don't want armed patrols of unaccountable protestors roaming the streets on which I reside."  Business that were already in financial distress due to the draconian measures from Governor Inslee's COVID reaction, will soon be in ruin.  And what did the Media Monsters tell us?  They call these thugs, "heroes" and "Patriots."  They say NOTHING about the innocent people that live and work in that "zone" and how this has affect them.

Here is a video you won't see reported on the Mainstream media:

Ahhh, but, what just happened?  Sunday, Funday at the Mayor's house as these summer loving, festival making, peaceful protestors converge on HER HOUSE!  As one Chazite states, "We came down to Jenny Durkan's mansion to bring the demands of the movement and of the families who have been impacted by police violence to her doorstep as she seems to not be able to hear our demands any other way."  A spokesperson for the Mayor stated: "Mayor Durkan and her family are in the state program to keep their address confidential because of the death threats mostly related to her work as Seattle's U.S. Attorney under President Obama.  Instead of working to make true change, Councilmember Sawant continues to choose political stunts.  Tonight she did so without regard for the safety of the Mayor and her family. The Mayor was not even home - she was working at City Hall.  Seattle can and should peacefully demonstrate but should not put families and children at risk."   Geeze Mayor Durkan, what I think you meant to say is, "you should NOT PUT MY FAMILY at risk!"  Do you not think that there were families, including children living in the CHAZville hostage zone?  But, ONLY THE LIVES OF YOUR FAMILY MATTERS?  So this is what it took to disband these violent criminal, Socialist misfits?  A protest at YOUR HOME!  And you have the nerve to point you finger at your city council member, Kshama Sawant.  YOU CREATED HER!

So if the blame is to be put squarely on the shoulders of Sawant perhaps we should look a little deeper into this person.  First, she has been on the Seattle City Council since 2014. Six years, that's a long time.  Here is her official government bio if you want to take a look but here are the highlights:

And not in that bio:

Taken directly off the Seattle.gov site: 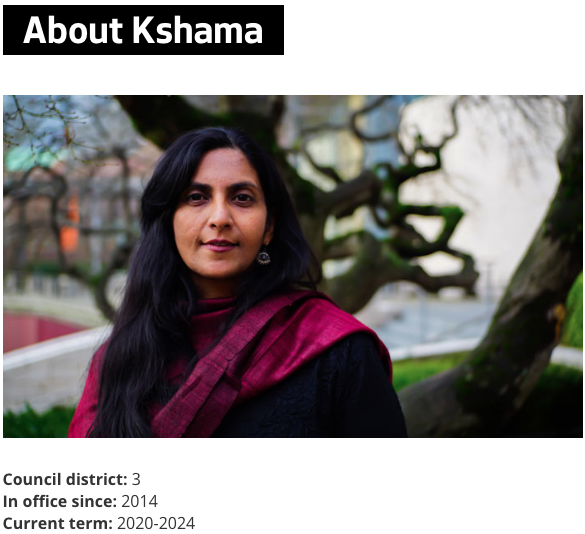 Alright, so here we have the Mayor of Seattle not only allowing CHAZINITES to illegally set up camp, terrorize citizens who live and work in those 6 blocks, but she encouraged it.  THEN, we have Kshama Sawant who literally LIVES for this type of chaos also encouraging CHOPVILLAINS to "protest" by taking over a part of a bustling city.  She is, after all a Socialist Alternative organizer.  But what exactly is a Socialist Alternative?    What is it an Alternative to?  Socialism?  And why did the Mayor get so pissed off at Sawant for bringing these spoiled brats to HER HOUSE?  I would guess that the good mayor knows exactly how dangerous Sawant and her band of violent gypsies really are!  And when it actually affects HER and HER family, well, that's the end of the occupied territory...just like that; BAM, DON'T BITE THE HAND THAT FEEDS YOU!

"Trotskyist political party in the United States. It describes itself as a Marxist organization, a national organization fighting in our workplaces, communities, and campuses against the exploitation and injustices people face every day."

I don't think you all need much more information to see the BIG picture here!  The Mayor of Seattle was obviously trying to placate the spoiled children that took over a part of Seattle...young people mind you that want Free Health Care, FREE Collage, Free everything and are being led by a woman, Sawant whose political party believes that the "working class" should be co-owners with those who built those companies.  Sawant is babysitting a bunch of misfit children who, obvious have no jobs, no mortgage or rent to pay and can camp out for weeks begging those on the outside of their "utopia" for food, and the supplies they need!  The moment she overstepped her bounds with the Mayor and brought her filthy little rebels to the steps of Jenny Durkan's home, all bets were off!  "Have your little revolution over there! But come to MY HOUSE...you're done!"  Sorry, Kshama Sawant , your little experiment failed!  And to you, Mayor Durkan, enjoy your ignorant and arrogant power while you still have it.  I have a feeling that you won't be on your throne for much longer.

THE LEFT MOCKS DEATH OF A CA. DEPUTY D.A. KELLY ERNBY AS AN ANTI-VAXER, DID SHE REALLY DIE OF COVID?

LIARS LIARS-COVID LIARS! BIG PHARMA–VACCINES AND OH SO MUCH MONEY TO BE MADE!