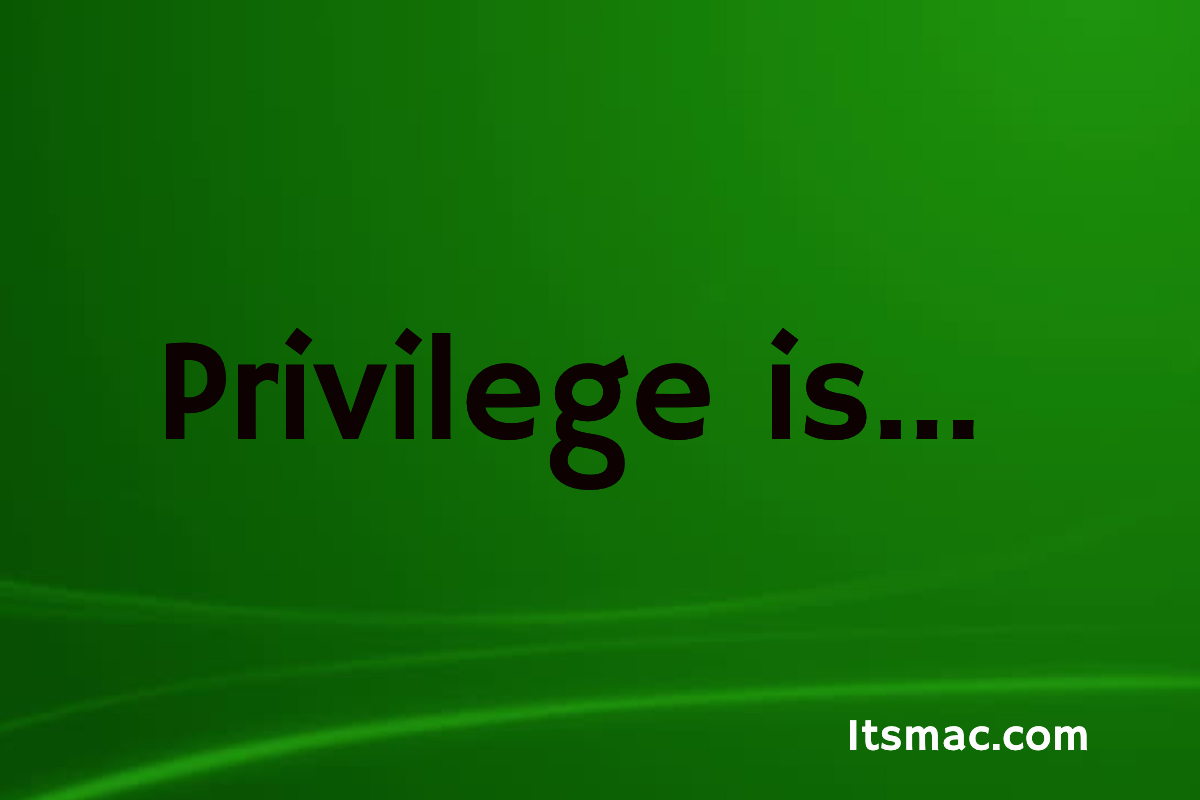 This may be relatively old news as far as news goes,I mean heck, it's over a month old, but I didn't know the real story behind the viral Facebook post, "PRIVILEGE IS!"  All I knew was that when I read it today, I was like, "YEAH, preach it brother!"  I know I am not alone in my frustration about the disparaging WHITE PRIVILEGE ideology that seems to be touted by BLM ignoramuses and millennial basement dwellers!  I am disgusted by  the video, like it's a public service announcement or something, that has a bunch of young people standing on a line and stepping forward of back depending on what type of privilege their family afforded them...and at the end of the short clip we are supposed to have learned about "privilege" No mention of hard work or sacrifices made my their parents and ancestors; nope just the ones standing in front--their privilege!    I am tired, oh so tired of knowing how hard my Italian immigrant father worked to make a good life for his family...all the sacrifices he made so that we didn't have to live the hard life he did back in the 30's just to have these mewling lewdsters tell me about privilege!  I am angry that anyone that supports the political narrative of the BLM movement would look at my nice house and well educated kids and claim this success was due to WHITE PRIVILEGE!  Do they know that my husband worked every day of the week, sometimes 12-14 hour days just to make ends meet?  Do they know that I shopped and still do, exclusively at thrift stores so that I could make sure all my children had shoes and clothes?  Do they realize that I used coupons and bought meat that had half-price stickers so that we could feed all of our children? AND I STILL DO!  This is OUR "White Privilege" and is shared by the majority of middle-income Americans.  Yes, us, that make up the general population of this country.  Those of us NOT on public assistance, those of us who don't get housing assistance, or free daycare or a plastic card to spend on what every type of food we want!  I'll call us, TAXPAYERS!

I wonder, considering, by the numbers, there are many more white people who don't fit into that "white privilege" category that, according to BLM, ALL WHITES get to enjoy!  As a matter of fact here are some statistics regarding White Privilege:
Medicaid had more than 70 million beneficiaries in 2016:

Do you think that all those White people on government assistance scowl when they see a successful Black person and think to themselves, "arrrg, Black Privilege?"  Come on, that is a very reasonable question considering all the "White Privilege" rhetoric being spewed these days!  Do all these White people on Medicaid or food stamps get to blame, "SLAVERY" on their financial situation?  Or can they just call it systemic welfare?  Because that is what it is.  Free money is a hard thing to let go of, even if it doesn't come to you in the form of cash, but in the form of housing, medical insurance, food, etc...and NO TAXES!  Nope, just the expectation of a yearly BONUS of THOUSANDS of DOLLARS they call a, "refund."

So about this mayor

I don't know how many of your saw this Social Media post, but I gave it a STANDING O!  Mayor Ben Rozier of Bloomingdale, Ga. who is very active on social media posted something that TRIGGED a few liberals, June 16th.  I can't seem to find what precipitated his comment and would LOVE to have the opportunity to speak with the Mayor because you and I both know he was of the mindset of, "YEAH, YOU WANNA KNOW WHAT PRIVILEGE IS!  I'LL TELL YOU!"  Believe it or not, even Mayors have their breaking point!

“Privilege is living in public subsidized housing where you don’t have a water bill, where rising property taxes and rents and energy costs have absolutely no effect on the amount of food you can put on your table.

“Privilege is the ability to go march against, and protest against anything that triggers you, without worry about calling out of work and the consequences that accompany such behavior.

“Privilege is having as many children as you want, regardless of your employment status, and be able to send them off to daycare or school you don’t pay for.

“Privilege is sending your kids to school early for the before school programs and breakfast, and then keeping them there for the after school program ... all at no cost to you ... paid for by the people who DO HAVE TO DEAL WITH RISING TAXES AND COSTS! ... you know, us so called ‘PRIVILEGED’ the ones who pay while you TAKE TAKE TAKE!”

Oh dear Mayor Rozier, I salute you!  Half the country that pays taxes to support these "privileged" people take our hats off to you! What you stated was the TRUTH that so few have the GUTS to put out there!  You deserve a medal in my opinion...but you did throw the Libs into a huge tizzy because for them, the TRUTH can NOT be said out loud.  Seriously, just listen to the contempt in this reporters voice.  How dare this Mayor voice his opinion!  He should just his mouth and let the "White Privilege" narrative keep tearing down us, non-colored folks.  We should feel ashamed, repentant and kowtow to the BLM for being White!  I am sick of it!

Back in the Spring of 2018, Mayor, Ben Rozier, is accused of racist comments on a social media post.  Evidently a Bloomingdale resident posted a video on the this little town's community Facebook page, showing a man blocking her car and other traffic.  The Mayor saw it and made a comment that he had informed the County Commissioner and the Police about the incident.  His concern? "Public safety!"   Well, let that not be the end of the story;  another facebook user posted, "I guess people are threatened by this mentally ill man because he's a big black guy."  OH goodness don't let a good narrative go to waste!  LET'S play the race card!

We all do some checking first

You know those times when someone makes a contentious comment on social media, and before we respond we do a little checking into who this person is?  Well, that is exactly what the good Mayor did.  Before he made his comment he did a quick look at the profile of this second poster, Aneesha Galore and found that she had put, as her profession, "cotton picker."  So, Rozier commented this to her blatant, RACE Baiting  post:  "he could be white, black or green. No matter."  But it wasn't until he finished with this: "Or a cotton picker." And the crowd went crazy!  How racist, how brazen, how rude of this Mayor to not succumb to race baiting!  How dare he call out what she put on her social media profile has her profession-->a "cotton picker!" Considering that he had already called out the colors this man could have been, by adding, Cotton Picker, he was simply pointing out that it wouldn't have mattered if it was YOU, Miss Galore, threatening innocent people in their car!  Oh and by the way, from what I can tell, Miss Galore claims to be a "Master Cosmetologist/Barber" on her Twitter account...if it's the same, Aneesha Galore, Savannah, Georgia, who also goes by the name, Waterfall Galore, then she ain't cotton pickin no more.  (Trying to sound like AOC there--how'd I do?)

But, again that is old news...but even old new can be resurrected to build upon a narrative.  I found this little tidbit on the "news" station WTOC, Savannah, Ga. right after the Libs went nuts of the Mayor's post in April, 2018:

Other Facebook commenters said "I don't understand why you would use a horrible racial slur, regardless of what she posted as her employment position. How do you justify that?"

Another wrote, "I was expecting something racist to pop up in comments, but I wasn't expecting it from an elected official of Bloomingdale."

Rozier said the comment was taken out of context. He explained, "I'm very active on social media. But if you go back and look at my history, I've never posted anything racist. I'm not racist."

HA HA HA, "horrible racial slur..."  Is this like how a White person CAN'T say the word, "nigger" but Blacks can?  Miss Galore can claim that she is a "cotton picker" but God forbid someone who is WHITE repeats it and because it is coming out of his typeface it is now considered a HORRIBLE RACIAL SLUR?  Folks, THIS, right here, is what we are sick of!  And believe it or not, it is not just White people that are sick of it either...a LOT of intellectually honest Black folks are also done with this race-baiting, race-card, double standards used by many Blacks to fabricate racial divisions that don't exist!  Savannahnow.com had to put their spin on it, June 17th, 2020  "This isn’t the first time a post from Rozier has drawn public ire. In 2018, he commented on a video that has since been removed from Facebook of a Black man blocking cars in the roadway. He called another commenter a “cotton picker.”  As Glenn Beck used to say, "THERE ISN'T ENOUGH DUCT TAPE!

So, KUDOS to you, Mayor Rozier!  And shame on all of those people who got offended at the TRUTH!  It is a privilege to live in section 8 housing, it IS a privilege to send your children to daycare for FREE, it IS A PRIVILEGE to be able to buy expensive sneakers for your kids because you a few extra bucks because you don't have to pay thousands of dollars to be on the Cadillac of insurances policies where you have no premiums, no deductibles, no out-of-pocket expenses, NO MEDICAL EXPENSES AT ALL!  These are just a few of the privileges that those who live off the Government, those who make it their career, those who have NEVER had a full time job in their lives get to enjoy. And for many this lifestyle is systemic and generational!  Welfare was NEVER intended to be a career!  Moreover, to NOT admit that you are PRIVILEGED AT THE EXPENSE OF US TAXPAYERS is certainly a slap in the face to us...to less than half of Working American who pay for over half of the country receiving "benefits!"  Although, things have certainly changed in the last few months, and now those who used to work are getting to see how just how easy it is to enjoy all those "privileges" that us who have worked through it all didn't get to enjoy.  You know, the "essential people" who DIDN'T get all these "privileges!"  FULL UNEMPLOYMENT with a bonus of an extra $2,400 a month thrown in...just because.  This is why so many businesses are desperate to hire employees, because these people don't want to go back to work...they have tasted the privileges and they like them!