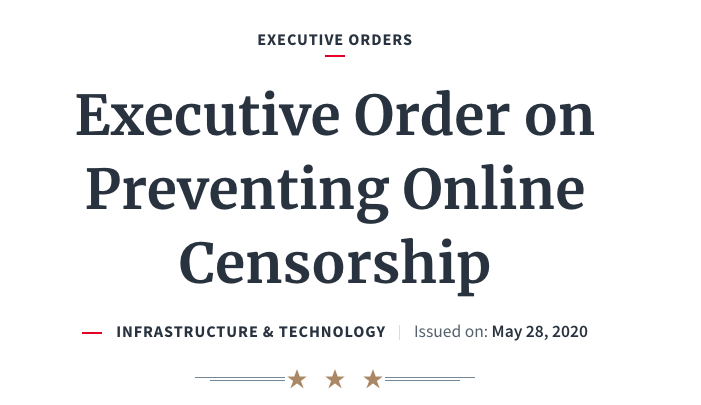 So the last time, last month I was put in Facebook jail was because I was writing about how our painting company has to adhere to OSHA regulations regarding masks.  I went into detail about how masks work, the size of the particles they filter out and that they won't filter out something as small THE COVID virus.  Well, unless you have on a full face respirator that is...but I haven't seen anyone walking around Walmart with one of those on lately!  Have you?  So, I was banned for 30 days and actually, I just got out of Facebook Censorship jail a few days ago.  ANNNNNDDDDD NOOOOOWWWW I am back in!  Seems like I am a serial offender of the FACEBOOK Community Standard Policies!  So what you ask...What horrible thing did you post this time Daniella?  Well, just let me share with you the harmful, COVID related misinformation that I posted yesterday!

I am going to go back just a bit to give some context to what we are all seeing happening now regarding the use of hydroxychloroquine. We all remember when President Trump told the World that he had heard of great results from this old drug called hydroxychloroquine. He said he had a "hunch" that this drug could be a "game changer" for people suffering and dying from THE COVID.  Fauci had a fit and completely disrespected our President...well because after all he has a VESTED INTEREST in the pharmaceutical  company who is making a VACCINE---Moderna!  The stock is up by the way!  So there were some doctors here in the US and internationally using HDQ and seeing great improvement in their patients.  THIS IS GOOD NEWS RIGHT?  BUT THEN...THE TRUMP HATERS START ACTING UP!

Back in May a few "medical professionals" wrote a paper, using data they did NOT personally investigate or collect claiming that hydroxychloroquine was a serious health risk and submitted it to one of the most esteemed Medical Journals--THE LANCET! The New England Medical Journal of Medicine, not wanting to be out done also jumped on this bandwagon.   Some other Doctors became extremely suspicious of this paper and began asking questions, A LOT OF questions as to the validity of the data used.  There was NO data!   Then in late June came this-->
"The retractions came at the request of the authors of the studies, published last month, who were not directly involved with the data collection and sources, the journals said.

“We can no longer vouch for the veracity of the primary data sources,” Mandeep Mehra of Brigham and Women’s Hospital, Frank Ruschitzka of University Hospital Zurich, and Amit Patel of University of Utah said in a statement issued by the Lancet. “Due to this unfortunate development, the authors request that the paper be retracted.”  ~statnews.com

So basically they write a paper, using someone else’s data, attempting to discredit Trump and there is no actual data...it is all unsubstantiated, unverified!  Russia?  Can we call this the Covid Dossier?

"Science: Two elite medical journals retract coronavirus papers over data integrity questions
“In the first big research scandal of the COVID-19 era, The Lancet and the New England Journal of Medicine (NEJM) [Thursday] retracted two high-profile papers after a company declined to make the underlying data for both available for an independent audit, following questions being raised about the research. The Lancet paper, which claimed an antimalarial drug touted by President Donald Trump for treatment of COVID-19 could cause serious harm without helping patients, had had a global impact, halting trials of one of the drugs by the World Health Organization (WHO) and others…”~ KFF.org

THIS IS KIND OF A BIG DEAL!   a "scandal!"  Is anyone paying attention? cause I sure am!

Because the WHO (World Health Org) got their grubby little fingers on this Lancet paper as well as the "study" in the New England Journal of Medicine,  they put out a statement:

"The World Health Organization announced Wednesday it is dropping hydroxychloroquine, the malaria drug backed by President Donald Trump, from its global study looking at potential treatments for the coronavirus...The announcement is likely to further dampen hopes the drug is helpful against the coronavirus.

The drug generated excitement earlier in the year after a handful of small studies suggested it could be beneficial. Trump promoted it as a potential treatment for the virus and said he used it as a preventive measure against the disease.

However, several larger studies showed the drug was not helpful and caused heart issues in some patients. A recent study published in the New England Journal of Medicine found hydroxychloroquine was no better than a placebo in preventing coronavirus infections."  ~CNBC.com

"And THEN the Food & Drug administration, using the same unverifiable  information that the Lancet and the New England Journal of Medicine had just RETRACTED!  OMG really!

On Monday, the Food and Drug Administration announced it was ending its emergency use authorization for chloroquine and hydroxychloroquine after concluding the drugs were “unlikely to be effective” against Covid-19.

NO DATA AND EVERYONE BELIEVES THE LIES!

Even when this is called a "Scandal"-->“In the first big research scandal of the COVID-19 era, The Lancet and the New England Journal of Medicine (NEJM) [Thursday] retracted two high-profile papers..." No one is paying attention that Politics is taking precedence over the well being and LIVES of people!  God forbid that Trump's hunch was correct and the suffering and even deaths could be avoided!  But NOPE!  Let's just listen to the opinions of "medical" professionals who put their name to a CLINICAL Paper that had absolutely NO VERIFIABLE DATA!  I just want to scream, RUSSIA RUSSIA RUSSIA!  Except people weren't suffering and dying from that scam!  But for SURE, this is a political stunt!  AND THIS CRAP MUST STOP!  WE must stop it!

Sometimes, I guess most of the time, I just know that my readers have an attention span and an intellect longer and bigger than that of a gnat.  I know that there are intellectuals reading this who are piecing it together.  So, this brings me to FASCISTBOOK, THEIRTUBE and TWATTER !  We have witnessed post after post after post go AWAL!  We have seen our friends and family members put under a GAG Rule for days, weeks, a month and some permanently banned, simple for sharing what EXPERTS, SCIENTISTS and DOCTORS are saying about the COVID, MASKS, and HYDROXYCHLOROQUINE !  Man, I tell you what, it feels so good to have my own website where I can actually say (for now) whatever the heck I want, without fear of being silenced!  I can post about what a Yale Professor, Harvey Risch says HDQ cures Covid-19!

I HATE FACEBOOK AND YOUTUBE BUT IT IS THE WAY TO GET INFORMATION OUT TO THE MASSES!

Here is what I posted that got me thrown into Fascistbook Solitary for another month--2 sentences back to back! 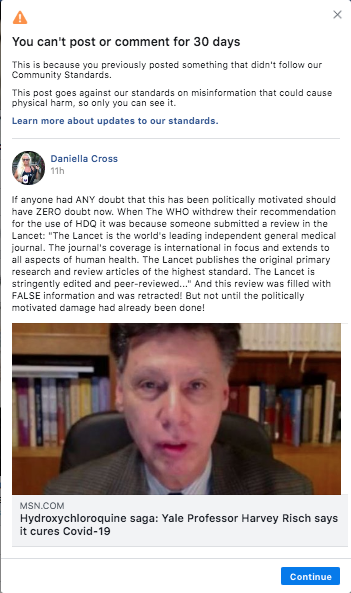 I am a Facebook criminal for sharing the TRUTH!

Oh really, so this guy, "a professor of epidemiology at Yale School of Public Health, I have authored over 300 peer-reviewed publications and currently hold senior positions on the editorial boards of several leading journals." ~MSN news by ZUCKBOOK standards is spreading "misinformation"  that could "cause physical harm."   They didn't take me down, I'm a nobody, they took a reputable professor down!  My comments did NOT violate ANY Facebook community Standards.  So it seems that the ZUCK MAN has elevated himself even beyond Bill Gates' pretend Ph.D./MD in infectious diseases, viruses and vaccines!    I am just so sick of this crap!  And the absolute last straw for my back was when Facebook, Youtube and the TWAT took down the Video of the Frontline Doctors sharing their experiences with HDQ and their personal opinions as they held a Press Conference at the steps of the SUPREME COURT!  A place where our constitutional rights, like the right to FREE SPEACH are UPHELD!  Ironic!    Arrrrggggg...so please take a minute to read what a Liberal news outlet (MSN NEWS) put online-->CLICK HERE.

TIME FOR A CLASS ACTION LAWSUIT!  I'M ALL IN FOR THAT!  ARE YOU?

It's time for, WE The People to stand up to this FREE SPEACH abatement by this Social Media Giants!  If you want to take a look at the Government Grants and Subsidies Facebook receives, look here! 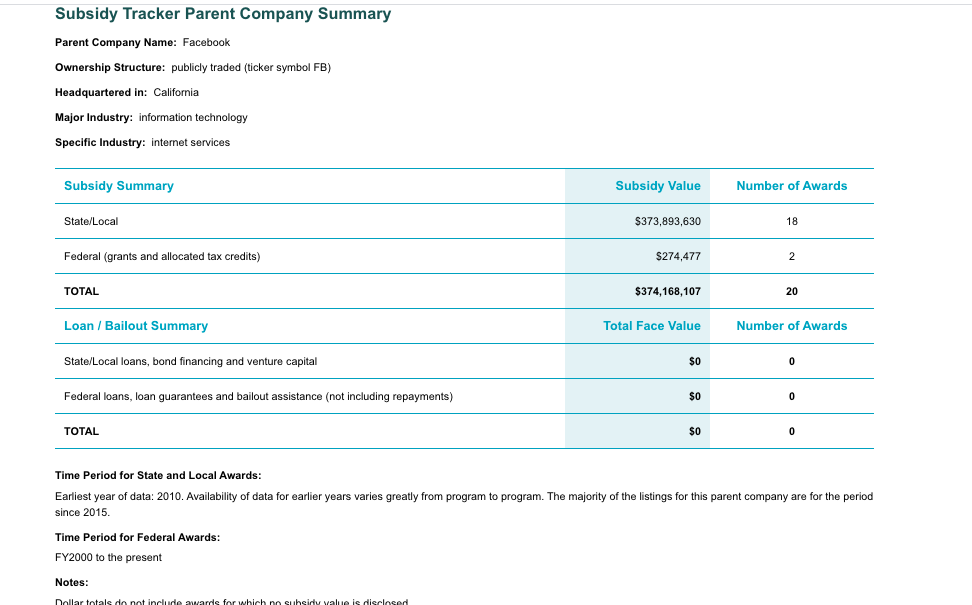 Here's the deal Facebook, if you are taking even ONE friggen penny out of MY POCKET you sure as heck are NOT going to censor me when I am NOT going against YOUR COMMUNITY Standards by posting the truth and or my opinion on any subject!  You are a highly influential, public square and you may be a private entity, but just like Ma Bell was taken down, so can you be!

SEATTLE MAYOR JENNY DURKAN SCREAMS “NOT AT MY HOUSE!” AS COUNCILWOMAN-KSHAMA SAWANT LEADS BAND OF VIOLENT SOCIALIST MISFITS TO HER HOME!