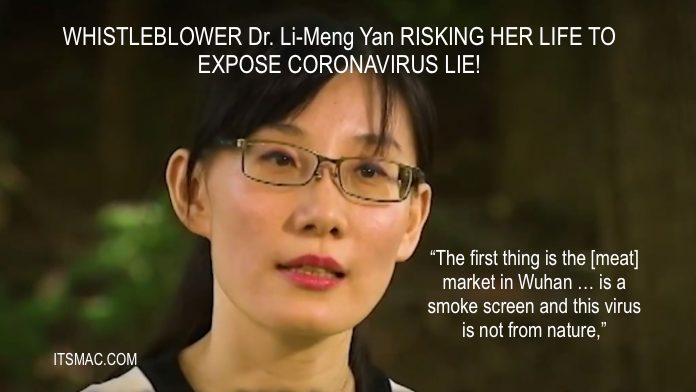 Aren't we supposed to believe the "Whistleblowers?"  Aren't they supposed to be heros who can NOT be questioned as to the validity of their claims?  I mean come on people, we were forced to believe the guy, the democrat, the former Comey cronie when he claimed to the world that he "overheard" Trump was guilty of "quid pro quo" with the new President of Ukraine.  Basically, I will give you money if you dig up dirt on Biden.  And even though it was all fake...this Whistleblower was called a hero by the Left and his identity protected.  "BELIEVE THE WHISTLEBLOWER! "WE MUST IMPEACH THE PRESIDENT!  BELIEVE THE WHISTLEBLOWER!

This whistleblower is claiming something President Trump claimed months ago...the Coronavirus was created in a Chinese lab! It seems it is the political obligation of social media giants like Facebook to kill the story, to claim it as fake to destroy the life of the credible scientist who is making the claim!  RELEASE THE FACT-CHECKERS!   SHUT HER DOWN!  KILL IT DEAD!

It's interesting that our country went on a 2 year moment of insanity, investigating our President over a FAKE Document that was bought and paid for by Hillary Clinton...The Steele Dossier--containing allegations of misconduct, conspiracy, and cooperation between Donald Trump's presidential campaign and the government of Russia during the 2016 election. It was 100% FAKE! Made up! And was the first coup attempt on an American President by the opposing side IN US HISTORY. Facebook had no issue and still has none if people post ANYTHING about this fake document or President Trump "allegedly colluding with Russia" post to your heart's desire!  Everything the Democrats did was illegal and hopefully, we will see many of them going to prison. But Facebook and the Media pushed this lie for 2 years!

Then, when all of those lies failed, there was this WHISTLEBLOWER, whose name could not be revealed for his safety and protection (but we all knew it) who claimed that Trump threatened the President of Ukraine which lead to a FAKE impeachment. Social media outlets like Facebook not only encouraged people to spread this fake information, they participated in it!

But NOW, we have a verified scientist appearing on a MAJOR news network BLOWING THE WHISTLE ON THE creation of the C--Rona and when that Fox news report is shown on Facebook, it is removed with the Caveat that it is "partly false" and is a "baseless claim!"  What if CNN had aired it? 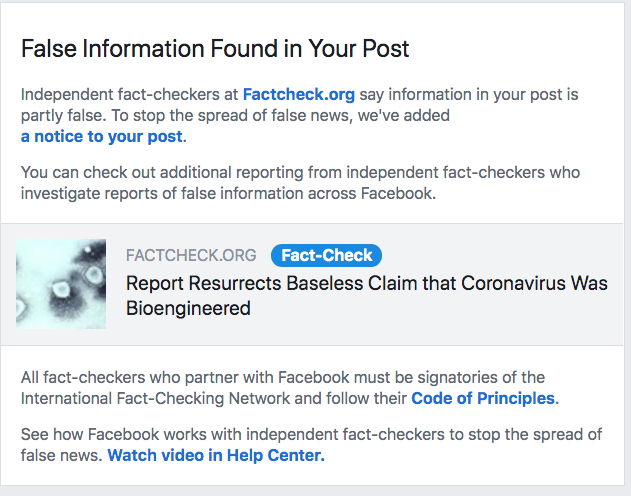 Well, the Russia Probe, spending tens of millions of our Taxpayer money was the biggest lie in US history!  And it was pushed on by the Liberal media and Social media giants like Facebook.  It has been 100% proven to be a LIE and disinformation, but when Conservatives took to the interweb to share the truth, we were censored and our posts were removed!  We all unfairly endured the same censorship when a Democrat, Comey Cronie partner (Whistleblower) LIED and claimed President Trump was involved in some type of salacious activity with President Zelenski of Ukraine.  ALL FALSE, but the media, including Social Media, pushed this LIE as hard as they could!  Anything the Conservatives posted to the contrary was subject to censorship and removed if it contained too much truth. The Media monsters, including Social media outlets like Facebook were complicit in the COUP attempt to overthrow our duly elected President!  They are all guilty of collusion!

LISTEN TO THE WHISTLEBLOWER!

"The virologist — who claims she did some of the earliest research into COVID-19 last year — has previously accused Beijing of lying about when it learned of the killer bug and engaging in an extensive cover-up of her work...In April, Yan reportedly fled Hong Kong and escaped to America to raise awareness about the pandemic. She is said to have been hiding over fear for her safety." ~NYPOST

So we are told to NOT believe this scientist!  Why?  She is literally risking her LIFE to tell the truth.  And she is NOT the only one either. Several other scientists came out at the beginning of this "pandemic" and claimed the exact same thing, but they were immediately silenced!   Aren't we supposed to listen and believe the whistleblowers?  Actually, NO, we ONLY are to believe them if they can destroy President Trump!

My prayers of safety go out to Dr. Li-Meng Yan.  She is taking a huge risk to her career and to her LIFE, by coming out and blowing the whistle on the truth behind the Wuhan Virus!  The Liberal media is going to try to crucify her...because...she is telling the truth!

SYSTEMIC RACISM IS A LIBERAL LIE AND CHICAGO PROVES THAT!