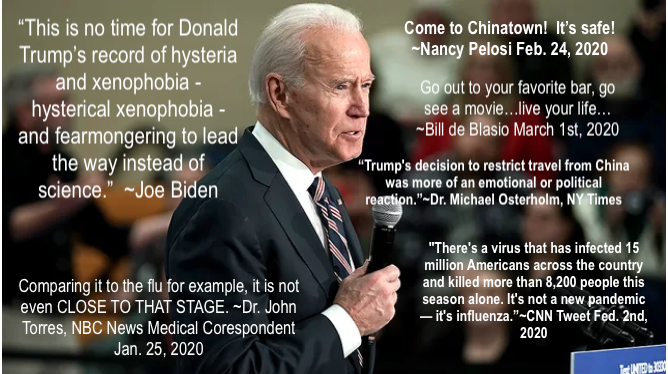 Remember when geriatric Joe held a little get together telling a bunch of seniors that Trump's travel ban to and from China was "Hysterical Xenophobia?"  Although he barely was able to articulate the words, Hysterical Xenophobia, as those are two very big words to say...he barely managed.  The video below was taken Jan, 31st, 2020

Most of the country was much more interested in the ridiculous Impeachment trials that the Democrats brought against President Trump, Jan. 16th, 2020 than this virus.  President Trump however, unlike any of the Democrats was all over it.  On Jan. 6th, the CDC issued Travel warnings to US citizens traveling to China, on Jan. 16th, the US begins to screen travelers arriving to the US from China.  OMG, HOW DARE WE DO SUCH A THING! (Say it like Greta)  Jan. 21st, 2020, the first US case was a Washington State resident who had just come back from China.  Trump tells country not to panic.  Jan. 31st, 2020 Trump issues a China travel ban. Then on Feb. 26th we have our first "documented" case of community spread of the Coronavirus.  That means, someone who had not gone to China but was exposed in the States.  Meanwhile, President Trump sets up the Coronavirus task force, and forces the FDA to allow for more testing for the virus.  And all of this was done during Trump's impeachment trial!

While President Trump was trying to deal with an impeachment trial directly on the heels of the Russia Russia Russia hoax he was also being briefed on the Coronavirus and dealing with this pandemic.  In true Presidential form, although a lot was going on behind the scenes he was trying to keep the American people calm.  Trump knew that this was a serious situation as he gets intel that people like Nancy Pelosi, Joe Biden and Mayors like, NYC Mayor Bill De Blasio don't get.  We know this first hand as Joe Biden accused President Trump of acting like a "Hysterical Xenophobia" when he suggested a travel ban on China.  Nancy Pelosi jumped on board the "don't panic" train when she visited San Francisco's Chinatown on Feb. 24th, 2020, encouraging tourists to come to Chinatown.  Although, like Biden, she does not quite have a grasp on all her faculties, especially remembering words...she emphatically told people, in late Feb. to come to Chinatown, it's "safe...come join us!"   Even, the Major news network CBS, is claiming a drop in business in Chinatown over concerns regarding the Coronavirus and this newscaster is REALLY pushing Pelosi's agenda that it's completely safe to visit San Francisco and Chinatown as there have been NO cases there.  100,000+ cases and over 1500 COVID deaths later...now Pelosi is blaming President Trump for his lack of concern or response. Weird right?

So, on Feb. 26th, 2020, we have the Mayor of NYC, Bill de Blasio commenting on the hospital bed capacity in NYC:

“We’ve got a long time to ramp up if we ever had anything like that [kind of crisis]. So, the capacity we have right now is outstanding given the challenge we’re facing right now...We can really keep this thing contained." ~Bill  de Blasio, Washington Post

On March 1st, NYC had its first confirmed case of THE COVID.  "The next day, Gov. Andrew M. Cuomo, appearing with Mayor Bill de Blasio at a news conference, promised that health investigators would track down every person on the woman’s flight. But no one did."~NYTimes

"Mr. de Blasio urged the public not to worry. 'We’ll tell you the second we think you should change your behavior,' the mayor said on March 5. For many days after the first positive test, as the coronavirus silently spread throughout the New York region, Mr. Cuomo, Mr. de Blasio and their top aides projected an unswerving confidence that the outbreak would be readily contained...'Excuse our arrogance as New Yorkers — I speak for the mayor also on this one — we think we have the best health care system on the planet right here in New York,' Mr. Cuomo said on March 2. 'So, when you’re saying, what happened in other countries versus what happened here, we don’t even think it’s going to be as bad as it was in other countries.'”  NYTIMES

March 15th, in similar fashion to Pelosi's urging people to get out to Chinatown, de Blasio told the citizens of NYC, "If you love your neighborhood bar, go there now."  Perhaps he encouraged this because he knew that the very next day the city would be in LOCKDOWN!  So why the heck not...go out and party!  After all, we can simply blame President Trump when New Yorkers start dropping dead!  NOT OUR FAULT!  de Blasio went so far, on March 10th to down play this virus claiming that; "there is very little threat here...this disease acts like the common cold, or flu, and transmission is not that easy..."

Oh, and if we are wrong about this...JUST BLAME PRESIDENT TRUMP!

NY City accounted for 1/3 of all Coronavirus cases in our country.  We closed down an entire THRIVING economy because of the inept government of NEW YORK!  Do I think that the majority of deaths were caused by this virus?  Heck NO, NO I DON'T...but I think that the corrupt government of NY saw a potential to get some serious Federal money out of this crisis!  But let us NOT forget how the Governor and especially the Mayor of NY city handled this virus and the audacity of them to blame President Trump!

But what most won't hear, is the TRUTH!  We have the Joe Biden calling the President a Hysterical Xenophobic in one breath while in the other, very slow exhale accusing him of taking too long to act...and Nancy Pelosi  emphatically calling  for people to get out there and visit Chinatown, because, well, it's safe, but then calling President Trump,  "irresponsible"--"down playing the severity of the virus" and  "Not leading this country!"  We also had the media monsters stating that this virus was nothing to worry about!

But here, here is a bit of TRUTH!

I sincerely hope when it comes time to vote, that people choose TRUTH over Biden!  Facts over Pelosi and what is REAL over the Media!

You Ain’t Fleek if you Ain’t Woke!