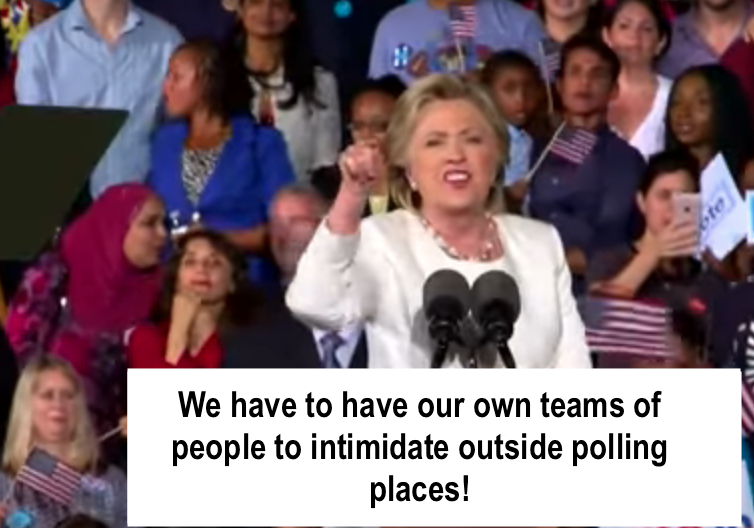 With nothing but, she says so, Clinton demands that “We have to have our own teams of people to counter the force of intimidate that the Republicans and Trump are going to put outside polling places.”

“Joe Biden should not concede under any circumstances because I think this is going to drag out and eventually I do believe he will win if we don’t give an inch and if we are as focused and relentless as the other side is!" ~HILLARY CLINTON, Aug. 24, 202

What does this mean exactly?  Clinton went on to say, “We have to have our own teams of people to counter the force of intimidation that the Republicans and Trump are going to put outside polling places.”  Seriously Hillary, intimidation?  You mean like Liberal sponsored ATIFA or the Marxist terror group, BLM?  Are you anticipating a bunch of conservatives out at the polling booths looting, destroying property and killing people to get a Trump vote?  Keep telling the BIG LIE!  So you might say that I took liberties with her quote on the featured image, but that is EXACTLY what she is saying.  She knows darn well, that there will be NO Trump supporters "intimidating" voters outside polling places.  She must have forgotten that it is not the Conservatives looting, burning, destroying and being fascist little punks trying to silence...no, those are the Liberals!  In my opinion, Hillary is calling for polling place intimidation...she is stating that the Democrats get their, "own teams."  I would have to imagine, knowing how destructive and violent the Liberal Left has been lately, that when Clinton says, "force of intimidation" that the "Republicans and Trump are going to put outside the polling places" she is referring to those horrible, racist, police and security guards that will be there to protect citizens against Clinton's call for a "counter" force.  So, well, the opposite of the police are ANTIFA!   Is this ONLY obvious to me?

Sounds to me Hillary, like you are not just predicting this election to drag out, but you and your Democrat cronies will make sure that will happen! If force and intimidation don't work then it's going to be the mail in ballots! This was and still is the major reason we didn't want mail in voting encouraged like the Democrats want.  The plan is obvious and has been from the very beginning of the mail in ballot scheme, and mark my words, the Democrats are already planning on how to use these mail-in ballots as their next HOAX!   But what irritates me the most, well, as of late pretty much everything, but what really chaps my hide is the Democrats and the liberal media crying hysterically, JUST LIKE THEY DID IN 2016, that if Trump loses he will not concede peacefully and hand over power to the new president.  You've really got to be kidding me!  This isn't about Trump, this is about a Biden loss which is inevitable.  But thanks for giving us a heads up on what's to come when he does lose...more Democrat hysterics!  Remember it was THEM that pushed the mail-in ballots.

Let's go to the remembering machine for a moment and listen to Obama trash talk Trump right before Trump won the Presidency of the United States.  Obama laments over the FACT that no one can rig a US election...but, how long did it take for the Democrats to accuse Trump of colluding with Russia to win the election?  Literally just days as they had already been setting that coup up for months...just in case!

Will Biden refuse to concede election if he loses!

The Democrats were so sure that Trump was going to lose the election that Hillary didn't even have a concession speech written! Podesta had to go out to her fans and say, "We lost!"  However, the Democrats were constantly pushing the media to report that Trump was NOT going to let go "when" he lost and that his fans were going to go berserk!  There was NEVER a mention of what would happen if Hillary lost...well, because, that wasn't supposed to happen.  The FBI, DOJ, CIA and the Obama administration forgot to dot an i and cross a t in their attempt to rig the 2016 election for a Hillary win.   This was the MAIN reason that Obama gave his belittling speech right before the election, because he NEEDED to set the stage that Hillary was going to win, Obama knew exactly the kind of rigging that was going on that Trump was accusing the Democrats of.  Hitler described this tactic as große Lüge--The Big Lie...the insurance policy!  And our country suffered greatly from the schemes of the Democrats.

And now we are seeing the exact tactic being used again...the truth being twisted and an agenda being pushed.  And so, instead of a peaceful transfer of power to President Trump, the Democrats drug our country through years of a Russia Collusion hoax and then an insane impeachment trial! There was NEVER a concession from the Democrats and now we hear Hillary advising Sleepy Joe to do everything but CONCEDE when he loses. She is setting the stage for MORE social unrest and this time it will be over "mail in ballots!"  She is already telling the country how this is going to go down...how the Democrats are planning their strategy for all the useful idiots out there.

So there we have it.  The Democrats already know that they will lose but they are preparing their supporters to do whatever is necessary to fight.  In true Marxist form, they will accuse their enemies of what they are doing or intending to do.  We saw this clearly with the Russia hoax and the Impeachment LIE involving Ukraine.  In both of these instances it was the Democrats doing the dirty deeds, but if you tell a BIG enough lie, the Democrats will believe it.  What Hillary is really saying here, is that the Democrats need their ANTIFA and BLM cronies to be at the polling booths to dissuade Trump voters. "We have to have our own teams of people to counter the force of intimidation that the Republicans and Trump are going to put outside polling places."  Hillary knows what she is saying is a lie regarding conservatives intimidating voters, but what she is REALLY CALLING FOR is protests, riots and Liberal "intimidation" and chaos at voting places so that people WILL BE TOO AFRAID TO GO! This is exactly the Marxist tactics that they use and have used for well over a decade now. Do not be deceived, we most certainly will see violence and intimidation at polling places bought and paid for by the Democrats and their all too willing sponsor, George Soros!  Be assured that we will see bad actors being paid to cause chaos!  Pay an ANTIFA member enough and he will shave his head!  THIS you can bet money on!

And this is how a politician reacts when they thought they had it rigged and believed their own lie!  So hold on and get ready to deal with a VERY POWERFUL woman scorned yet again!  This time through Joe Biden.

The Democrat Party MUST Fall, Not the Statues!