You will notice that I have changed the name of the virus to protect the innocent reposter from the rabid "fact-checkers."

I used to believe that Reuters was a reliable source of information...but now they have jumped into the ultra Bias "fact-checking" arena.

As the year has progressed, most of you know that I have watched the "death" numbers of the KA-RONA very closely. It was made known to the public, in April, by Dr. Deborah Birx that the death count was going to be inaccurate, perhaps by 80%  or more, due to the fact that all deaths were going to be scrutinized to market as a KA-RONA death. WE WERE TOLD THIS, so there should be no surprises when the US mortality rate numbers come out and the numbers clearly show that we are currently below the death rate for the 2017/18 and just slightly above average from 2015-2020.

You see, death rates can't lie...you're either dead or alive...death is no respecter of the cause, it is what it is...death. That being said, and hopefully understood by even the least intelligent among us, the numbers are the numbers. There is NO, "mostly dead." So, as I am reviewing the various sites that show the mortality rates from 2015-2020, it is evident that we are currently just slightly above the average US mortality for the highest mortality months, Jan-April.

How can this be, you say? The KA-Rona has killed over 200K people this year, so the US death rate should reflect that very large, fear-mongering number...right? Ok, I am simply going to let you use your logic and critical thinking to come to the obvious conclusion and perhaps stimulate you to do some research. Which brings me to the reason I am writing this. When we look at those numbers and compare them to the recent confession of the CDC that only 6% of all deaths recorded actually died from (only) Covid, that slight increase in deaths makes a lot of sense. When we experience a bad flu year, people die.  However, when we are experiencing an election year, MORE PEOPLE DIE of a pandemic.  Are you picking up what I am writing down? 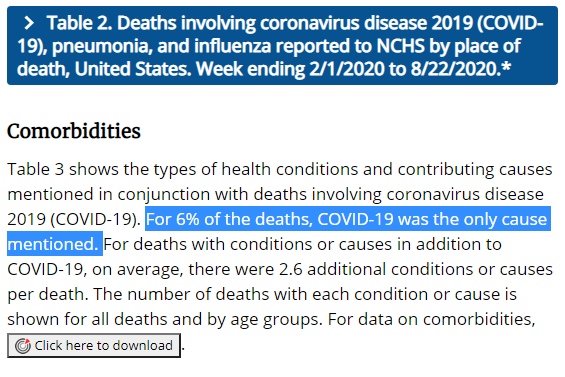 In this "fact-checking" article by Reuters, dated, May 14th, 2020, their conclusion to the numbers was listed as: "VERDICT--Partly false. Data reporting the weekly death count in the first 16 weeks of 2018 and 2019 is accurate, but data from 2020 is still under revision. It is too soon to determine how the tally of coronavirus-related deaths will affect these overall figures."

Now mind you this was written in May, and as of May the numbers were spot on, but those awesome little fact-checkers, did something odd...they wanted to wait until all the facts were in before they DIDN'T feel the need to Censor a Facebook post. I find the use of the words, "under revision" interesting though...It's now a day shy of Oct. and how has the CDC, REVISED the KA-Rona death numbers? Dead is dead and we are still just slightly above the US average from the last 5 years and slightly less than that of the death rate in 2017/18.

How to deal with the truth?

The firestorm that precipitated from that CDC post (6%) had all the "fact-checkers" scrambling to extinguish millions of Tweets and Facebook posts, claiming that the public simply misunderstood what the CDC was actually saying and that us ignoramuses are simply too stupid to comprehend what we were reading, and HOW DARE President Trump Tweet about this 6% number!  Here is a response from Factcheck.org:

How dare you expose the truth!

"For the week referenced in the claim, the CDC explained that the chart “shows the types of health conditions and contributing causes mentioned in conjunction with deaths involving coronavirus disease 2019 (COVID-19). For 6% of the deaths, COVID-19 was the only cause mentioned. That means that 6% of those who died with COVID-19 through Aug. 15 didn’t have any other reported conditions."

Plato had it right when he said, "Science is nothing but perception."   So, if the media, our politicians, including President Trump and our fact checkers keep propagating a KA-RONA death rate at 206,000 that is certainly the perception that people will have... I BELIEVE IN SCIENCE!