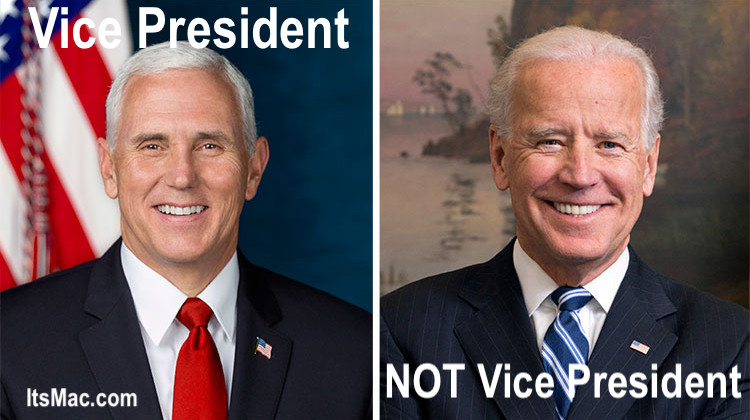 One is our Vice President, one is NOT!

I understand the decorum for using the title, Vice President, even after one is out of that office.  However, it seems that it would have been much more politically correct, under the circumstances for Chris Wallace to have referred to Joe Biden as, Mr. Biden, NOT, Mr. Vice President.  Not only was it a rude gesture to our current President but it was extremely confusing to those watching the Presidential debate who may not have the slightest clue who our current Vice President actually is...YES, those people do exist!

Now as Jimmy Kimmel yucks it up with his audience, bashing Vice President, Mike Pence, he takes to his Liberal Streets to show us exactly how uninformed these Liberals really are.  AND THESE ARE POTENTIAL VOTERS!

I am hoping that whoever moderates the next debate uses a little common sense, less bias and refers to Joe Biden as, Mr. Biden because in this forum, a Presidential debate, Biden is NOT the "Vice President" he is simply a man running for President who once was our Vice President.

Ok, so if you're still not convinced that people don't know who the Vice President is, here's one more.

So please, let's not confuse these poor liberals any more than necessary.

NEW COVID HOME TEST CAN NOT TELL DIFFERENCE BETWEEN A COLD OR COVID!

A BLACK WOMAN SLAMS HER DEMOCRAT ATTACKERS! WATCH OUT D-CONGRESS YOU HAVE A DEFECTOR!