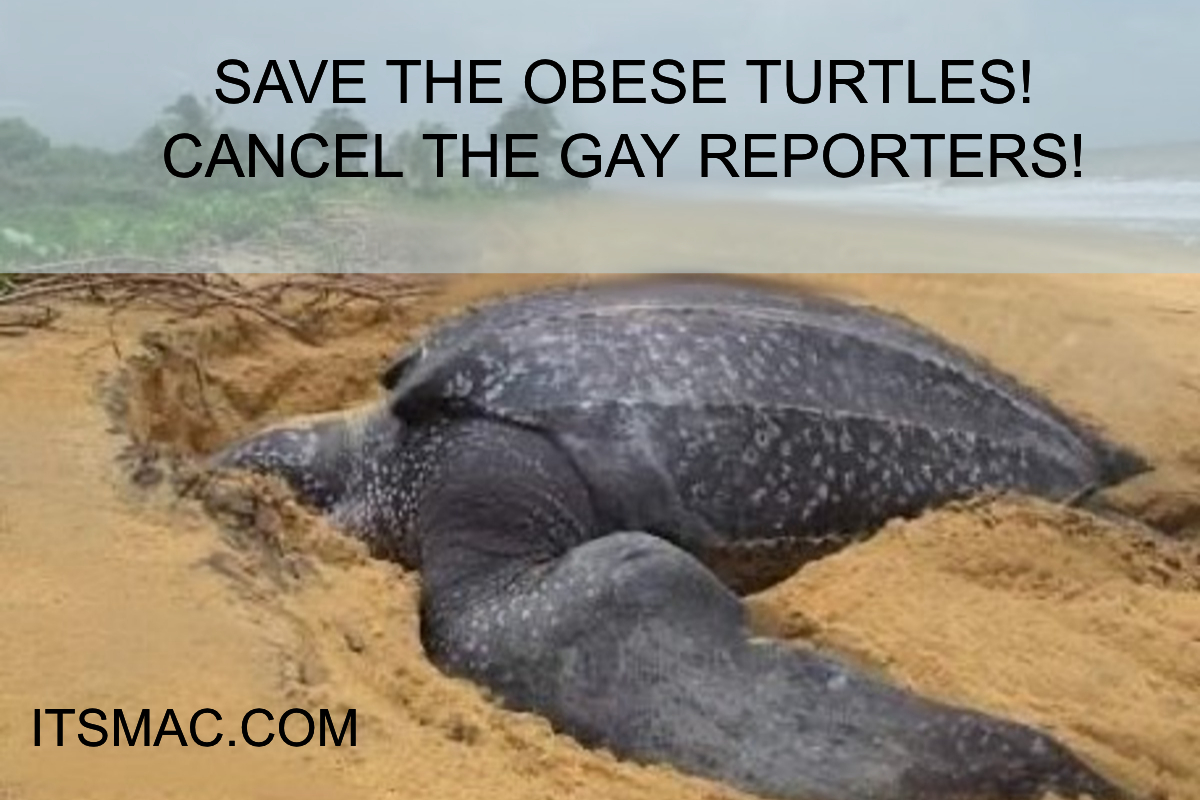 Save the Obese Turtles and FIRE the Gay newscasters!

Which part of my Byline is more offensive?  I guess that all depends on which side of the Political spectrum you stand on.  By all means, BOTH descriptions should be offensive!  Right?  I mean, should a "professional" news reporter be FAT-SHAMING the President of OUR United States?  The man who controls this country?  The man who is responsible to keep peace or make war?  The man who is ultimately responsible for the safety for roughly 330 MILLION people!    How well does that type hateful comment "we see him like an obese turtle, on his back, flailing in the hot sun..." go over for all the millions of people who support President Trump?  What about Homosexual reporters?  To the vast majority of Conservatives in this country, HOMOSEXUALITY is much more REPULSIVE than a 6'3" person who weighs 243 pounds.

So, can this be our new catch phrase for the millions of fat people in this country?  "OBESE TURTLE?"  COME ON MAN!  If Mr. Cooper can say a shaming slur about the President of the United States, and it's ok, then anyone is fair game.  How about other politically incorrect, HATE Speech like, Oh, I don't know, maybe, Faggot!  Can we say that now in public, to the world, on the NEWS, maybe about some CNN news reporters?  Can we say that we see them as, DISGUSTING, aids spreading rodents?   I mean, can we?

What if we had a homosexual president and used hateful slurs?  Would it be OK to do so? Could we say, "like a aging queer, buns up, flailing on his beach ball!"  Are Gay reporters now fair game to shame and humiliate?  Sounds to me like, GAME ON!  Furthermore, I have never considered President Trump as "Obese" although a quick google search for, "fat reporters" will show you the grith of that reality!   Lots of OBESE reporters!

If this post offends you...IT SHOULD!  We are constantly chastised by the Left, by the Media, to be politically correct; NO fat shaming, NO gay shaming... The Mainstream media, especially CNN, is on the constant attack towards our President for every single word that comes out of his mouth and sometimes he does put his foot there...but we all know, unlike the behaviour of some reporters, what disgusting, fecal contaminated thing, he DOESN'T put there!

SEATTLE MAYOR JENNY DURKAN SCREAMS “NOT AT MY HOUSE!” AS COUNCILWOMAN-KSHAMA SAWANT LEADS BAND OF VIOLENT SOCIALIST MISFITS TO HER HOME!