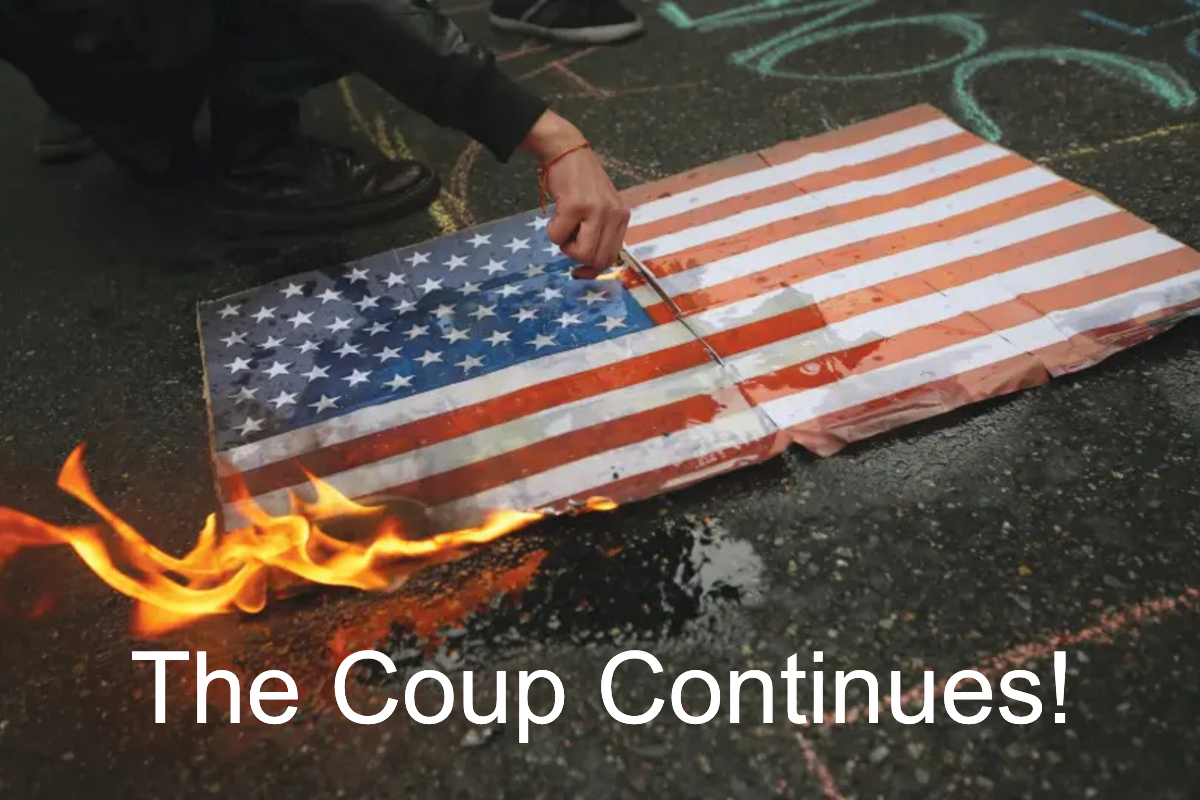 For about 3 months we have listened to the mainstream media and the majority of Democrat politicians say these words: "Why won't Trump say he will concede the election?" There was NEVER the words, "If he loses." For MONTHS now that seed has been planted into the minds of the world. It was like they KNEW that the election was going to be fixed! They saw the THOUSANDS of people attending the Trump rallies, they witnessed all the boat and car parades, they knew the red wave was coming!  And they also knew that unless they cheated that Biden didn't have a chance in hell to win this election.  We all knew this!

You see, the reason they planted that psychological seed is; unlike the 2016 elections, they didn't know that Trump had so many supporters. They simply were unprepared for him to win.  But this time they knew and they were prepared. THIS is why we heard OVER and OVER again, "Will Trump concede the election?" Never, ever stating, "if he loses."  The media was beside themselves that Trump would just say, "We'll just have to see how it goes."  Why in the world would he play into their psychological games?  It was obvious he was going to win, and win by a landslide!

"IF the elections happen in November, he won't concede."  First of all was this a slip of the tongue?  "If the elections happen?"  And then why would this guy be talking about Trump "conceding" an election that is weeks away?  Why were all the people in the Media Mob saying this?  To program us?  To get the SETUP ready in the minds of the American people....the WORLD?  No one asks a candidate that is a shoo-in if he will concede, NO ONE...unless they know something or are planning something.  No one ask Obama this, or Hillary, or ANYONE else running for the Presidency of the United States.  And even though, it was quite obvious that Sleep Joe would lose, it was NEVER asked of him.  Why not?

Let look at the entire MSNBC report.   And remember, this was in recorded back in September.

"President Trump wins millions more votes than he did in the 2016 election. The enthusiasm for his rallies was unlike anything I personally have witnessed in my entire life. He wins the largest percentage of non-white ( minority) votes than any Republican presidential candidate since 1960, helps the Republicans actually GAIN more seats in the House of Representatives, helps the Republicans to retain the Senate when they had to defend nearly twice as many seats as did the party of Marx, etc, and yet somehow, in spite of clearly helping the downstream ballot races, he manages to (maybe) lose the election to what will become the oldest man ever to assume the Presidency; a man who could barely draw flies to his few campaign rallies; a man who spent most of his time hiding in his basement; a man who is obviously deteriorating cognitively and a man who has chosen the most leftist leaning Senator in the Senate as his running mate. Oh sure, I completely see how that could happen...."  ~Dan Norcini

You see, in the real world, this just doesn't happen...unless there are some serious shenanigans going on.  This is just the continuation of the coup d'état that started before Trump won the 2016 Presidential election and continued on with the Russian Collusion Hoax perpetrated by the Obama administration's FBI, CIA, DOJ, as well has the now famous FAKE, Steele Dossier that was purchased by Hillary Clinton.  And then the "whistle blower" who was backed by the Democrats to create a smoke screen for Joe Biden's illicit dealings with Ukraine & China with lots of money involved.

So just as the debates are heating up and our Attorney General is hot on the heels of Hunter and Joe Biden, and the press is desperately trying to plant their seed that Trump won't win, a monkey wrench is tossed into the mix...THE LAPTOP!

So now it appears that the media's prophetic seed sowage is coming true, OR IS IT?

WAS THE TRUMP PLAYED?

I don't think so.  This man is more clever than any fox out there.  He seems to always be several steps ahead of the nefarious, evildoers.  He knew and he told us that this was going to happen.  You just don't win so many seats in the House of Representatives and not win the election, that simply doesn't happen, unless there is a LOT of cheating going on.

Here is another extremely prophetic example of a Liberal agenda, and although this statement is the ONLY positive statement made in this article by the Business Insider, written in September, 2020: "We don't know what kind of shenanigans Democrats will try leading up to November," Murtaugh told Insider in July. "If someone had asked George W. Bush and Al Gore this same question in 2000, would they have been able to foresee the drawn out fight over Florida?  The central point remains clear: in a free and fair election, President Trump will win."  The rest of the article is like they KNEW EXACTLY what was going to happen.  It was actually really weird reading that Business Insider article...it was like they had a crystal ball or something!  Seriously, go read it!  It is, what is happening right now, to a tee!

So, if all of these people knew how Trump felt about fraud regarding mail-in ballots, I have to assume that President Trump has a plan to combat these Trolls.  After all he has been at battle with them and winning for almost 4 years now, I don't expect him to lose this battle now.  Let's not forget the Laptop.

And now, let's just see how it goes.

DOES THE BIBLE SPEAK OF “THE MASK”? A MESSIANIC JEW EXPOSES THE TRUTH–THE MARK OF THE BEAST COMING SOON?