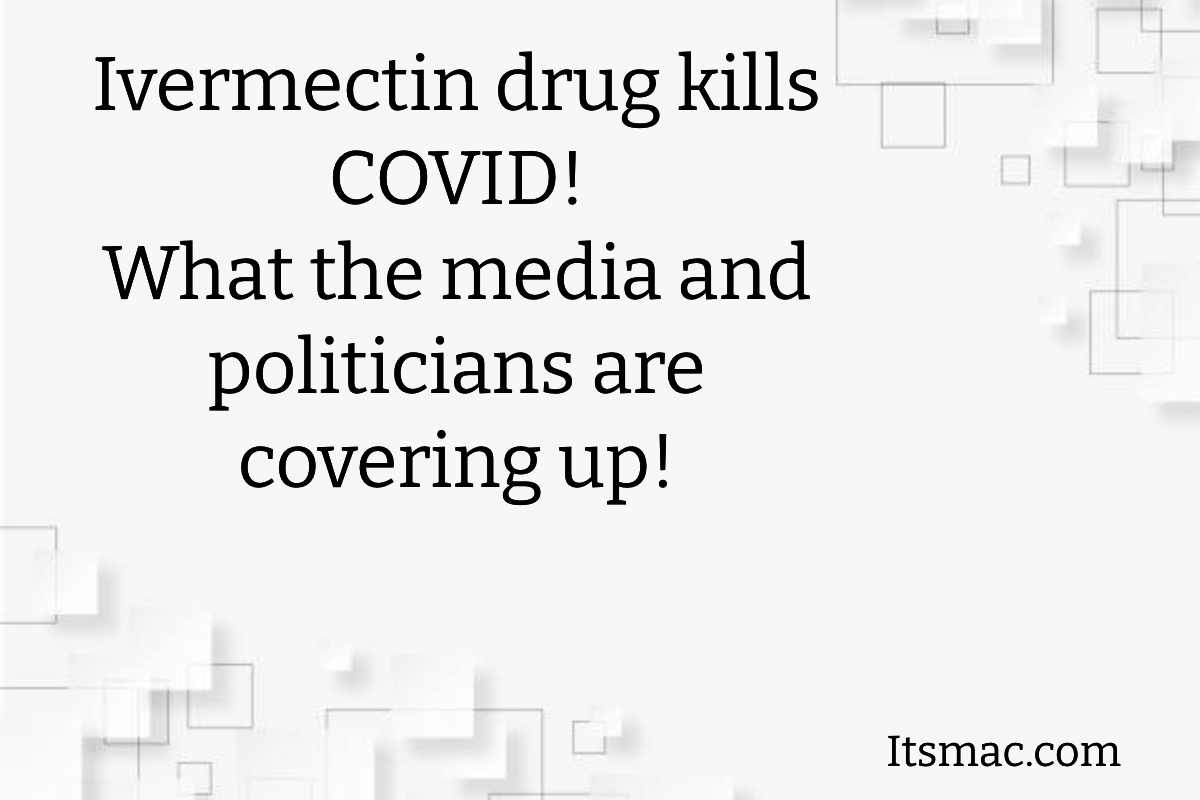 Before you read what I am about to say, I need you to watch this video.  Really, please watch it.

WOW, so ok, what is this drug Ivermectin?  I went to google and as I suspected all I found was, "IVERMECTIN IS NOT TO BE USED TO TREAT COVID."  So off to Duckduckgo...  Here is what I found. "Ivermectin (EYE-ver-MEK-tin) is an anti-parasitic medication, and a relatively new animal drug, prescribed for preventing heartworm diseases and treating other conditions like ear mites, and sarcoptic and demodectic mange in dogs."  thepetstep.com

"Ivermectin is commonly used in both dogs and cats for a variety of different diseases. It is used to treat various type of parasitic infections. Both internal and external parasites are frequently treated successfully with Ivermectin."  thesprucepets.com

"Ivermectin is the active ingredient in many heartworm prevention medications, including Heartgard Plus and Iverhart Plus."

"Ivermectin is a member of the macrocytic lactone class of parasiticides. It is commonly used as a heartworm preventative in small animals and for the treatment of certain types of external (e.g., mites) and internal parasites in many different species."  petmd.com

AN ANTI-PARASITIC DRUG?  WHAT?

Why would this drug kill the COVID, unless this Chinese manufactured virus is actually a parasite?  Then I came to the next revelation.  And OMG!

"Higher doses of ivermectin are safe for all dogs except those with the MDR1 mutation. Dosages as high as 50 times the amount used to prevent heartworms are used to treat mites on dogs (demodectic mange). Very high dosages may also be problematic for dogs infected with Heartworms, and those being treated with Comfortis."

So, a couple of things I had to investigate.  What is an MDR1 Mutation?  "The MDR1 mutation involves a deletion of four base-pairs in the genetic code of the dog. This deletion results in the protein that is coded by this gene, p-glycoprotein, being abnormally short. Each dog inherits two copies of the MDR1 gene – one copy from each parent."  vcahospitals.com

Yeah ok, so more looking. "The MDR1 (multi-drug resistance-1) gene is responsible for the production of P-glycoprotein, which is normally responsible for transporting certain drugs out of the brain. The MDR1 gene mutation is generally found in many herding breeds, some sighthound breeds and many mixed-breed dogs."  banfield.com

Hmmm, what is P-glycoprotein and where is it found? "P-gp is primarily found in epithelial cells which have the excretory roles including apical surface of epithelial cells lining the colon, small intestine, pancreatic ductules, bile ductules, kidney proximal tubules, and the adrenal gland. It is also located in the endothelial cells of the blood brain barrier (BBB)."  Here!

"P-glycoprotein (P-gp) is a plasma membrane protein which acts as a localized drug transport mechanism, actively exporting drugs out of the cell."  treatmentactiongroup.org

I also had to look up what Comfortis was...ahh, another anti-parasitic drug.  Interestingly that this drug that has been used, very effectively as an antiparasitic drug in dogs and cats is now being found to cure COVID?  And why why is this NOT being talked about on the MS media?  "Ivermectin is currently a FDA approved medicine for treatment of intestinal worms, Strongyloides stercoralis and Onchocerca volvulus. It has been established as safe for human use."

And here, right there at Drugs.com it states 2 conflicting statements:

Is Ivermectin an approved medicine by the FDA?

Ivermectin intended for animal use should not be taken by humans

Ivermectin cream 1% is approved for rosacea

Ivermectin tablets are also used off-label for a number of other conditions.

"As Ivermectin is already a FDA approved medicine we already know that it has been established as safe for human use."

And THIS folk is exactly why they---and we know who they are, want to keep the public in a state of confusion!

Now as I research that site it states that, "Ivermectin can block the cargo transporter, so the viral proteins can’t get into the nucleus. This is how the scientists believe Ivermectin works against SARS-CoV-2 virus."    Here is a little ditty from the NY Times from 2010.  Take NOTE of the discoverer of this drug--MERCK!    "Researchers have finally discovered how ivermectin, one of the most important worm-killing drugs used in both humans and animals for decades, actually works. Ivermectin, extracted from a soil fungus in the 1970s, was originally sold under names like Heartgard to deworm pets. Beginning in 1987, Merck began donating millions of doses to fight onchocerciasis, or river blindness, which is caused by microscopic worms that are spread by black fly bites and migrate into victims’ eyes."

And to add insult to injury, "Ivermectin “is an extraordinarily safe drug,” Dr. Mackenzie added. “We’ve given out 25 million doses in Tanzania and had only two minor side effects.”    So Merck already has a cure for COVID...which makes me wonder is COVID a parasite?  Is it a parasite that invades the body, like a virus, but different?

IF anyone has been looking at Australia and the recent Covid recovery rate and wondering how they are doing it...well, perhaps it is because they have been using Ivermectin!

"An Australian drug known as Ivermectin, which is already in use throughout the world to treat parasitic conditions, is showing great results in killing coronavirus in studies involving patients, according to Sky News.

"Because I'm involved in developing these in the U.S. where all the patients are, there are a number of studies that are amazingly successful. We're talking close to 100%. In fact, we haven't seen a result yet under 100%. It looks like corona is very simple to kill,"  Professor Thomas Borody, medical director of Australia's Center for Digestive Disease. "It's available as a prescription medication. You wouldn't use it alone ... but you add two other things to it such as doxycycline and zinc."

Ivermectin is already approved by the FDA and is on the World Health Organization's list of model list of essential medicines.

"We had a 14-hospital trial in Bangladesh. We got [cured] 100 out of 100. In China, they tried to reproduce it. They got 60 out of 60 cured ... So I am behind the Ivermectin, doxycycline, zinc treatment because it has very few side effects and is a real killer of coronavirus," Borody said.

Borody said the Ivermectin tablet could cost as little as $2, which is likely why drugmakers haven't promoted the drug's usage. He also suggested that have a cure for the disease easily would do away with the need for people to be hospitalized, which would make doctors less money.

"There's no huge pharmaceutical company behind it to spend millions of dollars and put people in places to treat," Borody said.  Newsmax.com

So, I firmly believe that Merck KNOWS that the drug that they have been marketing since 1987 kills  COVID but there is NO money to be made in it!  The general public may never know if COVID was a manufactured, microscopic parasite or a virus like we have been told.  Nonetheless there appears to be a drug, actually KILLS it!  We MUST STOP playing politics, stop with the fear mongering and considering all this, stop with the vaccine!

MASKS ARE FOR RIOTS! PEOPLE SHOULD WEAR MASKS WHILE RIOTING TO NOT BE IDENTIFIED AND TO KEEP THE TEAR GAS AT BAY! BE RESPONSIBLE!