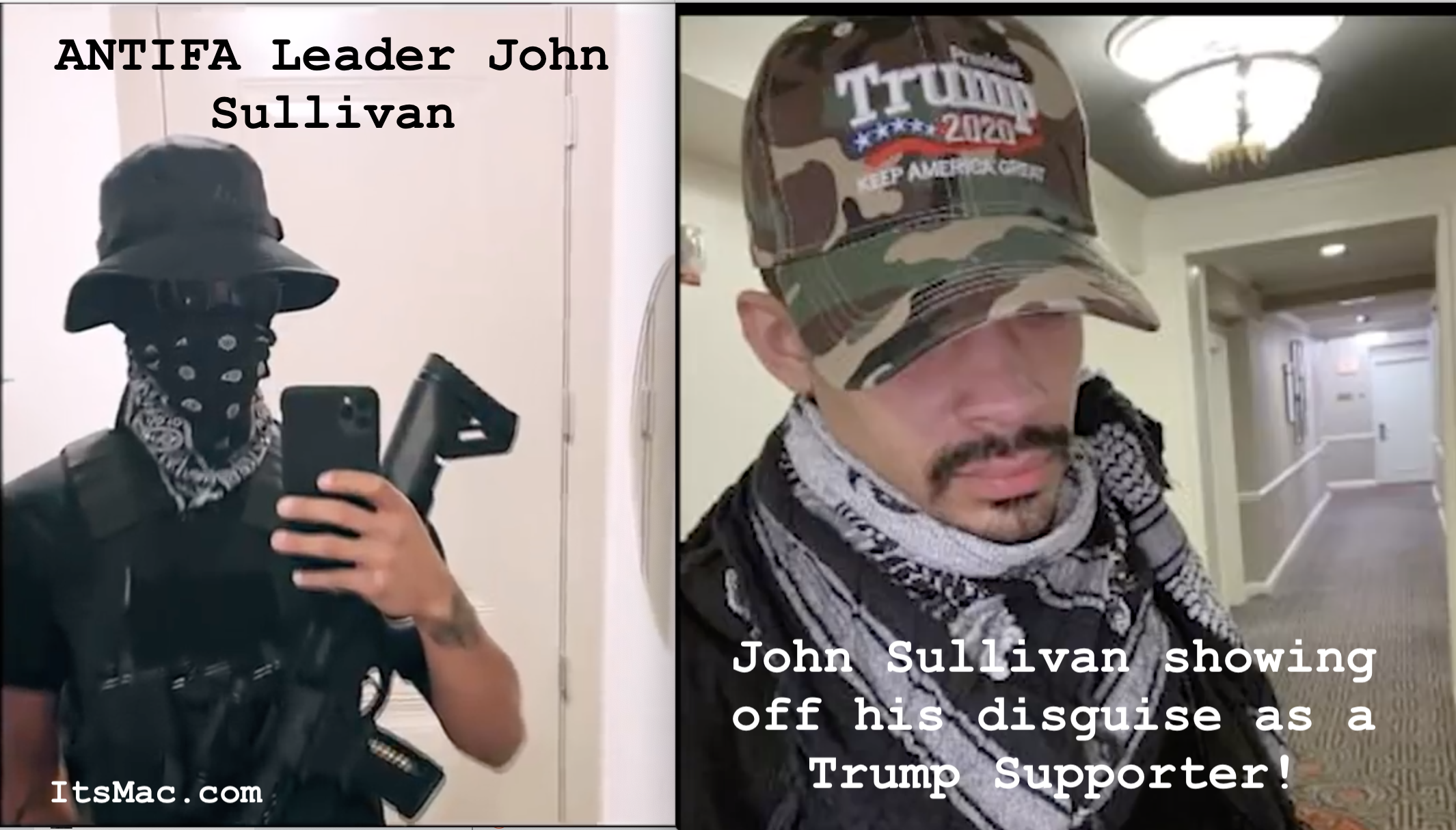 ANTIFA LEADER showing off his newly purchased Trump Hat as he gets ready to incite violence at DC Capitol while pretending to be a Trump Supporter!

setup and destroy the enemy!

The Democrats are professionals at setups as we saw with Hillary's setup of the Russian Hoax to defame Trump and then the FIRST impeachment trial to protect the Biden's and their cronies from their criminal offenses with their Ukraine quid pro quo and their money laundering with the likes of China.  And finally, we have the ELECTION STEAL! What better of a setup than to gather a whole LOT of Trump supporters who are already angry and coax them to participate in an act of rioting at the State Capitol.  Add some ANTIFA masquerading as Trump supporters as agitators, and a double agent journalist from CNN on top of it and it all becomes very clear what really happened at the Capitol building on Jan. 6th.  Guards letting "protestors" in and ANTIFA disguised as Trump supporters to egg on the real Trump supporters to do things they wouldn't imagine doing...all in a SETUP!  AND IT WORKED!  The country saw violent ANTIFA dressed as Trump supporters breaking windows and destroying property...and the stage was SET!  Jussie Smollett couldn't have done a better job at fooling the public with the Media being 100% complicit in the hit-job against Conservatives they really couldn't miss hitting their target...quite literally!

So now the spin and it has taken on a life of its own...WHITE SUPREMACIST'S INSURRECTION ON THE US CAPITOL BUILDING!  And we know that Democrats LIE!  But this took some planning and some effort not only by the Democrats but also by the media.  Take a moment to read the article below, something you won't find on the mainstream, and you will see it all...the truth  Please watch the very revealing video in this article.  Not sure how long Youtube will keep it up and you must jump through several hoops to view it.

While the FBI and the mainstream media insist there is no evidence Antifa or BLM played any role in the deadly mob that stormed the Capitol last Wednesday, Sullivan admits in the footage that he strategically wore a Trump hat and carried a “big ass camera” at the rally to guise himself as a journalist and mislead law enforcement and the media about his true motives.

Sullivan’s Insurgence USA, which describes itself as “the revolution,” hosted a “Kick These Fascists out of DC” protest on Jan. 6, around the same time a pro-Trump rally was slated near the National Mall.

At a rally prior to storming the Capitol building, Sullivan called on a crowd of leftist protesters to “f*cking rip Trump” out of the White House.

ANTIFA Leader, John Sullivan at the scheduled meeting point, there ONLY to incite a riot--a "REVOLUTION" and to blame Trump Supporters!  WHY IS THIS NOT being shown to the public by the mainstream media?  THIS is the evil that attacked the Capitol!  And THIS is the very nefarious Presidential administration we now have.

Another very interesting item that I noticed as I watched the video posted by The Gateway Pundit is that we have been told that Air Force veteran, Ashli Babbitt  who was shot and killed while she was trying to get through a smashed-out window, was allegedly killed by a member of the DC Capitol police.  Now I watched the video over and over again from the moment some guy shouts "There's a gun" to the moment the shooter darts back into a room.  Now if you get a chance to see this up close video before it is taken down (which it may already be gone) you will notice a hand, not a gloved hand, but one with what appears to have dark skin, and this person has on a colorful bracelet, a dress shirt with cufflinks and a dark suit.  This person was most definitely NOT a Capitol Hill Police officer or any other type of law enforcement.  The loose bracelet was the dead giveaway.  This was most likely a Congressman, if I were to make a logical assumption.  But why were we told that this shooter was a Capitol police officer?  The video is below and has many caveats before you can view it.

THE SET UP IS COMPLETE

Will it ever end?  Will the lies and the scams, the shams and the hoaxes ever end?  Will the Liberals, the misguided people of this country figure any of this out?  Are they really so brainwashed that they believe it all...believe everything the Democrats, the mainstream media and the social media giants feed them?

THE BRANCH COVIDIANS! THE COVID CULT HAS TAKEN OVER!

THE US GOVERNMENT PUSHING THE “REAL ID” WITH A NEW DEADLINE. BUT WHAT ABOUT RACISM? JIM CROW 2.0?