I am sick and tired of the radical left and their cronies the Main Stream media spinning what happened at the Us Capitol on Jan. 6th.  Their reports about the, "INSURRECTION" that killed 5 people is simple disgusting, disingenuous and a down right LIE! But the more they push their "domestic terrorist" agenda the faster that train rolls down the tracks, railroading Conservatives, especially Trump supporters.

So let's tell the truth here.  FIVE people were NOT "killed" by domestic terrorists on Jan. 6th at the Capitol building and no matter how often the press or the Liberals state that doesn't make it true!  I think we all know that ANTIFA was extremely active on that day and they are well known as being anarchists, cop haters and have no regard for authority...this is not a secret and it is also no secret that they were in full force with a divisive plan set forth and also incited their members at a gathering of Trump supporters on that particular day.  If you read what I have written about this, you know.  If this is your first time reading my thoughts, then look at the last 2 pieces I have written on this subject. I don't want to belabor this fact to my loyal readers.

TIME TO CALL OUT THE DEMOCRAT AND THE LYING MEDIA!

So we know 100% there were Trump supporters who got caught in the ANTIFA mob mentality and we know for 100% that ANTIFA planned in advance and coordinated to dress as Trump supporters.  The media knows this is true, the police know this is true the FBI and the CIA know this to be true!  But now we see and entire narrative spun from the work of ANTIFA...it is almost like the left and ANTIFA are working together.  RIGHT!  I have to wonder how much dirt President Trump has on these people to make them hate him so much and not only try to utterly destroy Trump but to obliterate his supporters by labeling them "domestic terrorists."  And no matter if you are black, brown or white, also a White Supremacist!  Yes, all of this if you supported President Trump and know for a fact that this election was STOLEN!

WHO DIED AT THE CAPITOL?

The most talked about person who lost their life at the Capitol was Air Force veteran and patriotic Trump supporter Ashli Babbitt.  I am now convinced that a radical leftist made a "my life" account for her and called her a crisis actor...but that is a different story.  Babbitt was caught up in the mob mentality, unknowingly, surrounded by ANTIFA who were smashing windows. One of the videos taken from just a couple of feet away was from an ANTIFA Organizer, who goes by the name of  Jayden X, whose real name is John Sullivan from Utah clearly shows the ANTIFA agitators right there.  As the unarmed young woman attempted to make her way through an interior window, draped in an American Flag, with Capitol police standing behind her not  even attempting to restrain her she was shot by, Capitol Police Special Agent David Bailey.  There is some evidence to suggest that David Bailey is a BLM member. Here is a screenshot.  This could be a doctored image...I don't know.  He could have been suffering from PTSD after being wounded in the Congressional shooting where some crazed radical Leftist shot up some Congressmen including Steve Scalise who was critically wounded...I don't know. 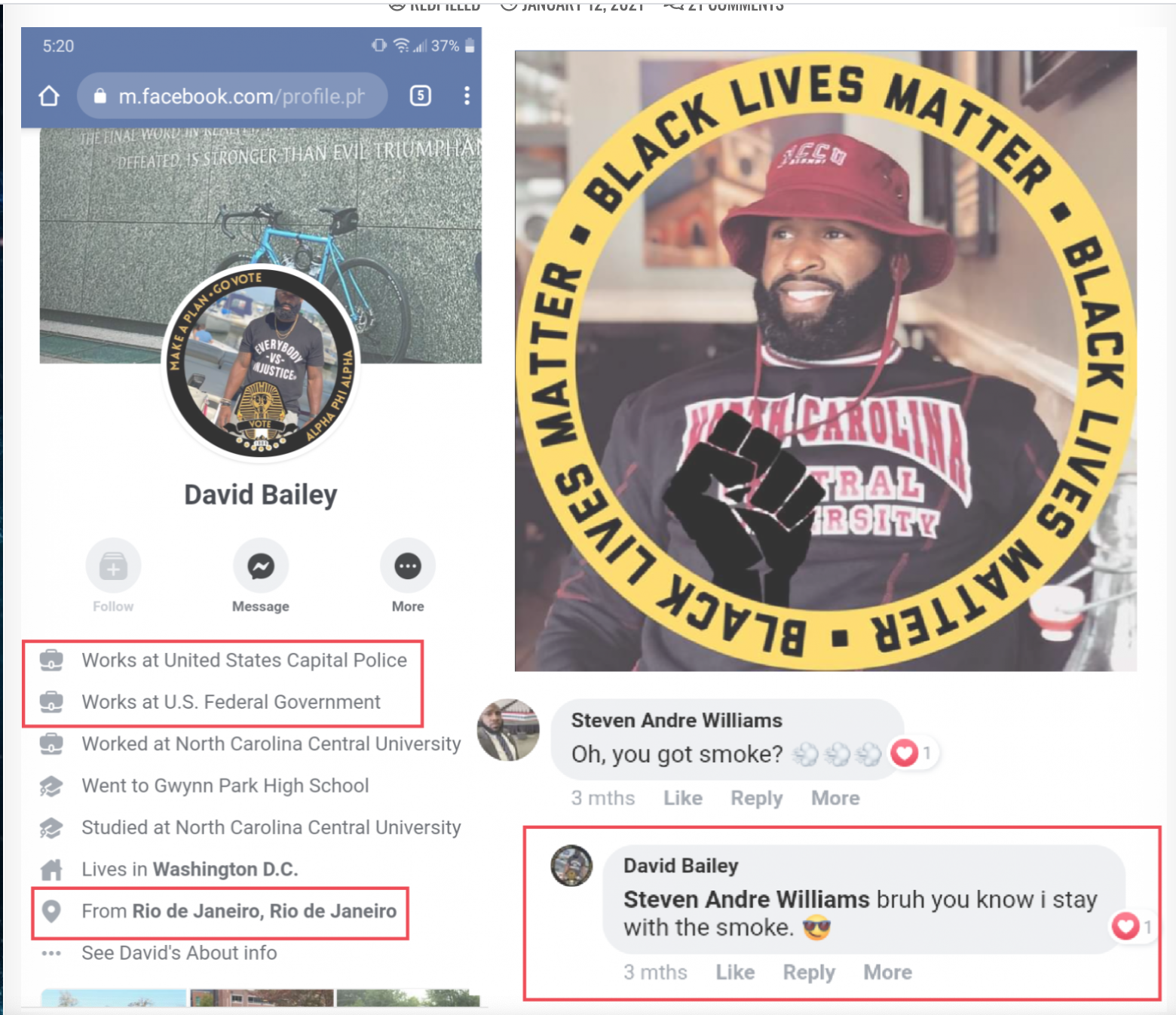 Is this the same David Bailey that shot an unarmed Trump Supporter on Jan. 6th at the US Capitol building?

Ok, so one unarmed, white woman is shot dead by a DC Special Police officer.  She was a Trump supporter caught up in the frenzied agitation of ANTIFA.  She didn't break the window she just tried to go through it.  Now, who else died that day?  Kevin Greeson, 55, of Athens, Alabama who suffered from high blood pressure died of a heart attack on the grounds of the capitol.  Benjamin Philips, 50, of Ringtown, Pennsylvania, died of a stroke on the grounds of the Capitol.  Rosanne Boyland, 34, of Kennesaw, Georgia, was caught up in a crowd and was crushed at the Capitol doors when the police forced the crowd back.  Since Ms. Boyland was caught up in the throng of people, by her own volition her unfortunate death could not and should not be considered a "killing."  This is a list of 4 Trump supporters that unfortunately died at the US Capitol building on Jan. 6th.  One was an unarmed woman shot by police, 2 were heart related and one was crushed by the crowd she was with.  With these 4, the only pure act of premeditated violence was the shooting of an unarmed woman.  But there is one more reported death that day and that was officer Brian Sicknick, a loyal Trump Supporter!  It has been wildly reported that Sicknick was struck in the head by a fire extinguisher.  And, if that were true, it would be very obvious who would have done something like that...someone who hates cops, like ANTIFA!  Trump supporters support cops and protest against the BLM and the ANTIFA groups that riot to defund the police.  We don't know exactly what caused officer Sicknick's death, yet, but several sources are claiming that Sicknick suffered a stroke during the riots and later that evening was transported to the hospital where he was put on life support and died.  The truth will soon come out.

There you have it.  5 people dead...all 5 Trump supporters, and if you think for one minute that the media or the liberal left cares at all about the lives of Trump supporters, you need to have your brain examined.  They do care, however, about this delightfully, delicious agenda that they can push on the American people USING the deaths of these 5 people.  If the liberals out there actually knew that it was 5 Trump supporters who died at the Capitol they would be dancing in the streets.

Trump supporters have been on the sharp end of the knife since Trump was elected and even before.  ANTIFA, BLM and the Democrats don't hide their hate for conservatives.  And the whole, White Supremacy thing?  Yeah, that is nothing other than a coverup for the real racists and they are not white! It has gotten so obvious that White Supremest crimes need to be made up--Smollett, Nick Sandman...The Detroit scam, and this one, here, and here, and again, and this, this, another, and more...  Over the years we have heard members of BLM chanting death to whites and cops, we listened to Maxine Waters inciting violence against Trump supporters, even our new Vice President, Kamala Harris, on national tv, said that rioters, "shouldn't stop."  AOC told her cronies, 45,000 of them  "Let this moment radicalize you," in a social media video, Sept. 19th, 2020.

And this is my favorite video of all time.  This is a preschool teacher.  So while the left pushes the hatred for Trump and his supporters, the real hate, the real violence and the REAL supremacy comes from 3 groups, BLM and ANTIFA  and the Democrat party.  And if you are a conservative or God forbid, a Trump supporter, they hate you!