Gosh, I am so irritated when I hear a news outlets say, "the deadly insurrection at the Capitol..."  Let's just start dealing with facts and rid ourselves from the Rules of Radicals.  First of all, ONE person was purposefully killed on Jan. 6th. at the Capitol. ONE PERSON; an unarmed,  white female, military veteran was shot in neck at point blank range by a Black, Capitol police officer!  ONE person was crushed to death as a huge crowd of people at the Capitol doors were pushed back by police and 3 others, including a police officer died of medical conditions.   These are the plain and simple facts.  But what about the riots that we as a nation have endured since the death of George Floyd?  How DEADLY was our summer of 2020?

"Victims of the violence included a police captain, a former football player, a federal officer, a photographer, business owners, teens, and others. A majority of their deaths were caused by shootings, but a select few were caused by being hit or dragged by cars. One news report documented that a body was found burned to death in the remains of a Minneapolis pawn shop set on fire by rioters."

And talk about "insurrection" what would you call a group of violent thugs taking over more than 6 city blocks of Seattle?  Is that not considered an insurrection?  What what did the local Seattle government do about it?  NOTHING.  The Mayor of Seattle, Jenny Durkan, called this hostile takeover of part of her city a, "summer of love" as rapes, murder, arson, robbery, federal property being destroyed, and other violent crimes were taking place in what was called the Capitol Hill Autonomous Zone, CHAZ for short.

Why wasn't the the Media calling this "insurrection" what it was?  Nope they just couldn't, it was a "SUMMER OF LOVE!" The Mayor said so! 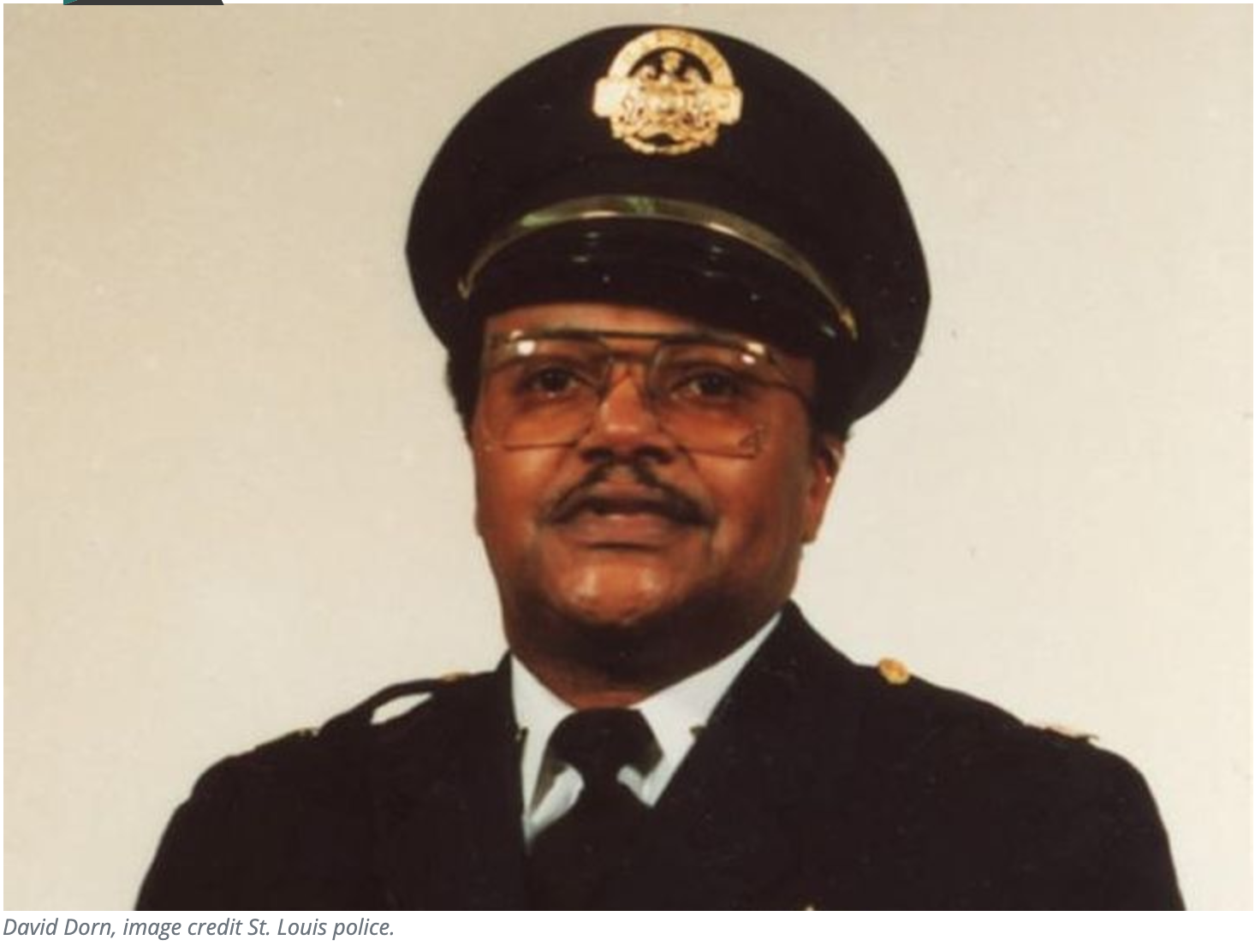 Almost every protest we endured this summer started out as peaceful until the agitators came out to cause the real violence, and once that happened, there was zero denying that it was no longer peaceful...the building on fire behind the CNN newscaster was dead giveaway!  Do I think that some peaceful protestors got caught up in the mob mentality of looting, destroying property including federal property?  Yes, I sure do but I also know if those Leftist, Marxist agitators had not been around, the protest may have continued to be peaceful.  And many of these agitators were certainly not locals of the area, but in the case of the murder of David Dorn, retired St. Louis cop, his killer was not only a local boy but murdered one of his own Black Lives as he was robbing Dorn's business.

Chris Beaty a 38 yr. old, well respected businessman in Indianapolis was violently murdered as he attempted to save 2 women who were being robbed during the riots.  HERE are the names of 20 victims of our summer of love riots, and a little bit of their life story--because their lives mattered. And all throughout the summer, as the violence and destruction and murders continued, not a single Democrat politician dared to condemn these Far-Left Extremists!  Nope, actually the opposite occurred. 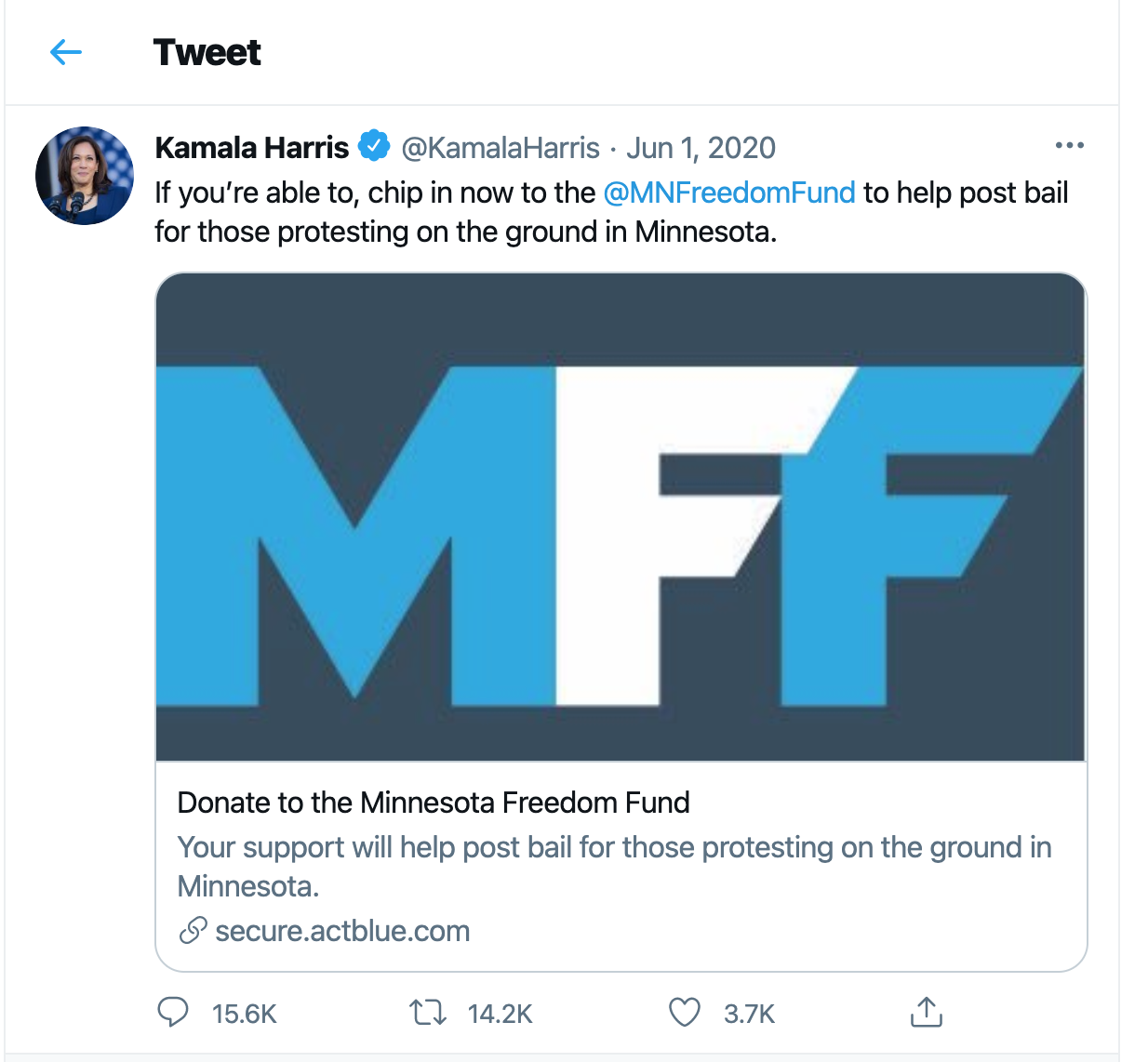 Our very own Vice President of the United States begs for bail money to release violent rioters jailed in Minnesota.

EVERYONE BEWARE?  WHAT DOES THAT MEAN?  SOUNDS LIKE A CALL TO INSURRECTION TO ME!  So, who is "everyone" and doesn't this smack of a threat?  A domestic threat towards the American people?  If someone said that to me (Beware), it would agitate me to be very afraid and on guard of those who are ardent followers of Kamala Harris.  It does appear as if she is the leader of this, "movement" and she is telling us to BEWARE of what is to come from these radical domestic terrorists that have gone UNCHECKED for years now.  She makes her involvement Crystal clear when she says, "They’re not going to let up and they should not and we should not.”  She is included in the "WE." 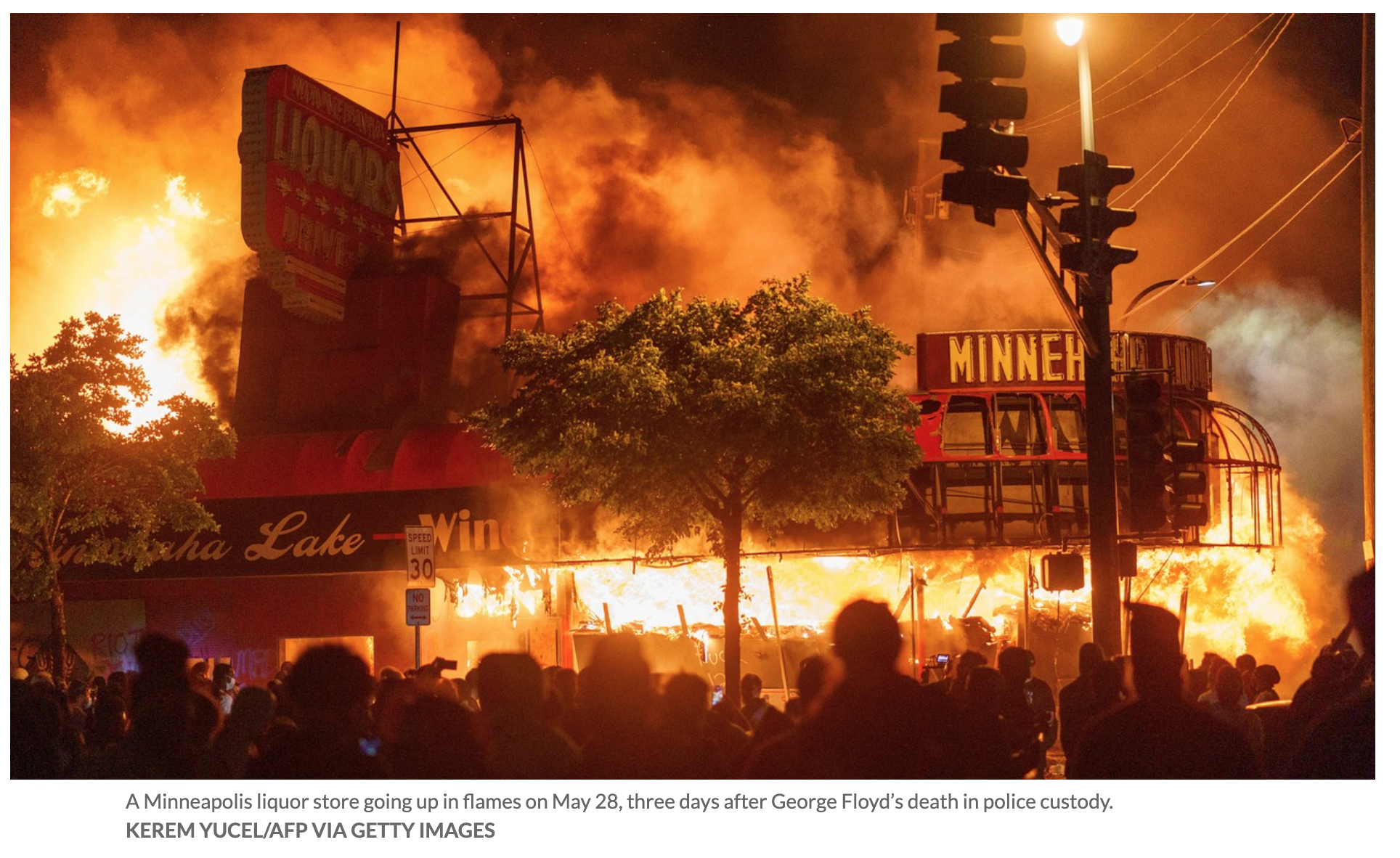 Perhaps someone from the MAINSTREAM Media, and that includes FOX, will read this and understand that not all Americans are buying the bullChit they are selling.  When 2 people are killed, one shot by police and one crushed by a crowd it is called a "deadly insurrection" by the media mob. But when over 30 people are killed over the summer during violent riots, those actions are praised and the criminals are called hero's for making their voices heard.  Even Chris Cuomo, CNN news reporter and the brother of the Governor of NY, Andrew Cuomo, indigently stated on a television broadcast;

“Now too many see the protests as the problem. No, the problem is what forced your fellow citizens to take to the streets: persistent, and poisonous inequities and injustice...Please, show me where it says that protesters are supposed to be polite and peaceful. Because I can show you that outraged citizens are what made the country what she is and led to any major milestone...the only people required to be peaceful, to deescalate, to remain calm, are the police"~~Chris Cuomo

"The problem is what forced your fellow citizens to take to the streets: persistent, and poisonous inequities and injustice."

Yes Chris, this is exactly why tens of thousands of conservatives went to the Capitol building on Jan. 6th, 2021!  You see, justice would have led to a forensic investigation of the alleged voter fraud in the Presidential election that over 75 million Republicans feel happened.  Moreover, according to a November 17-18 Rasmussen poll, "Among Democrats, 30% say it’s “likely” that fraud swayed the outcome, while a whopping 20 percent believe it is “very likely.”  The "Poisonous Inequities" that have been biting at the heels of conservatives for well over 4 years, actually going back to the Obama Administration have been "persistent" and the hypocritical "injustice" our President has suffered is what caused all of those people to protest at the Capitol building.  It is clear that groups like ANTIFA, BML and the Boogaloo Boys, who all share the same, anti-government, anti-police ideologies saw this gathering as their opportunity to instigate violence which is their usual MO.  And just as ALL the violent, destructive riots we have suffered all summer, had these instigators not been present, that peaceful protest that President Trump called for, would have stayed peaceful.

THE WHO TELLS PEOPLE TO MAKE THEIR OWN 3-LAYER MASK USING NON-WOVEN, NON-ABSORBENT & NON-POROUS MATERIAL!