Image thanks to Tima Miroshnichenko

On Dec. 13th, 2020, we were informed that Russian Hackers busted into our Federal Data bases in an aggressive act of foreign cyber Espionage. Why isn't there ANY current information regarding the largest data hack in world history? I mean, come on, this was so huge and involved data breaches of our most sensitive Federal agencies as well as hundreds if not thousands of companies and corporations worldwide! We caught a few blips about this last December but since then, NOTHING!   Moreover, because this was not widely reported by the mainstream, alphabet media, most people have no idea this cyberattack ever happened, let alone understanding that it was the most  widespread and dangerous case of cyber-espionage this world has ever encountered, especially our country.  Seriously a big deal!  Initially it was reported by the White House that the US Treasury Department, Commerce Dept., Communications & Information Dept. and the Department of Transportation but it was soon discovered that hundreds of data breeches were reported in the US and globally.

The most terrifying thing about this alleged Russian hack is that they had access to all these systems for months and no one is quite sure how many months, but absolutely well before the 2020 elections.  Hmmmm  Microsoft and their cloud was hit, NATO was breeched, the Uk Government as well as the European Parliament.  But what was NOT reported on the nightly news was that our Nuclear Weapons Agency was part of that cyber espionage attack!  YES they had access to the internal workings of our NUKES!  FOR MONTHS! 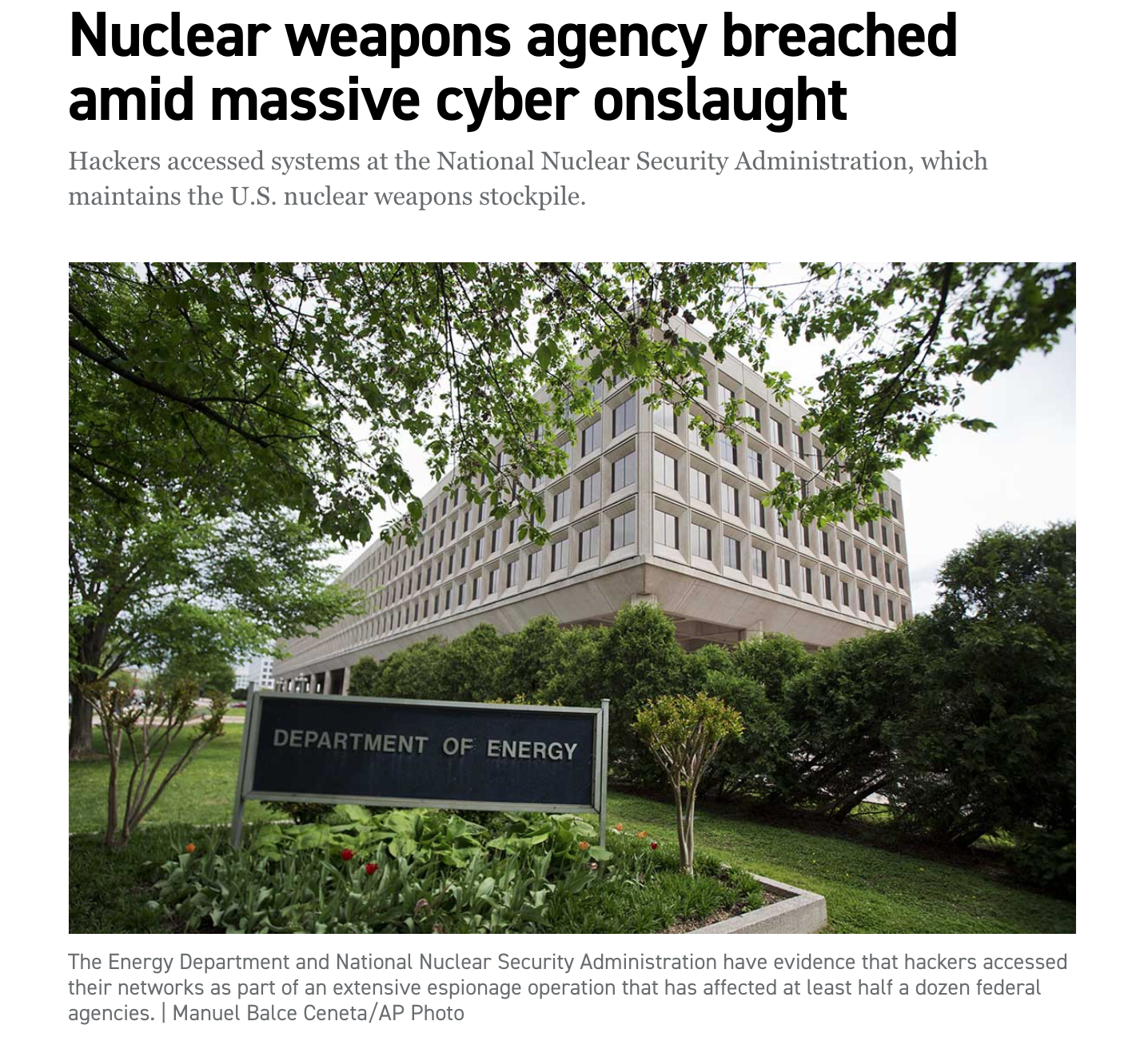 Now, what would Russia have to gain by hacking into our Government servers and other global servers around the world? Perhaps to secure a Biden win? Maybe to make sure their Russian Pipeline went in as scheduled? Or to have access to all of our sensitive data...remember the NUKES?  Let's not forget that the Democrats desperately tried to convince us that the Russians interfered with our 2016 elections for a Trump win and they forced our country to endure a 2.5 yr. witch-hunt, when they KNEW full well  it was all contrived by Hillary Clinton, the FBI, the CIA, and the DOJ, with the help of Clinton seeking out and paying for a FAKE Russian dossier to smear Trump. It wasn't Trump working with the Russians it was the Obama administration, Hillary Clinton and our DOJ...and not just Hillary Clinton it was also the Biden family.  Yeah, remember Hunter Biden's Laptop?  Hunter received a $3.5 million wire transfer from Elena Baturina, the richest woman in Russia and the widow of Yury Luzhkov, the former mayor of Moscow.  Yes, let's not forget that.

So, recently we have seen Russian hackers busting into our gas pipes and our meat companies, but really NOTHING COMPARES to the fact that our Government was hacked and NO one is talking about it!  Nothing since Dec. 2020!  How in the world can this be?  They were invading  sensitive and classified data for months and no one thinks to connect the dots to the 2020 elections?  And the simple fact that these hackers went undetected for God knows how long, but absofriggenlutely way before the Nov. 2020 elections.  Why is no one making the connecting to this and an obviously rigged election?  Come on man, hacking the Dominion machines would have been a piece of cake!  Uh hum, they hacked MICROSOFT for Goodness sakes...A computer savvy 11 yr. old could hack a Dominion voting machine.

Do you think that the fact that no one is following up on the biggest Cyber attack on the world or the fact that so few people know about this extremely serious cyber espionage crime had anything to do with the outcome of the 2020 elections?  I SURE AS HECK DO! Ask any of your friends what happened in the world of Cyberville, December 2020 and you will get a blank stare.  Why?  I even asked my super geek 22 year old twins and they had no answer.  Unbelievable!  So the next time I tell someone that the 2020 elections were rigged and they call me a "threat to our democracy" and a "conspiracy theorist" I am going to ask them to tell me everything they know about the biggest cyber lurk in history!  Just think, Top Secret information including our nuclear defense infrastructure that these hackers know about should deeply concern everyone...but so few even know this ever happened. Conspiracy?  Nope!

DEMOCRATS USE IMPEACHMENT TO COVER THEIR OWN CRIMES! FIRST IT WAS BIDEN & NOW BIDEN.

A TALE OF TWO CITIES–COEUR D’ALENE, ID VS SEATTLE WA.