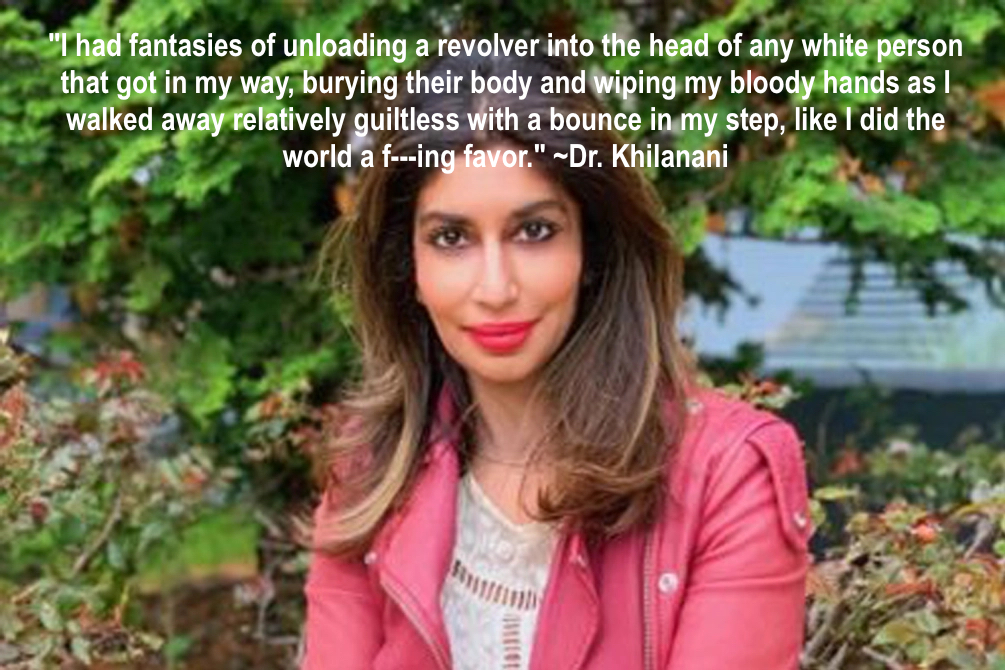 Dr. Khilanani fantasizes about murdering any white person that gets in her way.

Just imagine being a White, Psychiatrist, invited to Yale's school of medicine to give a lecture about racism and telling your audience, which includes Yale medical students who can use this lecture as credit, that you fantasize about unloading a revolver into the heads of Black people!  Imagine if that same White, Psychiatrist claimed that the Black people involved in the violent riots over the summer of 2020 were F'ing crazy and made your blood boil. And then what if you pointed out the fact that it really isn't White people who are racist but Black people...oh what a problem that would be and how quickly that White, psychiatrist would lose their medical license, reported as a racist all over the mainstream media, and be ostracized and canceled from society.

But flip the narrative to a woman of Indian descent that is a psychiatrist addressing students and faculty at Yale's "Child Study Center--Ground Rounds" event at the prestigious college's School of Medicine's Department of Child Study Center.  The image below is how this event was promoted. 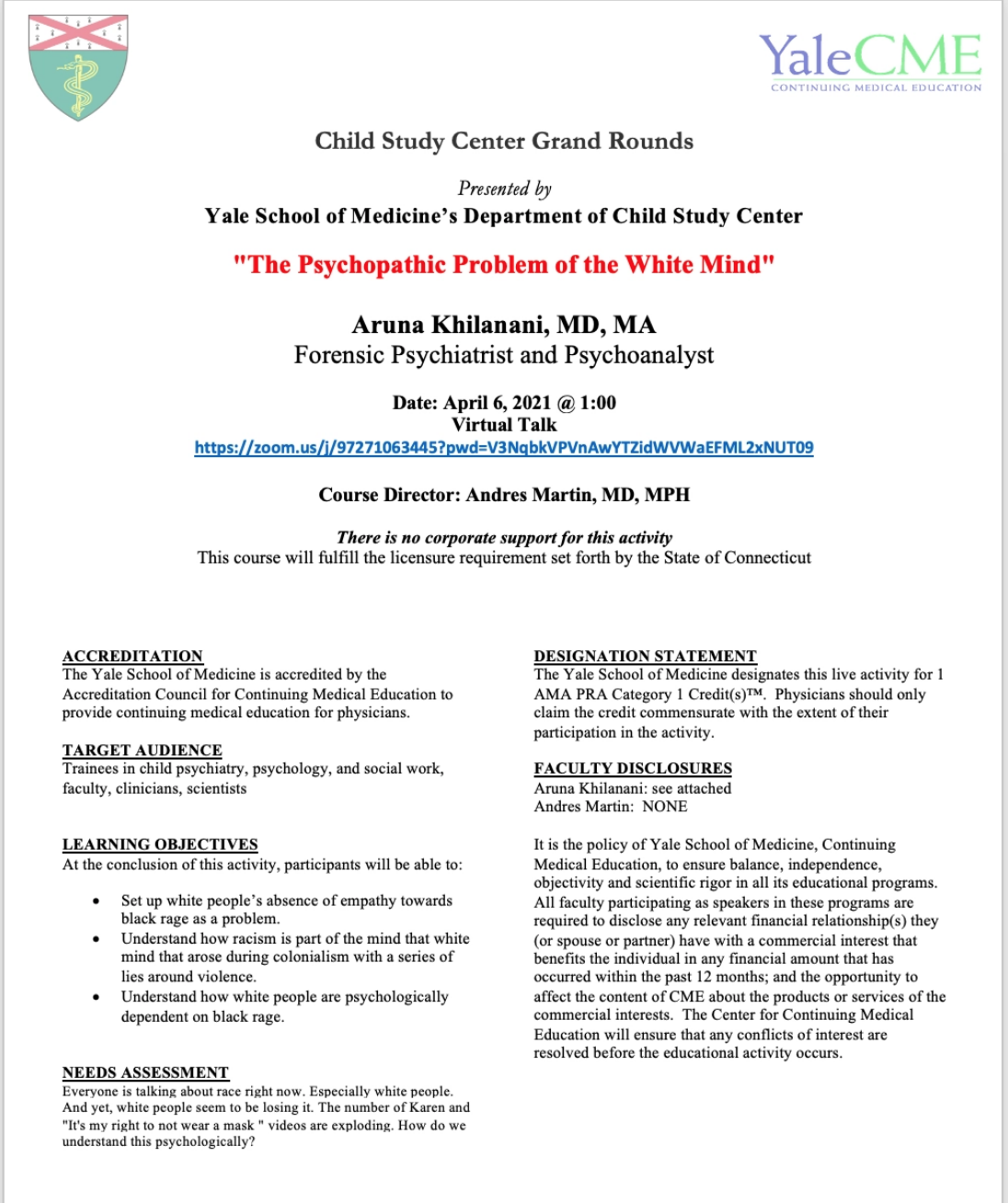 So what exactly did Dr. Khilanani say to these impressionable Medical students at Yale's Child Study Center?  It couldn't have been all that bad considering that on her website she claims,

"I am a psychiatrist who is interested in people who feel they are outsiders for various reasons. I am also a psychoanalyst and do this supposedly archaic practice of psychoanalysis. I have a private practice in Morningside Heights aka Harlem --the hood of renaissance.

The meetpoint is a humble sanctuary for ALL kinds of people. Whoever you are, and wherever you come from, our world is better because of you. Conservative, Liberal, Old, Young, Blue, Black, CIS, Trans, Asian, Fat, Skinny, rural, urban, B-baller, international, ex-pat, Rapper, Queer, White, Muslim, Biker, Rocker , Lax player, Atheist, Trump Supporter, Darwinist, Trump Hater..

Does it matter? Has anyone ever told you, that you can’t because of who you are? You feel on the outside, at the edges, not in and not out..."

Ok, well she sounds like a nice lady, a balance psychiatrist who seems to truly cares about people...all people no matter their skin color.  Right?   Oh but wait, this is just a narrative, a lie.  In truth, "white people" make her "blood boil."  Hmm

It seems pretty clear that this well educated, successful psychiatrist has been hiding her deep, dark secret---her racism and hatred for White people and she couldn't have made that sentiment more clear than she did on April 6th in a Zoom Lecture.  So let's just put her website claims to the test.

Whoever you are, and wherever you come from, our world is better because of you.:

So why am I writing this?  Well except for the obvious, to point out that the double standard and hypocrisy on the Left is blatant and audacious, but to also show the censorship I encountered when I posted my opinion of Dr. Khilanani's statements on my Facebook page.  I was banned for 30 days for quoting what Dr. Khilanani said, except I replaced when she said, "white" I wrote black.  I prefaced my post, asking what would happen to a White person, especially a Doctor, a psychiatrist, if they had said those same words about Black people.   So either Facebook censored my post or I have a MOLE in my friends list who reported my post as Hate Speech.  Either way, the truth is the truth, this woman is a racist and the seeds of hatred and violence she planted into the heads of these college students are criminal! 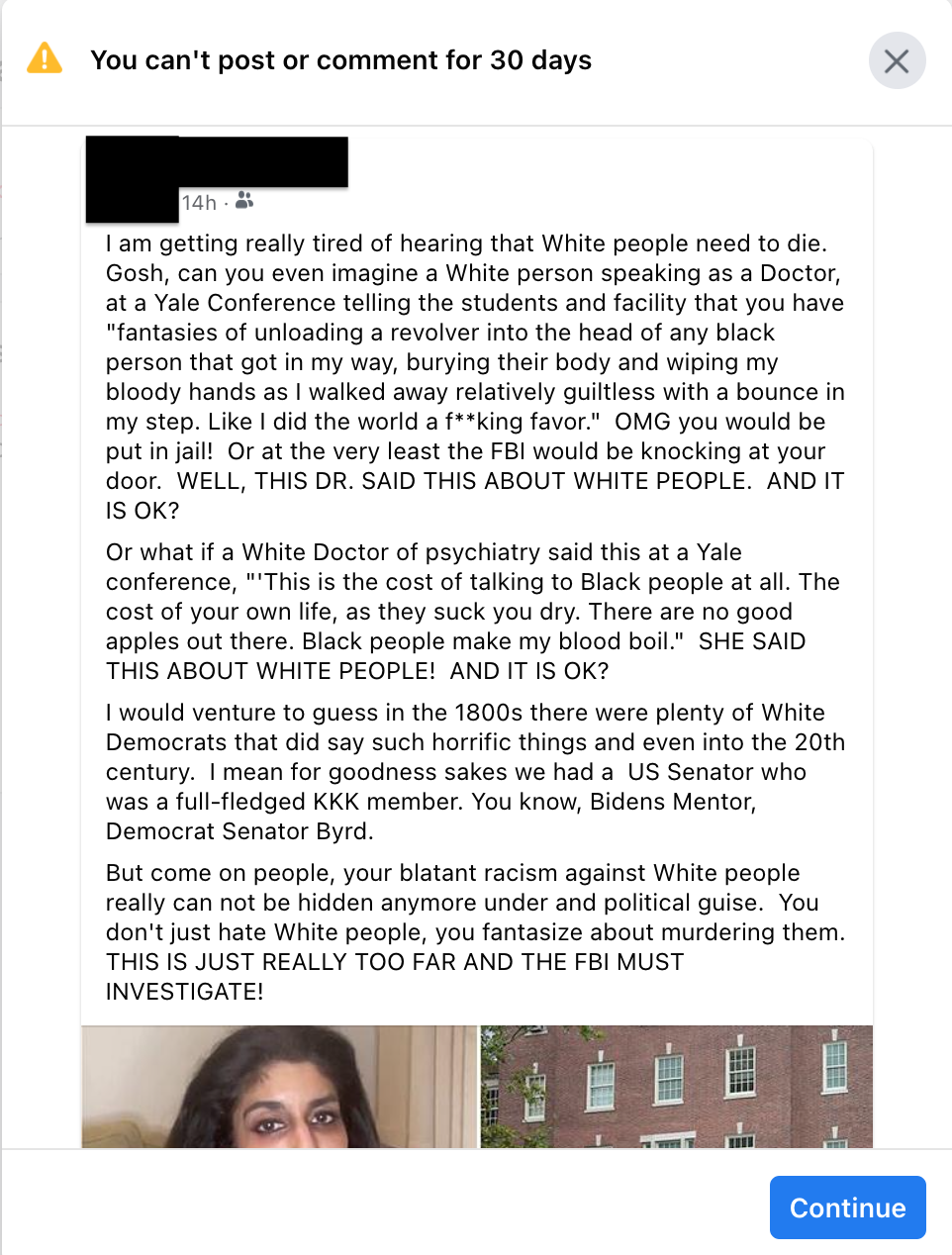 No ONE could say those words against Black people in this day and age and not have serious repercussion.  They would be literally cancelled right out of existence right after they were completely eviscerated by the Liberal Left.  THIS IS A FACT!  Most likely the FBI would be investigating this as, Domestic terrorist speech from a White Supremacist...remember just this June, Biden told us that "Terrorism from White supremacy is the most lethal threat to the homeland today."  What a total load of crap and a spin on reality!  This White Supremacy notion went out with the death of the Democrat created KKK and birth of the Black Panthers, the rise of the anti-semitic, white hating, Nation of Islam lead by Louis Farrakhan and the domestic terrorist, Marxist group, Black Lives Matter.  Sorry, you just can't resurrect white supremacists no matter how many plants you put at the Capitol or pay to be at Charlottesville!

These are the racists, these are the ones who hate white people so much that they fantasize about murdering them with zero guilt.  These are the people that are the most LETHAL THREAT TO OUR NATION!  And the Woke culture of social media giants like Facebook, the leftist corporate elites like Amazon, Coke and Target as well as the complicit alphabet media and a puppet of a president in Biden can all get away with their blatant racism, and give someone like Dr. Khilanani kudo's for inciting violence, including murder, a free pass.

I'll leave you with the expletive words of a Seattle Preschool teacher and you tell me who the racist is.  Imagine white people saying this to blacks...imagine white people saying this to minorities who moved into their neighborhoods and took them over with gangs, murders and crime.  Remember, Detroit used to be a thriving, beautiful, safe city.  Is that racist to say?  Or is it the truth!  Someone needs to start telling the truth and stop this fake narrative!