Being nominated for the Nobel Peace Prize is not something to snub your nose at or even take lightly, especially when it is for a medical achievement.   And quite honestly the medical nomination is one of the most lauded honors a scientist or doctor could have bestowed upon them.  The nomination criteria is strict and not just anyone can be nominated in this category, the achievement and contribution to medicine must be stellar. According to the Nobel Prize Organization, "The Nobel Committee sends confidential invitation letters to persons who are competent and qualified to nominate candidates for the Nobel Prize in Physiology or Medicine."

Which brings me to Dr. Vladimir Zelenko who discovered a combination of drugs, when used in the early stages of the COVID virus reduces the death rate by 85%, these are hydroxychloroquine, zinc and azithromycin.  Dr. Zelenko has been nominated for the Nobel Peace Prize for his contribution and dedication to saving lives with this triad which has been coined "The Zelenko Protocol"

Now one would assume that everyone would know this mans name...right?  After all, someone who the Nobel committee felt was competent and qualified to make this nomination, certainly wouldn't nominate someone who wasn't worthy of this nomination...right?  Especially considering it is regarding THE COVID and saving lives with common, FDA approved, CHEAP, repurposed drugs. We're NOT talking about the Idiot Category that nominated Obama, this is the MEDICAL nomination where people actually have something productive, lifesaving, humanitarian they have achieved or the good of the world.

Well, there is a reason that so few know this doctors name...he was silenced, criticized, banned, humiliated and ostracized from many in the medical community for discovering not only an early cure for COVID but also for explaining the properties of HDQ and an over the counter mineral, zinc to stave off the virus. He was even shunned from his own Jewish community by the Pharisees in charge!   Who would have done this to him?  The same people who are now pushing a vaccine passport, mandatory vaccines!  Those who are ensured to make HUGE profits.

FROM THE VERY BEGINNING

Dr. Zelenko began sounding the alarm early on that this virus could be very bad, especially for the elderly.  As an orthodox Jew, living and practicing in the Jewish community of Kiryas Joel, a small town north of New York City he was accused of, WAIT FOR IT...SPREADING DISINFORMATION ABOUT THE COVID VIRUS!   Does your mind go immediately to the right-wing "conspiracy theorists" who called this a planned virus? Who claimed it wasn't natural but a lab escapee? Or someone who shows data stating that deaths are being counted as "dying with COVID" instead of "dying of COVID" padding the death toll?  NOPE, this doctor was being accused, by his own community for claiming that this virus was going to infect 90% of his community.  Dr. Zelenko could have quite easily been a poster child for those on the Left, UNTIL he made this trifecta of drugs discovery and...WAIT FOR IT...contacted President Trump about the success he was seeing, saving hundreds of lives!  GAME OVER GOOD DOCTOR! 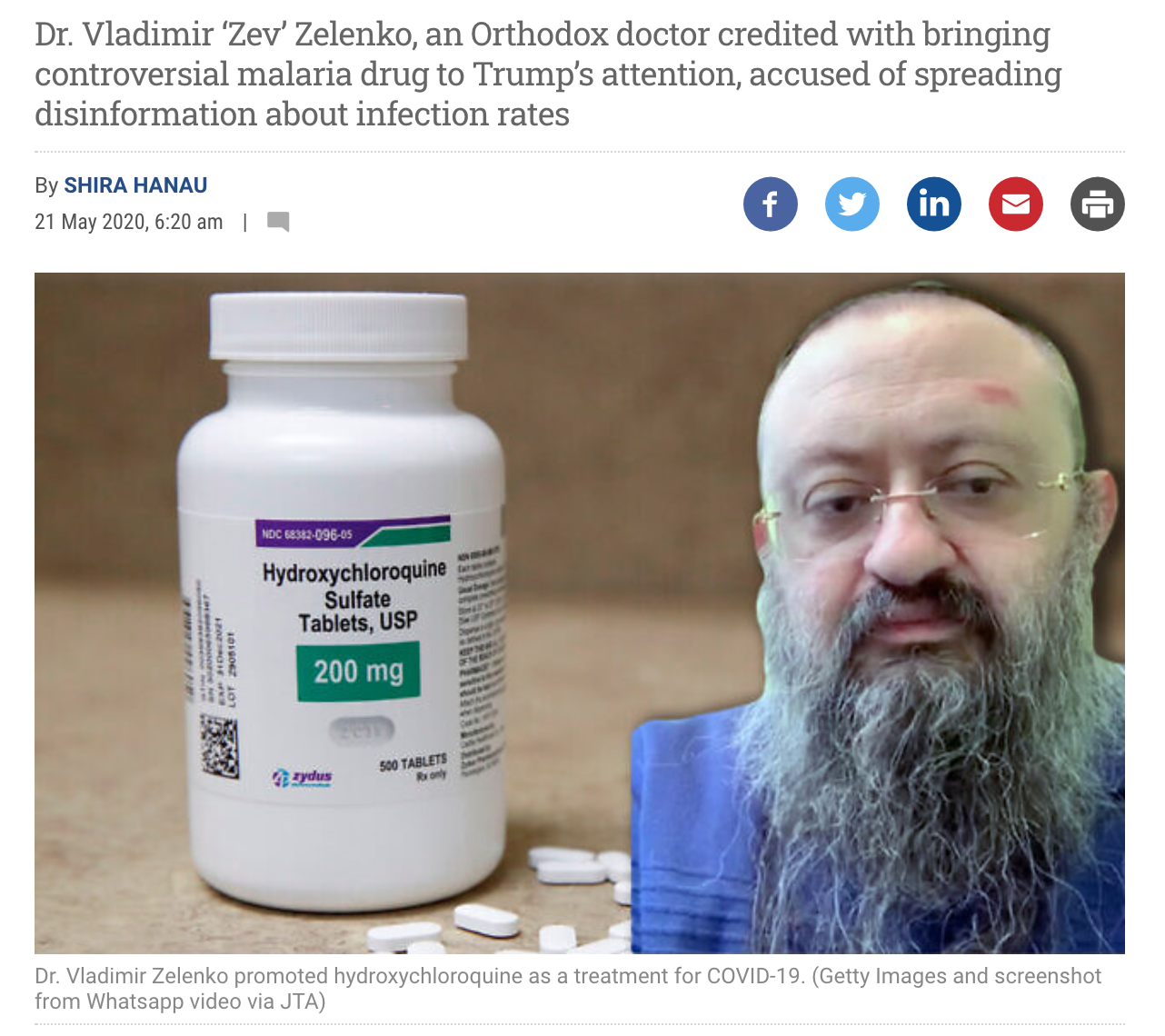 In May of 2020, over a year ago, Dr. Zelenko was accused of claiming the COVID virus was going to infect a LOT of people. HE WAS RIGHT!

Irony upon irony!  A doctor, a Jewish doctor sounding an alarm, being the right hand for the Left during the first few months of this pandemic.  Urging for mask wearing, public closures, warnings to his beloved community that the plague was here!  He was saying the complete opposite of what Nancy Pelosi was telling the country with her, "y'all come on out to San Francisco's China town..nothing to worry about here!"  This Dr. was sounding an alarm, BUT he was also trying to tell the world that he had found a cure!  Oh goodness, what good is a plandemic with an inexpensive cure.  Why repurpose tried and true--"SAFE AND EFFECTIVE" drugs when there will be BILLIONS to be made off a vaccine?  Come on man, this is like, ummmm, umm, like the man in the moon or aliens, I mean, it's like...YOU KNOW THE THING!

I strongly encourage you to listen to what this doctor, this Nobel Peace Prize nominee has to say.  It's worth your time.

"If you don't get vaccinated you will die or kill everyone around you!"  That is the fear mongering message being promoted right now.  Before it was, "save a life, stay home" and then it was, "wear a mask, save a life."  How interesting that the community leaders of this doctors' town wrote an open letter saying THIS! “We the undersigned institutions strongly believe that the predictions presented by Dr. Zelenko have been proven false and are not supported by the overall medical establishment, specifically in his wild conclusions as to the spread of the virus in our community,”

LET THAT SINK IN!

STOP CALLING JOE BIDEN, VICE PRESIDENT! HE IS NOT!