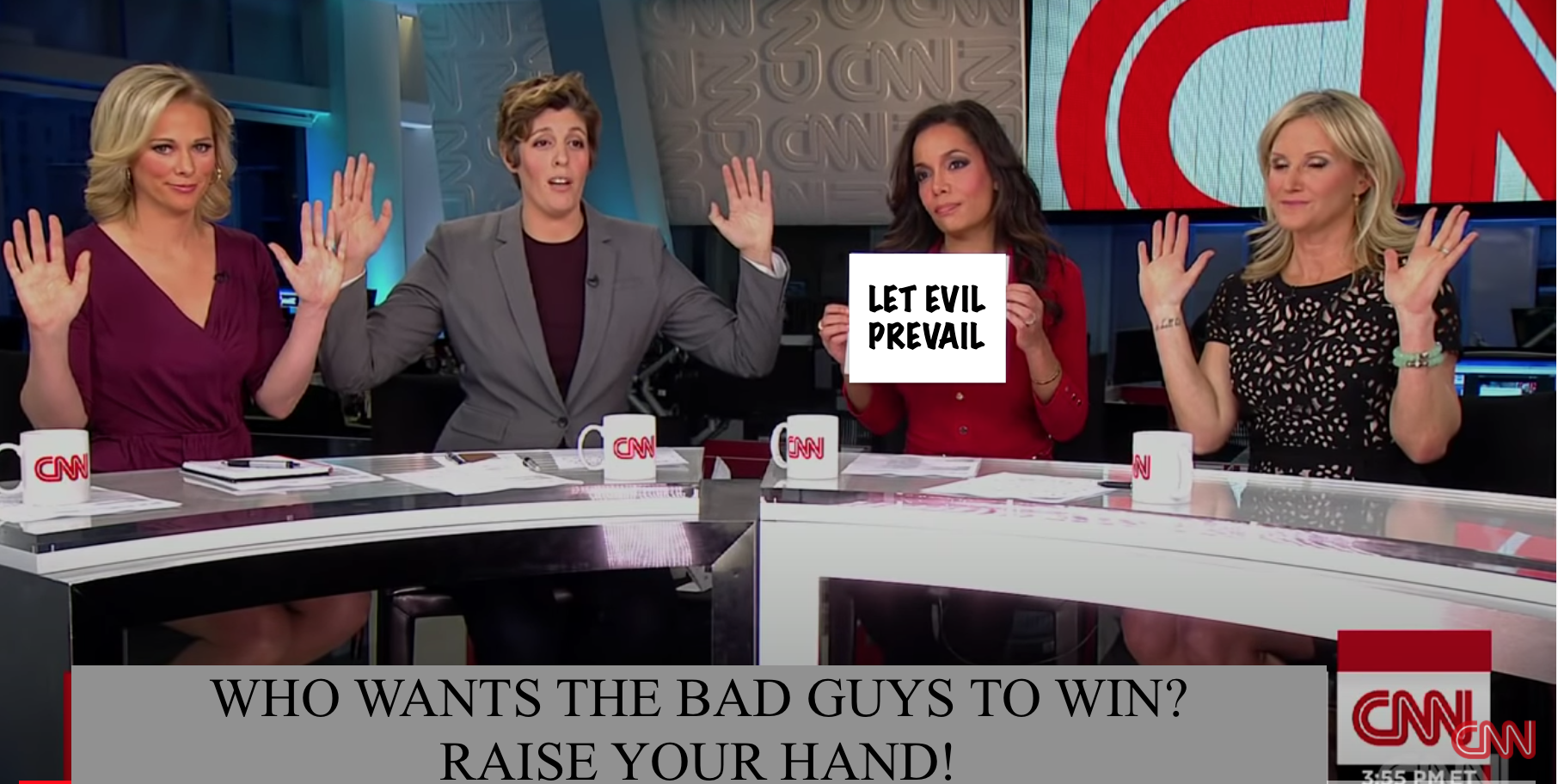 THE MEDIA WANTS EVIL TO PREVAIL!

A thought hit me this morning while listening to Liberal media outlets spew their feigned outrage regarding the Rittenhouse verdict. "We just can't have vigilantes running around..." This has become the theme with the liberal progressives. Most have gotten off the RACE track that is generally profitable, when the wager is high, because, well, the obvious!  WHITENESS!

The image of Clint Eastwood flashed before my eyes, you know, his most famous line in any movie, "Go ahead, make my Day!"  We all sat on the edge of our seats as Eastwood entered that diner and started to blow away the bad guys.  3 black men...but no one screamed RACISM!  We all just clapped, happy that the bad guys were put down.  WE CHEER WHEN THE GOOD GUY WINS!

How about the majority of Bruce Willis movies?  I think we all got excited when he said those famous words, "Yippee-Ki-Yay MoFu'er!"  We weren't rooting for the bad guys to win...not even the progressive liberals wanted that.  They wanted to see the bad guys blown away.

Every single Action Thriller movie that we watch, we want the bad guys to die!  Even when it is bad guy against bad guy, we want the better of the bad guys to win.  Take John Wick for instance.  We were enraged when the Mob killed his puppy...we wanted revenge as badly as Wick did.  These movies were box office hits and I can't imagine that it was only Conservative, future Trump supporters that made these movies famous.  Pretty sure there were an equal amount of Liberals shelling out money to see the good guy win!

How many condemned Harry Potter for laying his hands on Quirrell and watching him disintegrate--killing him?  I would presume the only ones who were upset about that were the evil loving, Satanists!  Harry shouldn't have been down there...he was supposed to be in bed and yet he went out to find the Philosopher's stone and he killed a man.  How many Liberals were upset about that?  How many Liberals boycotted this movie?

So, why is it that we are obsessed with seeing the bad guys die at the hands of the good guys?  Because, the majority of the world needs to know that there are people out there who will risk their lives to protect what they love and care about.  This is why these types of movies are such money makers and people flock to see them...we want the good guy to win!  We want to know when everything else fails us there are people who will risk their lives to defend the innocent and defenseless.

Are there people out there who would support Hollywood for making a movie where all the bad guys won?  Yes, I am sure there are a few evil people out there that would throw out $20 to see the bad guys win in the end, perhaps they work for CNN, MSNBC or CBS but the movie makers, the screenwriters and the producers KNOW that the vast majority of the world's population doesn't want to see that, we NEED to know that good exists, we need to know that someone is always fighting evil in the physical realm and even in the spiritual one.

In this latest Action Thriller we all watched, RITTENHOUSE, we witnessed that good finally prevailed but as the movie continues to play out, we see all the evil people that have been written into the script continue to push their diabolical intent and this movie has turned into a long running series...as most do.  I think I will stop watching it now and I urge others to do the same.  We shouldn't be supporting or funding such bad acting.

FASCIST FACEBOOK! IF YOU TELL THE TRUTH YOU ARE BANNED. WELCOME TO 1984!