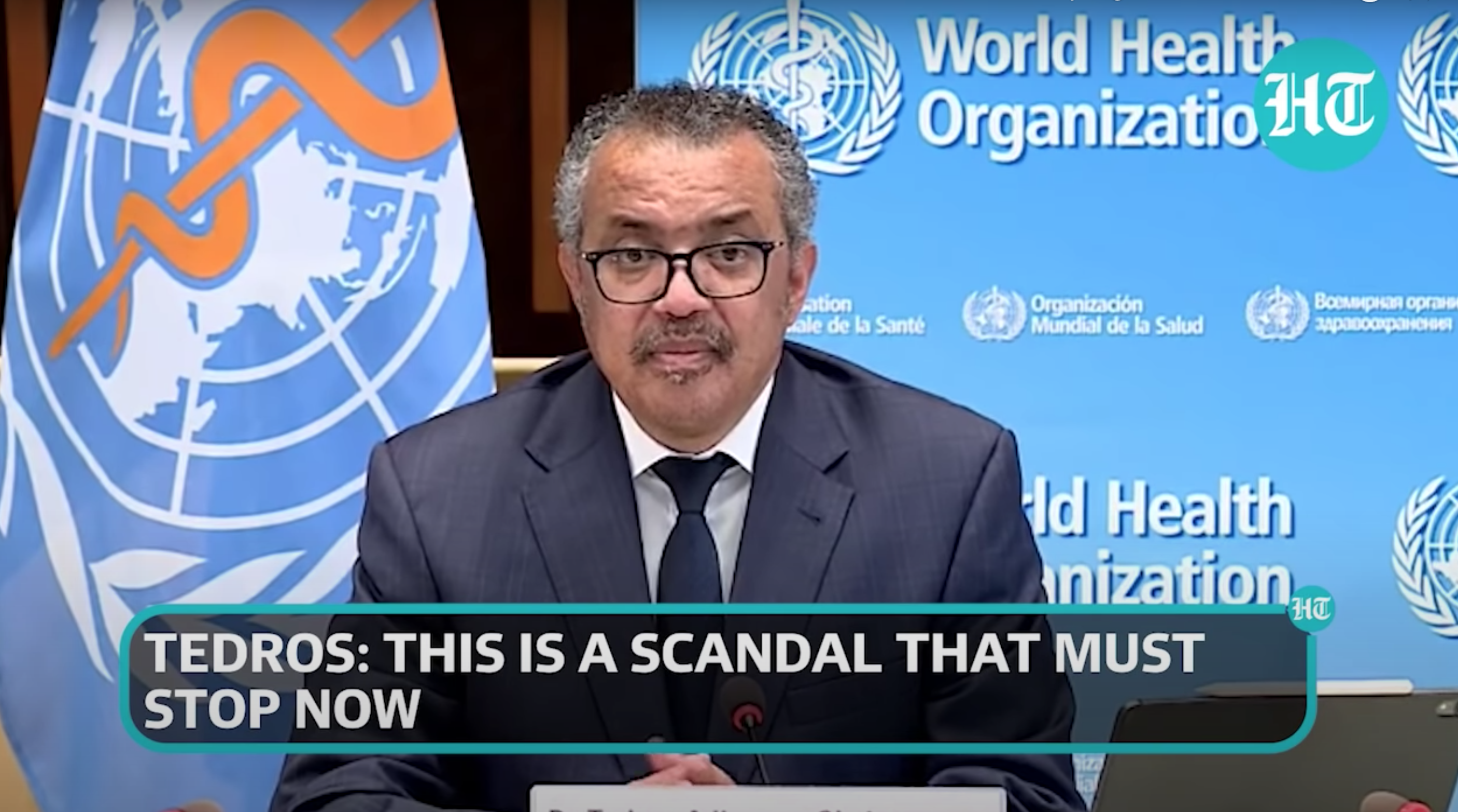 So here it is...The DIRECTOR (Chief in command) of the WHO, Dr. Tedros stating some unusual things in a Dec. 23, 2021 press conference.  Oh and by the way, for those ignoramuses out there, DOCTOR Tedros is NOT a medical doctor!  As a matter of fact he is the very first director of the World Health Organization that does NOT hold a medical degree, his doctorate degree is in philosophy. But he stated something very terrifying and  no one is talking about it.

The first video below, show Tedros saying something kinda terrifying.  But is what he said, REALLY what he meant?

What did he mean by this comment? "...AS WE SEE SOME COUNTRIES ARE USING TO GIVE BOOSTERS TO KILL CHILDREN, WHICH IS, NOT RIGHT."  One could easily take that statement out of context if the entire, or at the very least, more of the video is not seen. RIGHT! Because, he wouldn't really admit what many scientists and MEDICAL doctors are sounding the alarm on, would he?  That it is dangerous for children to take this shot and many medical professionals have stated that this shot can harm or even kill children, especially those who have recovered from COVID and have natural immunity.  "At a meeting last week of an FDA advisory committee, vaccine experts suggested that the agency require the pharmaceutical companies to hold larger and longer clinical trials for the younger age groups. A few said FDA should hold off on authorizing vaccination of younger children for up to a year or two."

The FDA factsheet on the pediatric vaccine trials also states that 0.04% suffered an extremely serious adverse reaction however they conveniently do not go in to detail on the type of reactions that occurred, just stated, extremely serious.  Joseph Ladapo a UCLA medical professor and another well respected Yale medical professor, Harvey Risch made the claim when researching the VAERS database to find information of pediatric adverse reactions to this experimental vaccine, "The implication is that the risks of a COVID -19 vaccine may outweigh the benefits for certain low-risk populations, such as children, young adults and people who have recovered from COVID-19."

So let's take a look at another video put together that gives us a little more context of what Tedros was concerned about.  Now mind you this video was taken MONTHS before his most recent Dec. 23, 2021 statement about Boosters and killing children.

Tedros is calling out wealthy countries for giving unnecessary boosters to anyone, while poor countries haven't even received ONE DOSE.  He goes so far as to call this action, a "SCANDAL!"  A scandal, I'd say, those are some pretty serious accusations...  But what did he mean by, "AS WE SEE SOME COUNTRIES ARE USING TO GIVE BOOSTERS TO KILL CHILDREN, WHICH IS, NOT RIGHT."   Let's get back to that comment that he made less than a week ago, really just a few days ago.

Tedros knows full well that these experimental vaccines are potentially dangerous for children. On the WHO website it currently states this, "More evidence is needed on the use of the different COVID-19 vaccines in children to be able to make general recommendations on vaccinating children against COVID-19."

So after he made that comment, and didn't back track from it, or even clarify it, he went on to say, “Then the equity issue comes here. Instead of boosting a child in high-income countries, it’s better to vaccinate the elderly in countries where the elders who have not been vaccinated, even the primary vaccines, so the equity issue should also come into play.”  It is like he is giving a warning about children dying from this vaccine and then carries on with his "equity" concerns.

Now watch that first video again.  The editor of the The Post & Email obviously watched it several times and was so concerned at Tedros' statement that she contacted the WHO's media Dept and questioned them about this comment.  Their response:

"Dr Tedros’s intended quote is: “So, if it (the booster) is going to be used, it’s better to focus on those groups who have the risk of severe disease and death, rather than, as we see, some countries are using to give boosters to children, which is not right.”

What occurred on Monday at the WHO press conference during his delivery of the word “children” is that he got stuck on the first syllable “chil” and it came out sounding like “cil/kil.” He then correctly pronounced the same syllable immediately after, with it coming out audibly as “cil-children”. Any other interpretation of this is 100% incorrect."

Did it sound to ANY of you that Tedros stumbled over his words?  And if he did, and realized he had said something like that, he would have immediately corrected it for those listening...he certainly knows what the words "KILL CHILDREN" mean, so he would have absolutely corrected what he had just said, knowing the implications of that statement, even if he (yeah right) forgot how to pronounce, CHILDREN!

LIARS LIARS-COVID LIARS! BIG PHARMA–VACCINES AND OH SO MUCH MONEY TO BE MADE!