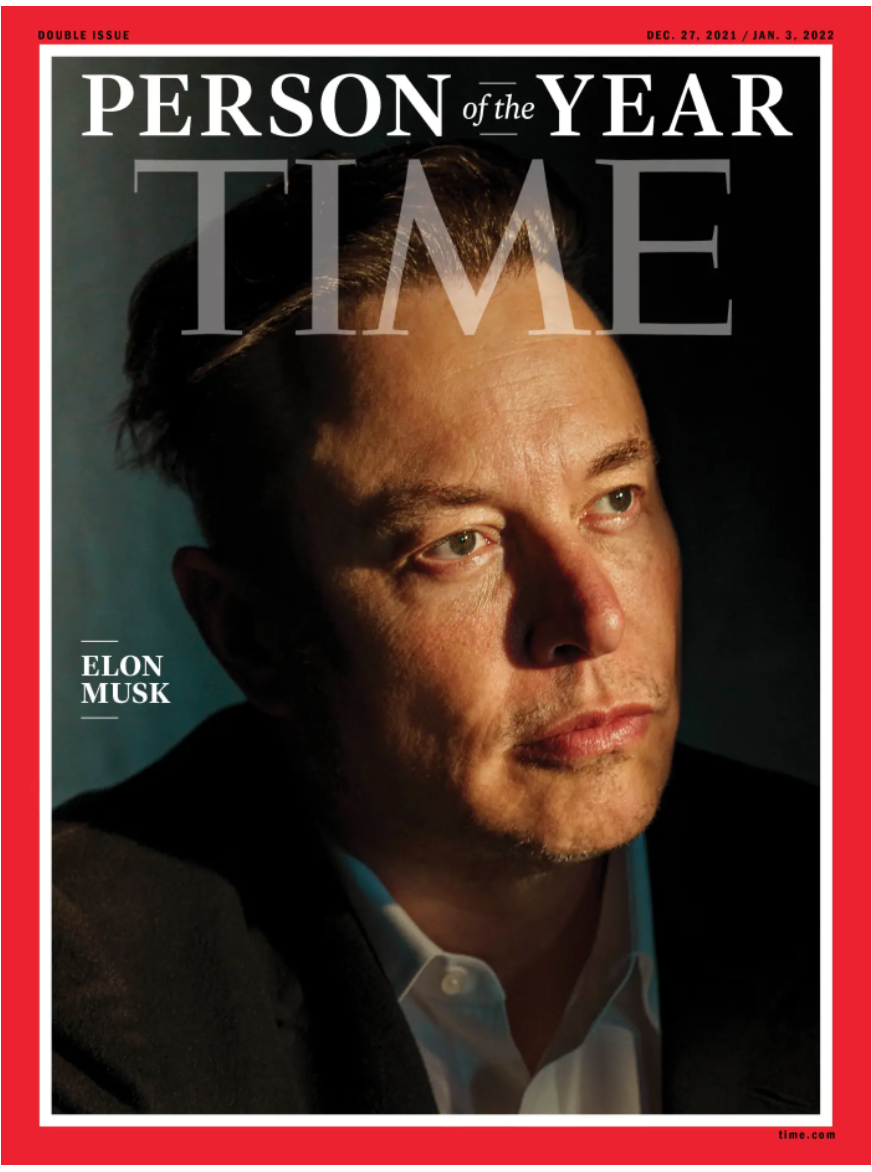 Elon Musk person of the year, 2021. Now the left hates him. That was quick!

Remember when the left LOVED Elon Musk almost as much as they once loved Donald Trump?  Like, um just a few months ago...the Liberal Left was fawning and drooling all over Elon Musk, he was the Golden Boy of brilliance.   As a matter of fact the LEFT LOVED Elon Musk so much that they made him Time Person Of The Year back in December!  Hmm, how many months ago was that?  A little over 4 months!  And back in May of 2021, the current most hated man by the American Libs was invited to host the most Lib loved show, SNL!  WOW, how quickly the current changes to DC...directly that is.

In 2010, Musk was invited to the Kennedy Space center where he met with then Democrat President Barack Obama. In 2012 Musk delivered the commencement speech at the California Institute of Technology.  Musk was also featured in Bloomberg's Businessweek magazine in that same year.  In 2013 Jimmy Kimmel gushed all over Musk when he was his headline guest on the Jimmy Kimmel Live show.  The liberal paparazzi couldn't get enough of him at the Vanity Fair Oscar party in 2014 and although he didn't feel the need to slap anyone, he was a huge hit!  2015 saw Musk seated next to George Lucas at the Time 100 Gala and all the Hollyweird Libs wanted to rub his elbow simply to excite their own static.  Oh and the weirds of the Holly didn't stop there, but were ecstatic when he agreed to play himself on an episode of  the Big Bang Theory!

Everyone loved Elon Musk, everyone wanted to be in his electromagnetic presence, from the libs of Hollywood, Leftist colleges, the US Senate, to Democrat Presidents.  The media mob took every opportunity to get an interview...and even though they knew he was a bit eccentric and didn't like to play by the establish rules, they still wanted to blast into space with him...

And then came the rub. "Musk leaves a federal court in New York in 2019. The Securities and Exchange Commission had asked the court to hold Musk in contempt for violating an agreement that requires he get pre-approval for social-media posts about Tesla. The judge asked Musk and the SEC to go back to the drawing board and better define exactly how and when Musk's tweets need to be reviewed."

TWEETS!  Here is where it started.  “The only tweets that would have to be reviewed would be if a tweet had a probability of causing a movement in the stock.  Otherwise, it’s — hello, First Amendment.”

So now, moved by DC, the dirty current, Musk is a threat to the vile Democrat establishment and they are doing everything in their power to stop him, silence him and cancel him.  They just might short circuit themselves in the very near future if Elon Musk has his way and exposes them for the despicable swamp creatures they are!

IF THERE WAS REAL SECURITY AT DC ON JAN 6TH, NONE OF THIS WOULD HAVE HAPPENED!