The TRUTH about COVID vaccines told by those who forced the masses to take them. "I knew these vaccines were not going to protect against infection."

Yup, that's right.  It was just announced that clinical trials to study adverse reactions, including death, from the COVID experimental mRNA shot, will be underway.  Hmmm, weren't adverse reactions one of the very FIRST things that a drug maker would test????  Or is that just something just little ole me would think crucial in the creation of a new treatment?  Is it going to kill a person or seriously harm them?  Yeah, I think that is important  information to know!  So, the first place I like to look for medical information is Fauci's very own NIH (National Health Institute).  So I just typed in my byline to this article and NIH's Pubmed was the very first hit I got, and what I found there is pretty stunning!

"However, there is no comprehensive review of safety data reported from the vaccine trials, which is critical information to inform the policies in order to improve uptake of COVID-19 vaccines and mitigate the risk aversion perceived due to the COVID-vaccine side effects."  Pubmed March 27th, 2021

Ok, what struck me here, besides the OBVIOUS was the words, "mitigate the risk aversion".  So, I know this is a business term regarding profit vs loss, but why was it being used for these alleged vaccines?  I had to look it up to make sure my tinfoil hat wasn't on too tight.

What is risk aversion?

Risk aversion is the act of choosing investments with an overall higher level of stability. Volatile investments are those in which the outcome cannot reasonably be predicted, and the investor could lose or make a substantial amount of money at any time. A conservative investor, or risk-averse investor, invests for lower risk while expecting lower returns and to preserve capital.

I am sure the writers of the Pubmed piece were talking about the risk to people, not profits.  Right?  Of course they were.  I guess it was just the string of words, Mitigate (make less severe), Risk Aversion (safe investments), Perceived (become aware of).  This just didn't set well with me, and I suppose that was compounded by the first sentence, "However there is no comprehensive review of safety data reported..."  Good Lord, Joe Biden rolled up his sleeve on Dec. 21, 2020 to inject himself with an experimental compound that had no safety testing?  Yeah, ok.  And then the entire world was told to do it as well!

So now, just shy of 2 years into this nightmare, Pfizer and Moderna have decided it would be a good idea to launch clinical trials to track adverse health issues stemming from the COVID-19 vaccines, such as myocarditis – inflammation of the heart muscle.  "Enrollment for the study in the U.S. and Canada has not started yet. However, the research team has already identified more than 250 patients with myocarditis, according to Dr. Dongngan Truong – a pediatrician at the University of Utah Health and a co-lead on the Pfizer study."   A Pediatrician?  Interesting.

Roughly 2 years of being told that this shot was safe and effective...2 years of being berated and hated if  you refused...vaccine mandates and vaccine passports, socially ostracised, people losing their job, social media censoring and banning people for questioning or speaking out about this "vaccine" but the most repulsive is that people died, tens of thousands of people died from this experimental shot and millions seriously injured!  All the while these pharmaceutical companies made Hundreds of BILLIONS of dollars!  Why, because they mitigated the risk aversion perceived by LYING to the entire world!

And now, after 2 year these drug companies have decided that the "perceived" risk is really an obviously seen risk and there is no mitigating it at this point and they should do a 5 year clinical study to follow a couple hundred people out of billions to check out those adverse reactions for themselves.  Brilliant I'd say.

Now considering that the Vaccine Adverse Events Reporting Service(VAERS) is said to only receive about 1% of actual adverse reports, mostly because to file a report takes the Doctor a tremendous amount of time and paperwork...why make it easy for them?  Because obtaining the real data is not encouraged.

That being said, even these numbers from VAERS are staggering! 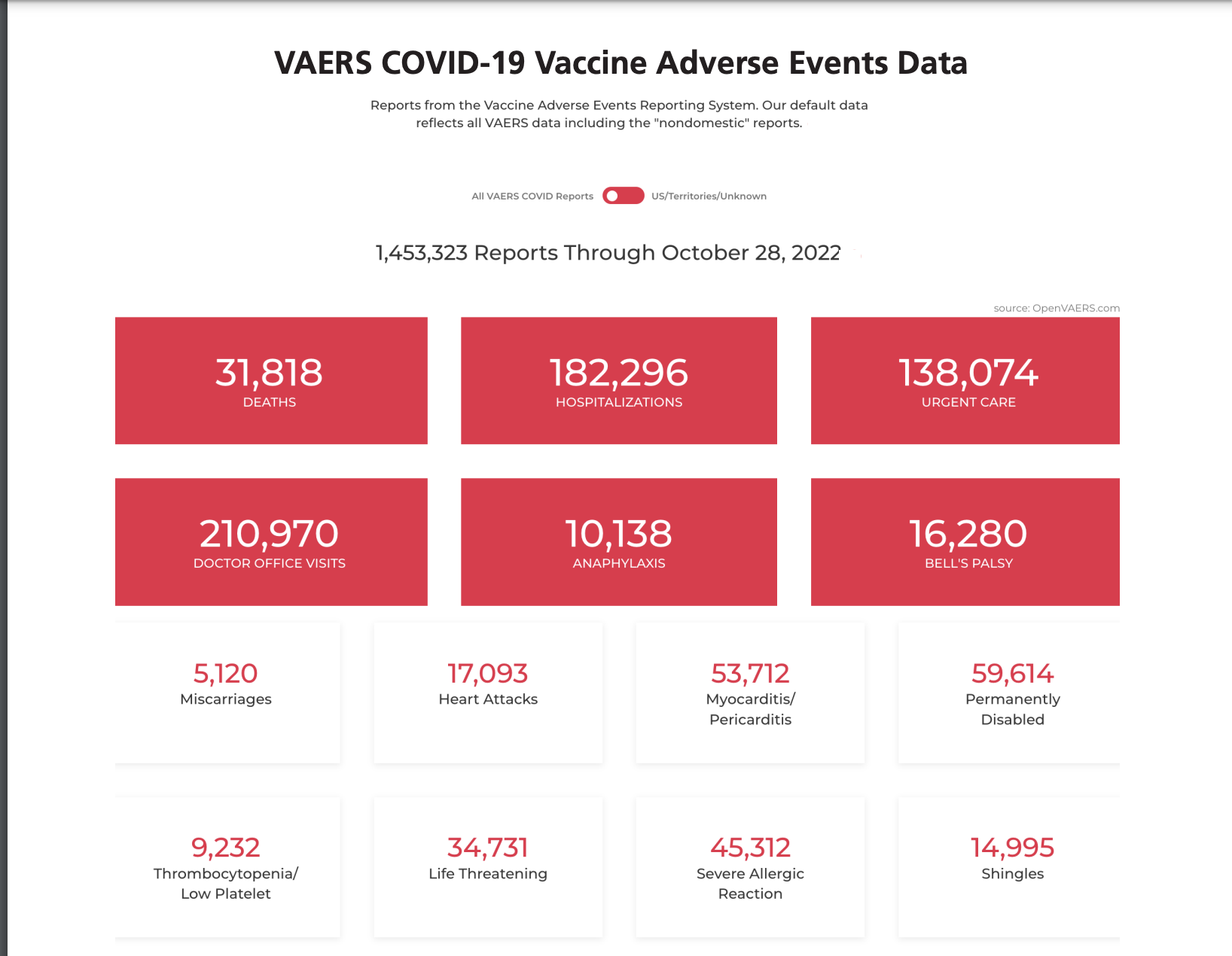 Look at those numbers and up them 99% and these is just from the United States!

Excess deaths in England and Wales are currently running higher than in the main pandemic years of 2020 and 2021, figures have shown. Throughout October, there have been an average of 1,564 extra deaths per week, compared with a weekly average of just 315 in 2020 and 1,322 in 2021. Latest figures from the Office for National Statistics (ONS) showed that in the week ending Oct 21, there were 1,714 excess deaths in England and Wales, of which only 469 were due to Covid – just 27 per cent of the total. It is 16.8 per cent higher than normal. Deaths are also running higher than the five-year pre-Covid October average from 2015 to 2019, figures showed. Excess deaths are stubbornly high and show no sign of slowing, despite a fall in coronavirus cases. Data from the Institute of Faculty of Actuaries Continuous Mortality Investigation (CMI), which takes into account the ageing population, is also showing significant increases in excess deaths. The CMI found that there were 13 per cent more deaths this week than if death rates were the same as 2019. (Source.)

So, yeah, clinical trials are forthcoming to see if this "vaccine" is indeed safe like Facebook constantly tells us it is and all these people dropping dead are just, well, dropping dead. Even the mention of any word starting with a Vac will trigger a Facebook blue box directing us to their vaccine propaganda page.

When will people actually stand up and say, ENOUGH IS ENOUGH!  And let's not forget...

"In the largest health care fraud settlement in history, pharmaceutical giant Pfizer must pay $2.3 billion to resolve criminal and civil allegations that the company illegally promoted uses of four of its drugs, including the painkiller Bextra, the U.S. Department of Justice announced Wednesday."

The main theme in all of Pfizer's criminal activity was, wait for it...   Illegal marketing!  Ya don't say!  I guess this is the main reason that the drug companies who made and distributed these alleged safe and effective "vaccines" were granted immunity from any prosecution from those who suffered death or injury.  Our Government truly had their back on this one!