It is not unusual for me to see myself sitting in Facebook jail, nor is it uncommon that the things I post do not go unpunished with the all too familiar GREYED-OUT Facebook censor that attempts to thwart free speech and opinions.  And now, with people leaving platforms like Facebook, Twitter and Instagram for other  independent, more Conservative places like Gab, Mewe, and Parler that are not hellbent on censoring everything they may not agree with the social media giants may be feeling the loss.  After all, organizations like Facebook and Twitter are NOT a part of the Mainstream media that has a theoretical "responsibility" to report the TRUTH to people.  No, Facebook, Twitter and Instagram exist to share ideas, opinions and yes of course cute animals pics...your latest dining experience and those adorable photos of your newest grandbaby.  Billion dollar companies like Facebook and Twitter are even given SPECIAL governmental protection but these days they have become such forces, like the DARK FORCE, that they ultimately have the ability to do such things as sway an election, promote propaganda like the Russian collusion hoax or even influence opinions on an Impeachment trial!  Yes, they are that powerful!  And, they enjoy not only government funding to the tune of billions of dollars.  According to the Guardian, 9.3 Billion in 5 years, but they also receive special protection under Section 230.

"Giant technology companies in the US, which include some of the world’s most profitable firms, have been pledged at least $9.3bn in state and local subsidies over the last five years – much of it coming from the coffers of cities and states with failing infrastructure, struggling schools and broken budgets."  These are in the form of tax and subsidy packages.

The Verge.com gives a condensed, user friendly explanation of section 230, which I am posting below.  I trust that you can do further research if you want to know more. 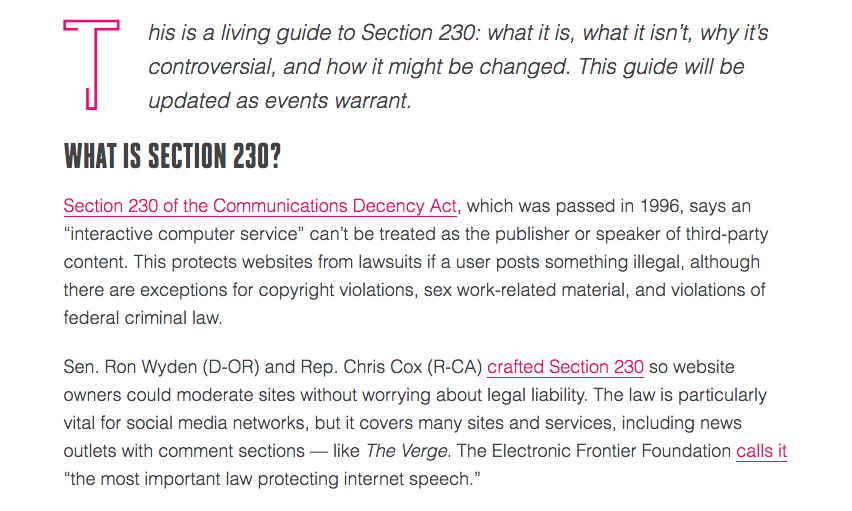 Section 230 according to Theverge.com--protect Social Media Giants so they can censor free speech free of liability.

I am not sitting here, writing this necessarily to bring reference to Section 230, which these Social Media GIANTS, that are worth BILLIONS are hiding behind.  Nope, my goal here is to investigate the so-called  "fact-checkers" that Facebook employs to put those Grey warnings up or to even remove content they find disagreeable or offensive to THEIR political platform.

So, today I watched this little diddy called, The Plot to Steal America.  I enjoyed watching it and it contained content and opinions greatly shared by the majority of Conservatives as it has been viewed 1,350,225 views since Dec 7, 2020.  I am posting it here so that you can watch it and then tell me what you think.

I thought that this was worthy of sharing on my personal facebook page.  I added my passionate opinion and the link into my comment section and hit POST.  As soon as it posted this is what I saw. 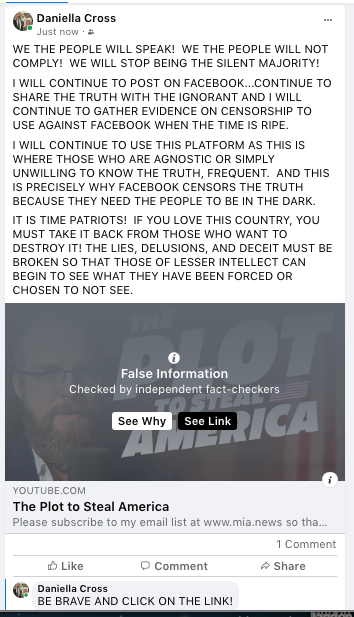 I wanted to "SEE WHY" Facebook banned the transparency of this video and deliberately hid it from public view.  So, I clicked on the "see why" link. 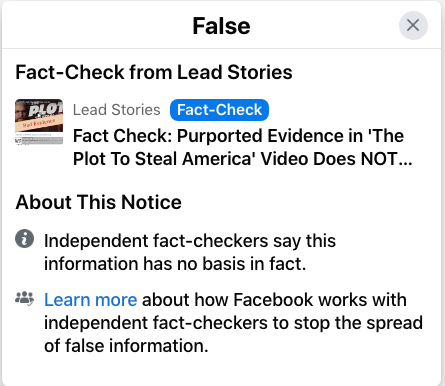 "independent fact-checkers say this information has no basis in fact."

"Learn more,"  well OK!  Now the fun begins as the rabbit hole is just a hop away.  Let's see how deep the hole is.

I click on the blue link, "Code of Principles." Shouldn't have been a RED link!   WHOOSH! Here we go!

I am now falling through a web of good looking, warm and fuzzy WORDS.  Words like, "commitments," "promote excellence," "nonpartisan and transparent."  Check out their site and you may also get mesmerized with the matrix of check marks!  But ONE word stood out to me, POYNTER!  The word itself derives from the Latan, meaning to pierce.  It is (or is it) ironic that the legal term for pierce means, "to see through the usually misleading or false appearance of the object of summary judgment is to pierce the pleadings and allow a judgment on the merits."  Ah a cat and mouse game for intellects perhaps?  I'm playing...

So who is this Poynter Organization anyway?  I could take the traditional route and spend A LOT of time slipping further down the hole and shining a light at the dots, but I have found that it is much easier to get to the base of any hole by simply seeing who invests in the digging...like the Major Funders.

"Here is an alphabetical list of our funders, including all foundations, corporations, partners and individuals that gave the Poynter Institute more than $50,000 for 2019 or 2020. This list was last updated in December 2020."

If you want to see the rest of the Liberal list that supports this supposed Fact-Checking Consortium just click here...I think I have made my point.

You can complain, you can blame others OR YOU CAN EDUCATED YOURSELF AND SPEAK UP!