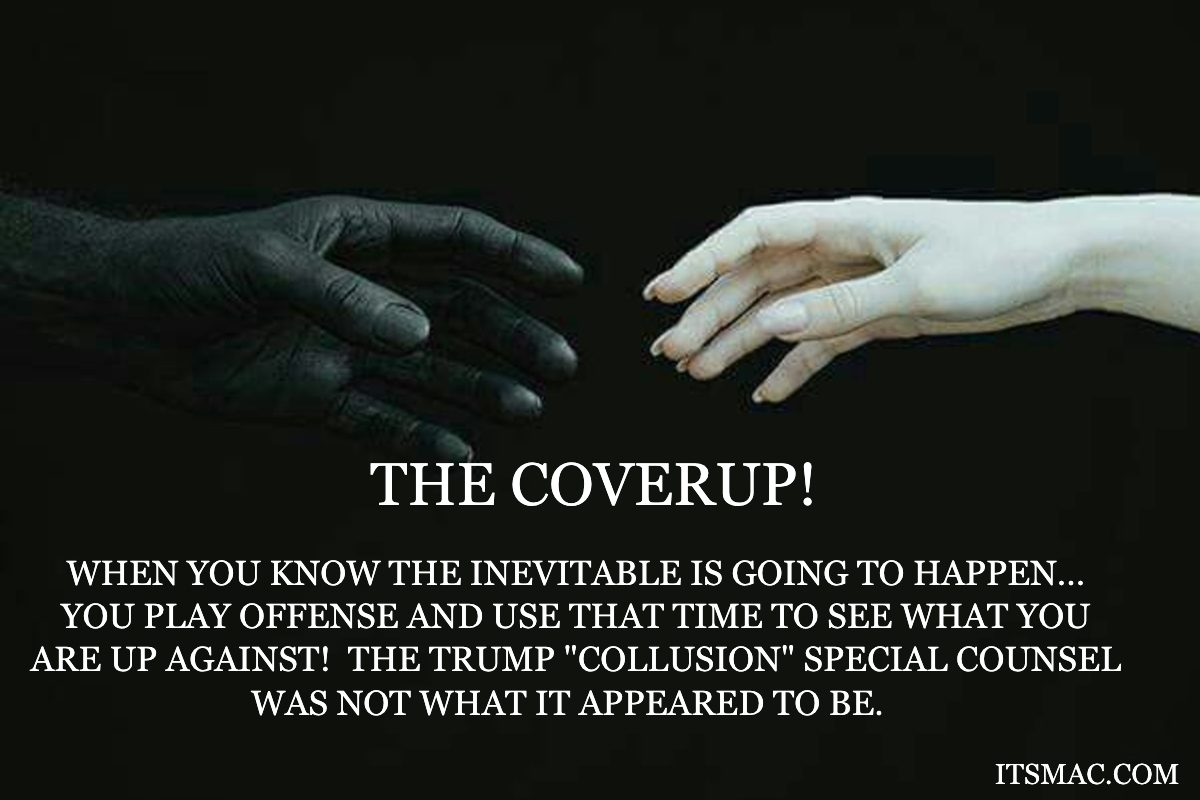 We all know what a Trump Card is: a valuable resource that may be used, especially as a surprise, in order to gain an advantage. For the last 675 days, Robert Mueller has been searching for a shred of evidence that links President Donald Trump to the Russians, or has he? And not simply about Trump knowing Putin, or having Presidential conversations with him, but to persuade the American people and even the people of the World that somehow Donald Trump stole the election from Hillary by means of COLLUSION with the RUSSIANS. As a county, both hues, Red and Blue have wondered what exactly was inferred by the term that is now very ensconced in our vocabulary; collusion. It seems to the Blue’s it was a dastardly relationship with the Commies who literally took control of the voting booths and changed all the Hillary votes to Trump and they also used psychic mind control Bots to cause otherwise sensible people to change their vote from Hillary to Trump, with Trump pulling all the strings. And then you have the Reds who are much too pragmatic to even consider the above fantasy who heard the words, “propaganda”, “spreading information about Hillary” and scratched their heads knowing they voted for Trump because they liked and agreed with what he proposed and what he promised if he should get elected. One of those promises was to Drain the Swamp, and it really wasn’t until the lead up to the 2016 elections that anyone really caught a glimpse of what lurked at the bottom of the swamp.

Moreover we all know what has transpired in the last 675 days and even the events that led up to the Mueller Special counsel…and as much as the Left wants us to look away and forget Hillary’s actions and those of the FBI, DOJ and the DNC and the fact that Hillary has been so very quiet lately, the inquiring mind just needs to click all the colors together to form that uniform, cohesive cube.

One of the things that got Trump supporters all riled up, and rightfully so, was the chant; “LOCK HER UP!” This was indeed a battle cry of the Red wave as Trump was exposing the corruption at the highest levels of our Government. Benghazi had been exposed, Fast and Furious was exposed, Hillary’s email scandal, her blatant obstruction of Justice, destroying evidence after being subpoenaed by Congress, her close relationship with the Russians, Uranium One, Fusion GPS, fake dossier, Weiner exposed–literally, Comey changing Gross to Careless, Strzok and Page admitting they HATED Trump, Page testifying that Obama’s DOJ told them to stand down on Hillary…the list goes on and on and on, AND ON. But all of this was conceived before the election and the Hillary train was rolling down the tracts to presumed victory. There was NO, absolutely NO accusations by the Democrats that Russia was meddling in our Election. As a matter of fact, Obama chastised Trump in front of the world because Trump knew something was going on…not in his favor but against him. We saw hours of undercover video of the DNC rigging the polls. Trump made this claim over and over again!

After Trump won, the Blue's were prostletized daily by the, Bought and Paid For Media that The Donald, the man who was known and loved by the entire world was now a deranged lunatic without even the slightest chance of winning and that his supporters were a "Basket of Deplorables", "old, stupid, uneducated alcoholics" and the Media was complicit in all of this...but enough of what you already know, it is what you don't realize that is important.

Here it is, the bottom line...Mueller has not been spending all this time looking for Trump Collusion, simply because he knows none existed. He has been investigating HOW to control the collateral damage that will ensue very shortly regarding the REAL Russian Collusion; the REAL obstruction of justice. The Swamp is now extremely vulnerable and all the creatures in it know that their murky waters will soon be pumped out. Who will be left, wiggling on the bottom, gasping for breath is yet to be known to us, but, Mueller and those who have a reason to be worried needed to know EXACTLY what there is to know and who knows what. So, under the cover of Investigating the Trump/Russia Collusion line, and feeding their Vulture Media pets a steady diet of old, rotting flesh, Mueller and his team of Liberal Democrats have been investigating all right but not who you think.

I would venture to guess that NOW the Mueller team knows every single thing that is going to be thrown at Hillary and she will NOT go down alone. I will bet money that the petty indictments with Trumps past associates are simply a ruse and that the real 'investigation" has been all about damage control to what is about to happen to our Government and to our Nation once Trumps makes good on this Election Promise to--LOCK HER UP! Trump knew that Mueller wouldn't find anything, so he just let this run its course. And that Special Counsel report...we won't see it because it contains more information regarding the Obama administration than Trumps, and this is exactly why Trump wants the entire report made public, but the Democrats want it for their eyes only...THEY want to see it all. Go figure...

675 days evidently was enough time for the Defense of the Swamp to prepare! And the first statement, in this case, is: "SPECIAL COUNSEL DID NOT FIND THAT ANY U.S. PERSON OR TRUMP CAMPAIGN OFFICIAL KNOWINGLY CONSPIRED WITH RUSSIA." This would include Hillary as the Special Counsel couldn't investigate the accused without looking into the accuser.

My opinions of course, but if anyone finds a suicide note...I didn't write it!

SYSTEMIC RACISM IS A LIBERAL LIE AND CHICAGO PROVES THAT!