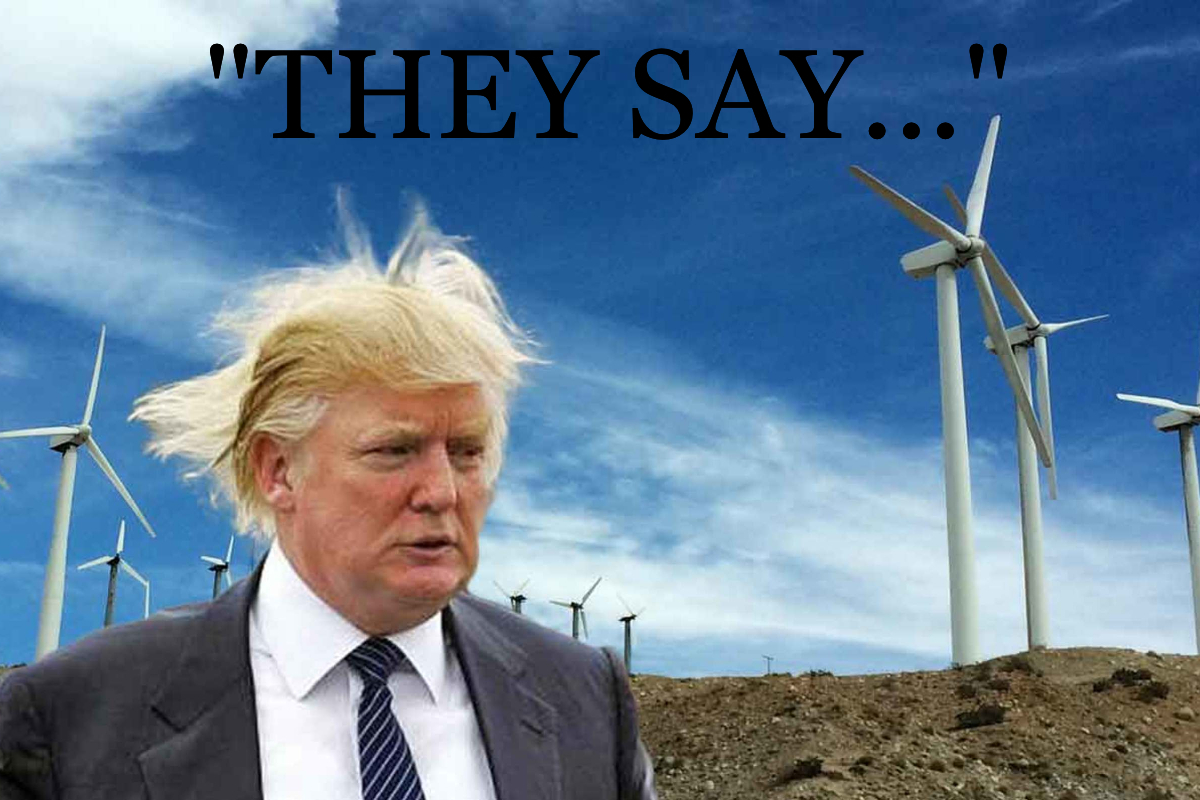 "And they say the noise causes cancer. You tell me that one?"

Another bout of FAKE NEWS!  "TRUMP CLAIMS WIND TURBINES CAUSE CANCER!"  Just a simple Google search and you will see page after page of media outlets bashing President Trump for making a claim that Wind Turbines cause cancer.  But did Trump really say that?  Well, if you trust the media he did.  Iowa Sen. Chuck Grassley — a champion of the wind energy tax credit — said President Donald Trump's comments that wind turbines cause cancer were "idiotic" in a call with reporters Wednesday.  Grassley is a Republican!  But he sure went with the media narrative.  When addressing the National Republican Congressional Committee’s spring dinner Tuesday night, Trump, who is not a fan of the Wind Power sham, made this statement, "And THEY say the noise causes cancer..."  So, I suppose we should investigate who the THEY are, because Trump didn't emphatically claim this to be fact, he simply stated that, "They say..."

ABC NEWS did a report in 2013, on a woman from Massachusetts, "I couldn't understand why she suddenly developed headaches, ringing in her ears, insomnia and dizziness to the point of falling "flat on my face" in the driveway."  She also was experiencing "fluttering heart" problems.  This woman, Sue Hobart, wasn't alone in her sudden decline in health, as a matter of fact, according to ABC NEWS, "Hobart and dozens of others in this small Cape Cod town have filed lawsuits, claiming that three 400 feet tall, 1.63 megawatt turbines (two owned by the town and one owned by Notus Clean Energy) were responsible for an array of symptoms."  In in the summer of 2010, just months after Hobart began feeling very ill, three wind turbines had been erected in her town, one of which runs around the clock, 1,600 feet from her home.  The mega conglomerate wind energy industry called these plaintiffs, "Whiners!"  Finally, in 2011, Hobart, desperate to find out why she suddenly could barely function with day to day issues, she  sought medical help.   A doctor at Harvard Medical School diagnosed Hobart with Wind Turbine Syndrome.  WHAT?  What the heck is Wind Turbine Syndrome?

The name was coined by Nina Pierpont, a John Hopkins University-trained pediatrician.  Pierpont, who lives in upstate New York, calls wind turbine syndrome the green energy industry's "dirty little secret."  This from Gatehouse Media:  "A six-month GateHouse Media investigation found that wind developers representing some of the world’s biggest energy companies divide communities and disrupt the lives of residents forced to live in the shadow of their industrial wind farms.

The investigation found that companies convince landowners to sign away their property rights for generations based on the promise of potential profits and the minimization of potential problems associated with wind turbines.

Those problems include shadow flicker, loud noises and low-frequency vibrations that have driven dozens of families from their homes. Many of them claim to have suffered serious health issues from the turbines before departing. Some say they’ll never be the same.

The wind industry has known about these issues for years – many of its contracts contain clauses acknowledging these effects – but it denies turbines affect human health, even as complaints mount nationwide.

Landowners often overlook potential problems until it’s too late. Many who sign contracts can’t terminate the agreements, even if they later beg for relief from what they deem intolerable living conditions. Some covenants bar people from suing or even publicly criticizing the projects.

Those who don’t sign agreements can face the same impact of living near wind turbines erected on neighboring properties. But they receive no compensation for the shadow flicker, noises and vibrations.

Many of these residents have become vocal opponents of the industry. Dozens of them, including the Shineldeckers, have sued the wind companies for destroying their quality of life.

Wind developers have settled more than a half-dozen such cases nationwide, even while admitting no wrongdoing. Among the companies to settle is Michigan-based Consumers Energy, which owns Lake Winds Energy Park. The Shineldeckers were among several neighbors who sued the company.

Many worry about the impact these turbines will have on their homes – some families interviewed have moved out of their houses after wind farms started operating; others have stayed but suffer from shadow flicker, noises and vibrations.

Elected officials tasked with voting on these developments have, in many cases, signed their own contracts with the wind companies, raising concerns about conflicts of interest."

Billions of Government dollars are at stake for these Wind Energy companies!  That's passing a lot of AIR people!  "Industrial wind turbines generate countless complaints nationwide about sleep disturbances, migraines, nausea, ear pressure, blurred vision, tinnitus and heart palpitations. Rampant reports about such effects from the Shirley Wind Farm in Brown County, Wisconsin, prompted the local Board of Health to declare the turbines a human health hazard." Gatehouse disclosed in 2017

Now I'm going to just step back for a second and add this all up.  Whenever there is money involved, and in the case of Wind Turbines, we are talking about BILLIONS of dollars, there is going to be a LOT of greed & deceit.  We see it in Big Pharma, Planned Parenthood and Monsanto, all claiming they are here for US...to help us.  And when we begin to see people, thousands of people, coming out saying that these Turbines in their communities are making them sick, maybe someone should listen.  I mean, I could literally write pages and pages of Medical Professional claiming that these turbines are making people sick.  We know that vibrations and frequencies DO have an affect on the body, so why are these HUGE Conglomerates dismissing claims that their Turbines are making people sick?  Follow the jetstream of money.

Which brings us back to the, THEY.  They are people like,  Johns Hopkins trained Doctor, Nina Pierpont and  Dr. Stephen Rauch, Washington University’s Dr. Salt,  an otologist at the Massachusetts Eye and Ear Infirmary and a professor at Harvard Medical School, not to mention Elon Musk who has his Tesla employees wear reverse frequency headsets to keep them  healthy and stable while working around the loud machinery that produce parts for his cars...these are just a few professionals who agree that frequencies and vibrations have an effect on the body.  If you want to learn more about how different frequencies affect the human body read more from the  National Research Nuclear University HERE!

So, now  that we know who some of the "they" are, did Trump actually say that "Windmills" cause cancer?  No, he did not, but it appears that he is standing on the side of those individuals who have been  adversely affected by these Turbines.  In his usual form, he is supporting the average American who feel that they have NO voice against these behemoth corporations.  Trump is saying he hears YANNI even though so many hear LAUREL!