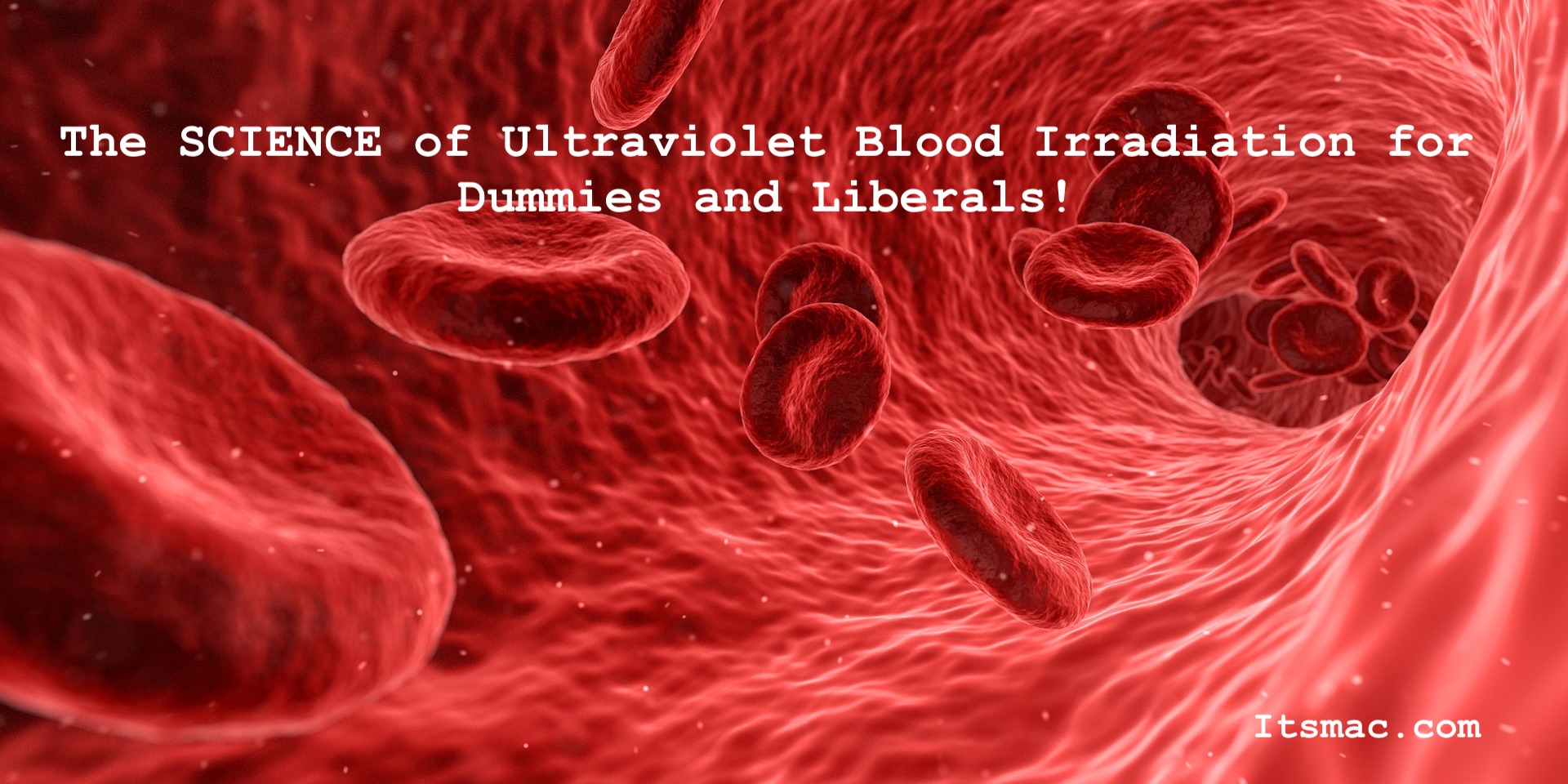 The claim: Ultraviolet light has been injected into the body for years as a treatment to kill bacteria and viruses

"As President Donald Trump received pushback for floating the idea that COVID-19 patients could receive treatment using ultraviolet light or injections of disinfectants, many people on social media raced to his defense with claims about the use of UV light as a medical treatment."~USA TODAY

I know this is old news but I am determined to clean the air and shed some light on a comment President Trump made during a COVID Press Conference on April 23, 2020 while speaking with Bill Bryan, undersecretary for science and technology at the Department of Homeland Security and make the TRUTH KNOWN! Obviously, Bryan had been sharing Ultraviolet Light Therapy with the President as a "potential" cure for the virus...it is well known that UV light is used  and has been used as a DISINFECTANT for decades in many places including hospitals, for public drinking water, waste water facilities and intravenous IV therapy was extremely popular and effective  prior to the advent of mass antibiotic production and large scale immunizations--AKA Big Pharma. But nonetheless, it was a therapy used by medical professionals through the 60's and with the super bugs that are being resistant to antibiotics, this type of IV UV treatments are regaining popularity in medical communities.  Perhaps USA Today missed THIS ARTICLE from the AP put out on April 20, 2020 discussing  UV light treatment.  THREE DAYS BEFORE PRESIDENT TRUMP DISCUSSED USING THIS MEDICAL PROCEDURE TO THE PUBLIC!  Arrrr, it frustrates me so much that the hatred of Trump is so virulent that so many potential cures for COVID were disregarded by the hateful Left and President Trump was mocked, slandered and utterly disrespected simply because he wanted to give everyone, worldwide the hope for a potential cure for CV-19 using treatments that had been PROVEN effective to kill certain viruses and bacterias.

“Our team has shown that administering a specific spectrum of UV-A light can eradicate viruses in infected human cells (including coronavirus) and bacteria in the area while preserving healthy cells,” stated Dr. Pimentel of Cedars-Sinai. Ali Rezaie, MD, one of the inventors of this technology states, “Our lab at Cedars-Sinai has extensively studied the effects of this unique technology on bacteria and viruses. Based on our findings we believe this therapeutic approach has the potential to significantly impact the high morbidity and mortality of coronavirus-infected patients and patients infected with other respiratory pathogens. We are looking forward to partnering with Aytu BioScience to move this technology forward for the benefit of patients all over the world.”

Niels Ryberg Finsen, won the Nobel Prize in Physiology Medicine 1903 for his great success in using UV light in treating lupus vulgaris, polio, lung infections and some forms of cancer.  The infamous scientist Dr. Emmett Knott, of Seattle, not only held patents for his development of Intravenous UV light therapy also know as Ultraviolet Blood Irradiation (UBI) Therapy to treat blood infections but the Knotts IV device received "grandfather" FDA status.  Knott's patented device treated thousands of people in hundreds of hospitals around the US and the world with a 98% success rate.

"By the early 1940’s UV blood irradiation was being used in several American hospitals. Into the middle of the 1940’s, numerous reports were made about the efficacy for infections and complete safety of UV blood irradiation therapy. With the emergence of antibiotic therapy, and the billions being pushed on the medical industry to the Doctors by the pharmaceutical companies, UBI therapy was suddenly pushed aside for a more profitable form of treatment."

This IV UV light therapy was not only proven to be safe and effective it was also inexpensive but not near as convenient as popping a pill.  Now I am not saying that antibiotics are a bad thing as they have literally saved millions of people around the world from certain death caused by common bacterial viruses.  My only point to writing this is to bring light to the egregious lies, slander and complete misinformation the Media and political Left that hate President Trump put forth regarding his question to his main man at the Dept. of Homeland Security, science & tech dept.  It was a very valid question regarding a once popular method of curing people of certain diseases and known and established SCIENCE!

Now while reading this USA Today "fact-checking" article, they actually tell the truth about Trump's conversation with the undersecretary for science and technology at the UNITED STATES Department of Homeland Security and proved that only those trying to malign Trump made up this bleach lie, or maybe those that claimed he insisted people inject Bleach into their bodies are just complete MORONS and have zero knowledge of SCIENCE and how UV light works...but at the very least the article shed light on what was actually said, even though the video clip or even the transcript can be easily found.  Moreover, I am not sure why President Trump was pressured to claim he was "just kidding" about "disinfecting" the blood using UV light, because this has been a proven therapy for DECADES!  It made my heart break to hear him having to say, "I was just kidding" to pacify those who no sense or understanding of basic science!  He was right in asking Bill Bryan to continue to investigate this type of light therapy, especially considering that it was being announced that, "Cedars-Sinai-Developed ‘Healight’ Medical Device Platform Technology Being Studied as a Potential First-in-Class COVID-19 Treatment" just days earlier!   I didn't hear the Media Monsters or the Science deniers on the Left mocking Cedars-Sinai!  Did you?  Was the media mob saying that this very prestigious hospital was suggesting that people drink bleach?  Only if you are an IDIOT and have no gosh darn brain would anyone even think this!

What USA Today failed to do was to correctly fact check with intellectual honesty! President Trump posed a question as to the efficacy of IV, UV therapy in treating CV-19, nothing more, nothing less.  He claimed that it sounded, "interesting" and from what he had been told, perhaps by scientists at Cedars-Sinai, could kill viruses instantly!

"Our ruling: False" "While ultraviolet blood irradiation exists, it is unproven as an effective treatment in killing infections and is not widely used." ~~USA TODAY

Although, not widely used anymore, UV IV light therapy has been proven effective.  Moreover, the Knott-HEMO-IRRADIATOR® device has FDA approval.  And in a 1998 patent request by inventor Carl Schleicher (09/210947) approved in 2000 it is stated:
"Such treatment is intravenously applied by irradiating blood with a controlled amount of UV energy in the accepted therapeutic band. This produces a rapid detoxifying effect with subsidence of toxic symptoms. Venous oxygen is increased in patients with depressed blood oxygen values. Of special interest is that a rapid rise in resistance to acute or chronic viral and bacterial infection occurs. No harmful affects have been observed with UBI therapy in thousands of cases of viral infections, hepatitis, bacterial infections, hypoxemia and many other illnesses, especially blood-related infections."

And lastly, just as an example of the sheer ignorance and mind-blowing stupidity we are dealing with in the culture of DUMB, I just wanted to give you a prime example of a complete and total moron who has NO UNDERSTANDING of  basic science and didn't even understand that Trump was dumbing down his questions to Bill Bryan so that people like this vlogger, Sam Seder could grasp elementary science!  SUNLIGHT KILLS GERMS!  A natural disinfectant!  The sheer stupidity of this man and so many like him just makes my head throb!  And these people are now leaking our country into the dark bowels of a stinking, stagnant pool of sludge that is in desperate need of some serious disinfecting!

A Rose By Any Other Name Does NOT Smell The Same After The Dogs Pee On It!