Here are the facts regarding the shooting of 16 yr. old Ma’Khia Bryant. She was living in Foster care with her sister. WHY, is a fact we don't know yet. There were 2 calls made to the police, The first 911 call, there was a lot of commotion heard by dispatchers. “Get here now!” a female voice screams,  “We got…girls here trying to fight us, trying to stab us, trying to put her hands on our grandma. We need a police officer here now.” In the second 911 call, a different female says, “Oh never mind the police are already here. Never mind thank you.” So, who is "grandma"?  There is also some that are claiming that it was Ms. Bryant that made the first 911 call.  If so that would mean that someone was attacking her and then she took vengeance against them?  From the actual video we saw, as the fatal events unfolded it didn't appear for one second that this teens life was any way in danger.  NO, she was the aggressor.

So, the police knew, before they arrived that someone was wielding a knife and attempting to stab people...which if you know anything about self-defense that is one of the most dangerous weapons to be attacked by, actually more lethal than a gun in close proximity.  People with knives act quickly and unpredictably especially when they are agitated and already in the act of violence.  THIS IS A FACT! 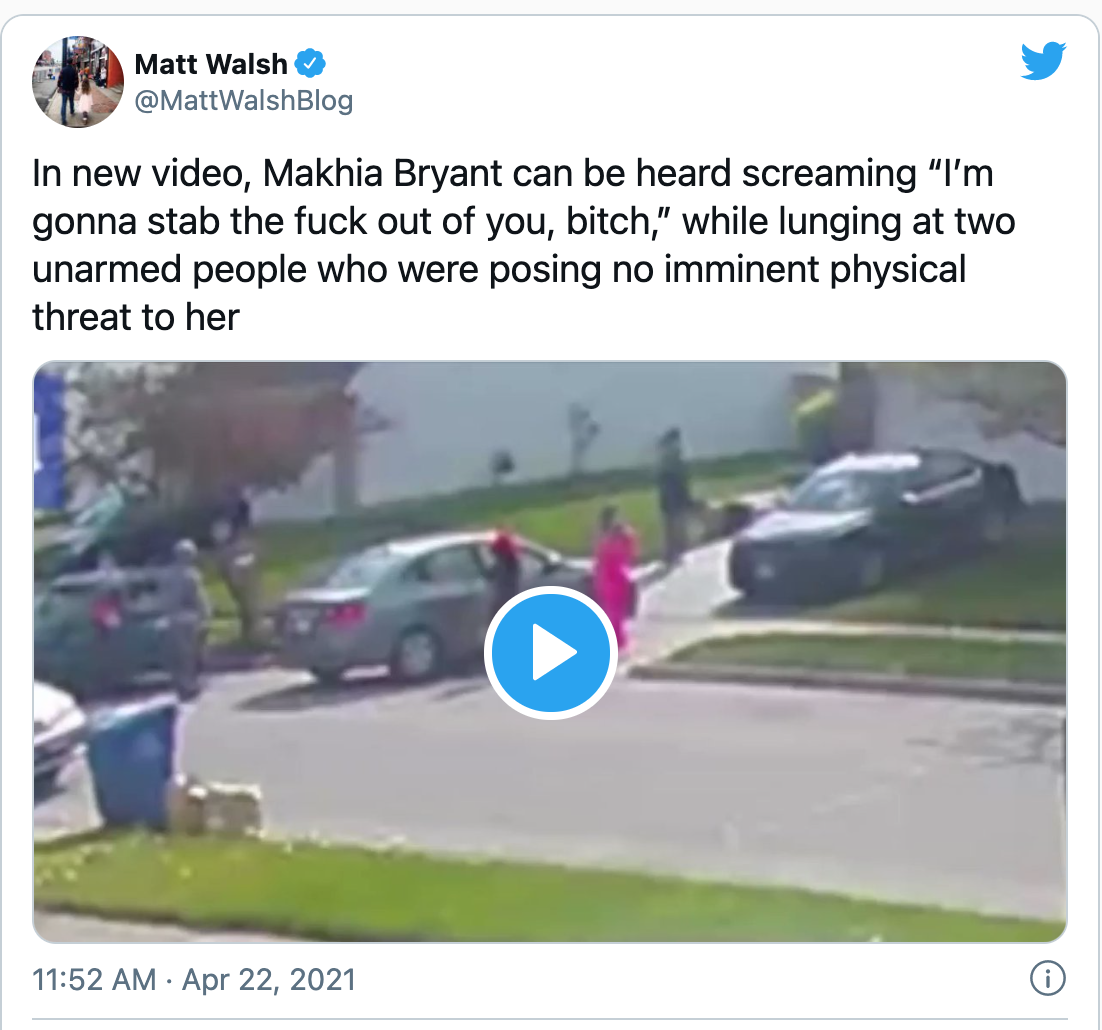 Ma’Khia Bryant threatens to stab innocent people before being shot by police.

We also know that not only is the Media spinning this race card but so is our President who is intentionally riling people up to riot and pushing a false narrative. Biden's incitement of violence, disguised as compassion is just irresponsible and needs to be called out.  We can be 100% certain though that the young woman against the car would have suffered injuries or even death had the officer not fired.  Well, why not simply tase Ms. Bryant?  The time it takes for a taser to deploy and take affect would not have stopped the downward motion of the knife she was about to plunge into the young woman pinned against the car.  So, how anyone could pull the race card is beyond me.  This was a justified shooting by this police officer and he quite possibly saved a life from a vicious, violent attacker.  Obviously this young woman was very disturbed and I am sure that we will find out more regarding the reason she was in foster care which may give clues as to why she acted so violently.  Moreover, concerning the foster case situation and "grandma" from the 911 call, we know that the foster mother, by her own admission was a work when the attempted stabbing and subsequent deadly shooting took place so she is not, "grandma."

In normal greedy form, the same as we saw with, Trayvon Martin, Micheal Brown, Breonna Taylor and George Floyd, etc. the family is coming out to condemn and cash-in on this situation...they always do.  I find it interesting in circumstances such as these, where the family is no where to be found, and in this case, the teen and her sister are in foster care, not with ANY of these relatives, but they are coming out of the woodwork to feign their love for their dead, niece, cousin, relative 3rd removed by marriage.  Where have they been during her obvious troubled life? Where were all these family members who claim to have loved their sweet, kind little boy or girl when they are down and out, doing drugs, getting arrested or out in the street at 13 shooting a gun?  They certainly were not being tucked in by their loving mom and dad!  But, you bet your life they are there now, right in the limelight, waiting for their 15 minutes of fame with their hands out for a cash settlement.  Oh, does this sound harsh?  Uncaring?  Unsympathetic?  Perhaps, but it is exactly how it appears to me in MY OPINION...how it often appears.

I am sure after all the racist, cop hating rhetoric has made us dizzy to the point of ad nauseam the actual truth will come out as far as who made the 911 call, who Grandma is, why this girl was in foster care and most importantly, why she was trying to stab these girls.  But until then, these are the facts as we know them.

REPEAT THE WORD DEMOCRACY! SAYS THE DEMOCRATIC SOCIALISTS OF AMERICA!