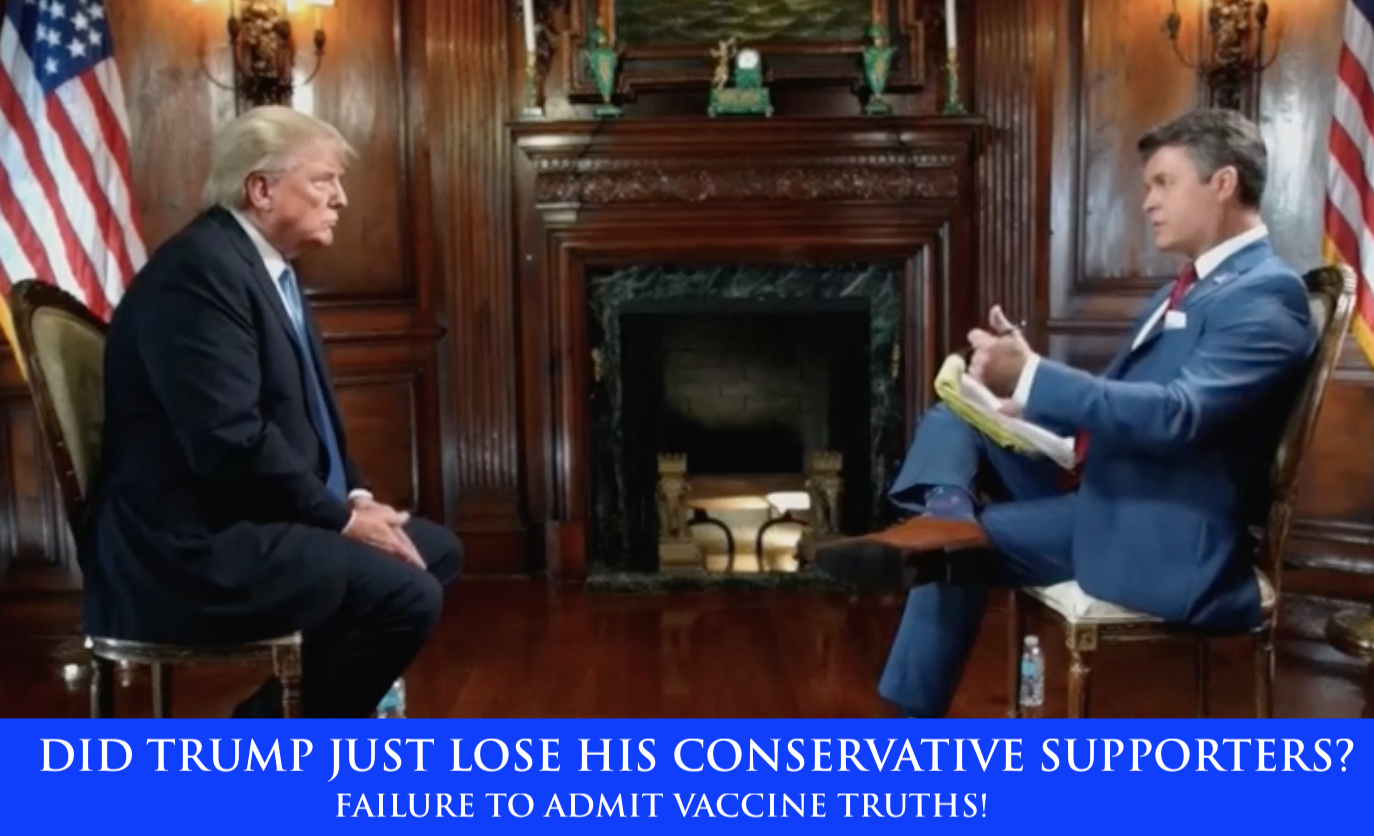 Did Trump just lose his supporters by ignoring questions about vaccine adverse reactions?

I was never, ever keen on a vaccine for COVID, especially an untried, unproven, experimental mRNA JAB.  But, at the time, when panic was gripping the souls of the world, I understood why President Trump had to leap forward in Warp Speed.  I think we all understood this as he was the President for ALL the people, not just for the conservatives and the Liberals were already swabbing up their arms with rubbing alcohol.  So it had to be done! Yeah, I get it.

But now, we know for a fact that these "vaccines" and booster, booster, booster hasn't provided the IMMUNITY it promised.  As a matter of fact they provide NO IMMUNITY AT ALL!  Bla bla bla...  Even though this fact is known to almost everyone, well except to those who, "trust the science" these under-performing "vaccines"are being pushed into arms by those with some masochistic agenda...they don't prevent infection or the spread of the virus and as the CEO of pfizer claimed have little to NO effect on Omicron.

So what does this have to do with Trump?  EVERYTHING!  Most of you know by now that I have been a staunch supporter of Trump for decades.  I have read all his books, listened to all his interviews and have had a deep appreciation for his unwavering love and dedication for this country. I firmly am convinced that he was, hands down, the best president this country has even had. That being said, I loathe the fact that he has now become a vaccine salesman, sounding like the typical liberal who is so blinded by the truth that he can't even see it.  Or maybe it is because of his superhuman ego, which I used to admire greatly in the context of confidence.

After watching Trump's interview with Dan Ball, (One American News) on Tuesday, I saw a side of Trump that aligned with the Liberal agenda as he avoided confessing the truth about the efficacy of the JAB and the overwhelming number of adverse reactions, including people dying... He didn't answer the question but talked about HIS "vaccine" status and went on to disparage "politicians" who didn't openly proclaim their personal medical decisions.  He sounded like a typical politician, worse actually.  And we all know Trump was pointing a finger at Governor Ron DeSantis who recently avoided a reporter's question on his "booster" status.  Although when pushed by Ball regarding those who haven't taken the JAB, especially young people, Trump first had to extol his experience with the SHOT, completely disregarding the hundreds of thousands of reported adverse reactions as well as the tens of thousands who have died as a result of the vaccine, pulling the benefit vs risk card, but he did change his tune when it came to children getting vaccinated.  He didn't go into much detail though as to why his son, Baron didn't get vaccinated after his COVID case...just that children have a robust immune system and don't need help from this "vaccine."

Bottom line for me

All Trump needed to say to glean support from BOTH sides was that the "vaccine" didn't live up to the expectations he was told it would.  He could have said that the "science" especially Fauci was WRONG! He should have given Dr. Malone credit for the claims he is making regarding the experimental mRNA as he was instrumental in creating it and has been warning the public of the serious dangers it poses.  Trump could have praised the very successful and loved Governor of Florida, Ron DeSantis for his CHOICE to keep his medical decisions private, but instead Trump called him, "gutless."  Really?  Because you were praising him last year for his COURAGE in keeping his state FREE!

Instead of admitting the OBVIOUS when asked, Trump turned off many of the conservatives that have supported him, and attempted to pacify the liberals with the same rhetoric we hear---GET THE VACCINE!  DON'T PAY ANY ATTENTION TO THE FACTS!  Look, I got it and I'm just fine, "no big deal."  We're so over that crap!

If Ron DeSantis runs for president in 2024, he's got my vote.  I have a feeling that Trump is doing some preemptive assault presuming the same thing, that DeSantis is going to run and therefore the Governor of Florida is his enemy and he must put him down NOW.  That was obvious from this interview.