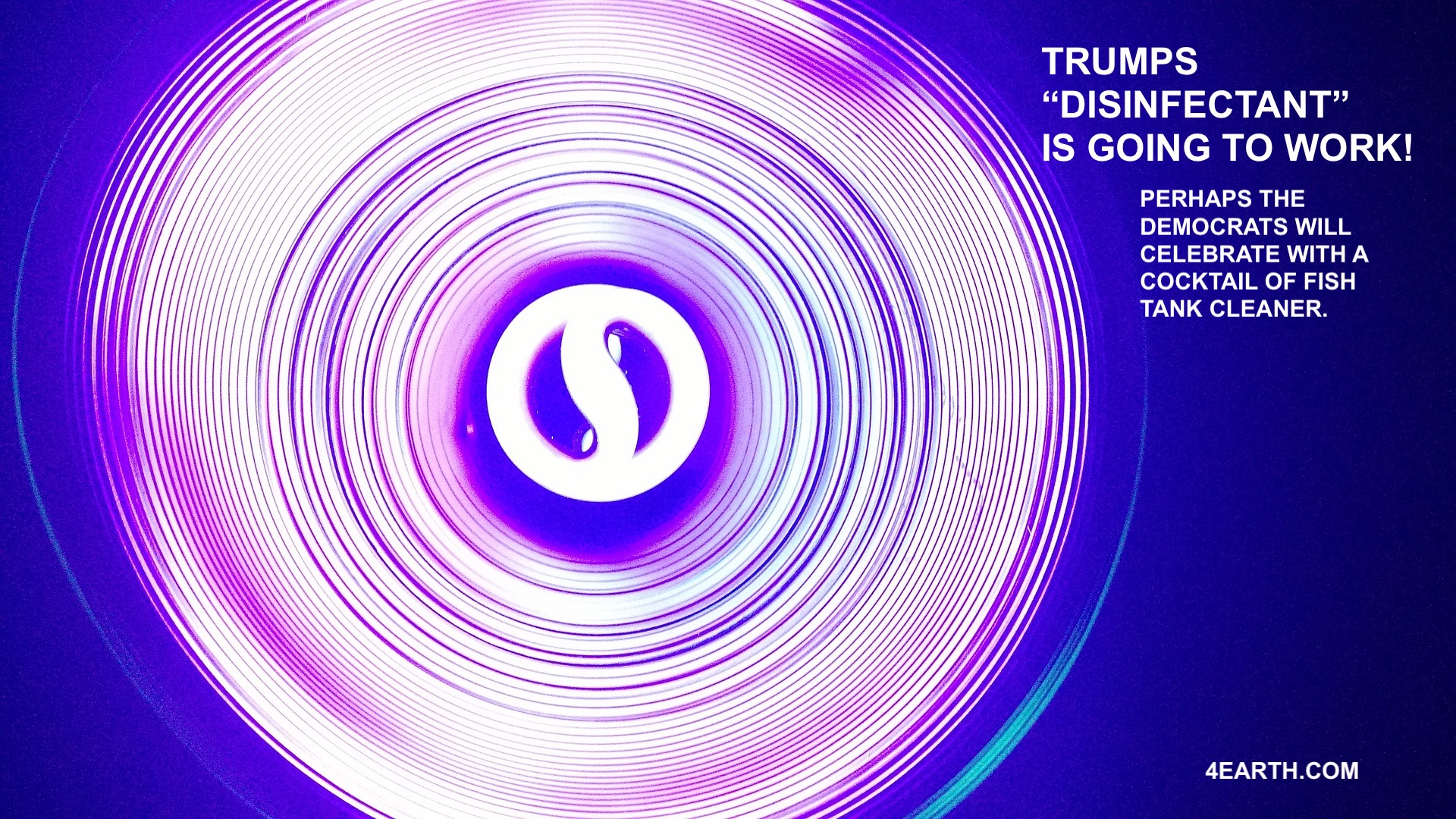 On April 23rd, 2020, President Trump, after listening to a presentation from Bill Bryan (Dept. of Homeland Security) discussing using UV light therapy to kill the Chinese Flu, Trump took to the mic and reiterated what Byan has just said regarding the use of UV light to eradicate this virus. Trump states, “supposing you can bring the light into the body, which you can do, either through the skin or in some other way…and I see the disinfectant, where I see it knocks it out in a minute, one minute.” He then turns to Bill Bryan and asks, “Is there a way we can do that? Like an injection inside, almost like a cleaning? Because you see it gets in the lungs and does a tremendous number on the lungs. So it will be interesting to check that and you will have to use medical doctors, but it sounds interesting to me.”

Ultraviolet (UV) light has a long-standing track record in use as an antimicrobial. Guess what, a “Disinfectant” is an antimicrobial! So Trump was not wrong! What was wrong, VERY WRONG is what the media did to mock him claiming he was insinuating that people drink “bleach!” What he was really doing was sharing with the American people something that Bill Byran, Under Secretary of Science and Technology Directorate a component of the US Homeland Security was informing him of–UV LIGHT THERAPY! But the media who thinks American’s are simply idiots had to disrespect and openly mock our President and also the American people.

“A group of researchers at the Cedars-Sinai Medical Center in Los Angeles, Calif., known as the Medically Associated Science and Technology (MAST) team, has been investigating the potential application of the safest type of UV light within the body for years, particularly in gastrointestinal and genitourinary indications…

How it could work

“The Healight device for COVID-19 is being developed for use by insertion via the existing intubation in a mechanically ventilated patient. A catheter would be placed into the upper respiratory tract for routine treatments to kill the virus, as well as any other microbes such as those involved in pneumonia, in the surrounding cells. The hope is that this could aid the activity of the patient’s own immune system.”

“Preliminary data has demonstrated coronavirus killing. The coronavirus resides in human tissues, specifically in the trachea and all the way down into the lungs,” said Disbrow. “It is thought to primarily reside in the upper airway, where if you can kill it early and kill it within the cells while preserving the healthy cells, that would be the golden ticket. The idea is that we would get this down the trachea, where the coronavirus is going to primarily reside, and then you have a chance to improve outcomes by reducing the viral load.” Bioworld.com

So basically, injecting UV rays INTO THE BODY to kill all sorts of viruses including THE CHINESES FLU! The Democrats and the Media Mobsters have zero shame! And not only that, but they actually believe that you are so stupid as to actually believe that Trump suggested injecting bleach into your body. Although, after watching this video, I am beginning to wonder if the majority of Americans perhaps are THAT STUPID! I find the comments in this video hard to believe, like perhaps…Intentional Disinformation? Propaganda? I also find it sad that Trump has to defend what he said as a, “sarcastic comment” because he WAS RIGHT, UV lights do disinfect! Even the word he used, “disinfect” was the correct word.

“The MTA is rolling out a new weapon in its battle to keep the city’s buses and trains clean during the COVID-19 pandemic — coronavirus-killing ultraviolet lamps.

“These UV lights that we have on site today efficiently kill the virus that causes COVID-19,” Foye said before a demo at the Corona yard in Queens.” IMAGINE THAT!

So, as always, when I am researching to write these commentaries, I tend to stumble upon something fantastic! And as much as I derail from my objective at times, these findings are too good to not include…so I must!

Ultraviolet Irradiation of Blood: “The Cure That Time Forgot”?

“Ultraviolet blood irradiation (UBI) was extensively used in the 1940s and 1950s to treat many diseases including septicemia, pneumonia, tuberculosis, arthritis, asthma and even poliomyelitis. The early studies were carried out by several physicians in USA and published in the American Journal of Surgery. However with the development of antibiotics, UBI use declined and it has now been called “the cure that time forgot.” WHAT THE HECK IS THIS? My logical side says, “save this for another article…” But my impulsive side is screaming…”DON’T STOP NOW!”

But, WOW, there is just so much here about this UBI and I want you to understand the point I am trying to make here…the reason I am writing this. Trump had it right and the media mobsters and the Democrats had NO RIGHT to mock Trump and to propagate lies and push their propaganda to make our President appear foolish. You would have thought they learned their lesson with the Fish Tank cleaner hoax they tried to push…Hydrochloriquine is WORKING to cure THE COVID! Again, Trump was right.

HYDROXYCHLOROQUINE IS CHEAP. VACCINES MAKE BILLIONS! PEOPLE SHOULD DIE SO A PROFITABLE VACCINE CAN BE MADE!

A PROTEST BY ANY OTHER NAME IS THE SAME…BLM, ANTIFA, CHAZ BUT NOT A PATRIOT!