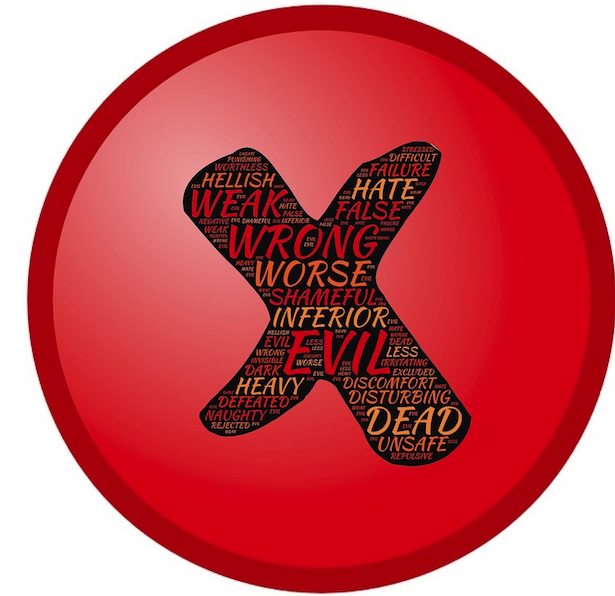 My husband and I were at Winco today…standing in the check-out line. The guy in front of me and I were joking about the stupidity of THE COVID HYSTERIA.  We were number 3 & 4 respectively in line and noticed how well behaved the guy in front of us was.  He was standing on his X, approximately 10′ from the conveyer belt.  The man checking out had his entire amount of groceries well past the acceptable (in normal life) space where one would throw down that thin plastic separator.  But this guy stood his ground, on his red X, and waited for the checker to tell him it was, OK to start adding his groceries to the conveyer belt. While waiting we were making small talk with the guy in front of us…COVID jokes, sharing irritations, talking about stupid people, you know, normal stuff.  I told him that I was going to get all up in his grill at the check-out and I was going to allow my stuff to touch his stuff.  I laughed, he laughed, my husband laughed, the checker who overheard us didn’t laugh. Then the man said, very seriously, “I can’t wait for this stupid thing to be over!”  I looked at him and said, “IT WON’T BE OVER UNTIL PEOPLE STOP STANDING ON THEIR X!”

Here is a protest we should all get behind and it is easy AND peaceful!  Just say no to the X!  Ok, Ok, I do realize that there is a great deal of Covinoia going around and I am also aware that this is a virus, very much like the seasonal flu in its attributes and ability to infect…it spreads exactly the same way the seasonal flu spreads.  This virus, unlike the seasonal flu, seems to prefer older folks and those with preexisting conditions.  However, the biggest problem we are seeing is that the data and information we had at the beginning of the pandemic was that THE COVID was going to be a KILLER.  We simply didn’t know and consequently, vast assumptions were made using half-vast data.  We know differently now and we know that this virus is not the venomous killer slithering silently around sinking its fangs into the entire population with the intent to kill.

And now, several months into this hostage situation with some of our privileges being restored, we all knew that it was just a matter of time before state Governors SPIKED the ball.  I think we were all waiting for it...  Around phase 3-4 and in some places 2, we saw the protests, the riots, the looters all over this country which coincidentally corresponded with an exponential COVID testing protocol.  People are getting tested left and right and not those who have symptoms, but mostly just those thrill seekers who get off on having their brain tickled by a 6 foot swab going up their nose--“nasal turbinate swab test,”!  We have all been convinced to believe that these tests are 100% accurate even though there have been hundreds if not thousands of false Neg. AND false Pos. results and really, no one can keep track of the FALSE results.  That being said, the simple fact that the media is reporting, in their general fearmonger manner the THOUSANDS OF NEW COVID CASES each day...we must stop for a moment and take a think break.  How many people would test Positive for the Seasonal Flu if the testing was as aggressive as the COVID?  Why aren't the media monsters reporting on all the people who have allegedly tested positive who ARE NOT SICK?  According to the CDC as of June 24th, 2020, "Most people have mild illness and can recover at home without medical care."  MOST PEOPLE?  MOST PEOPLE!!!!!!  Really, this KILLER SNAKE!  This virus that has had us in lockdown, destroying our economy, bankrupting business, and mandatory mask wearing for a VIRUS that causes a "MILD ILLNESS?"

So, I am 99.9% positive that in December 2019 I had this virus as I am sure so many also did this winter, as a matter of fact I think that a vast majority of our little town had it.  My daughter who lives in Hawaii was telling me the her entire island had this horrible respiratory sickness last winter, most thought it was the seasonal flu and seeing that all of Hawaii is a tourist town, the show must go on, sick or not...so what could this mean for the "SPIKE" in new cases as testing has ramped up to hundreds of thousands of tests a day?

POSITIVE TEST RESULTS FOR WEEKS IF NOT MONTHS AFTER INFECTION IS GONE!

"But why does a nasal swab still find signs of the coronavirus weeks or months after Joyce and some patients have recovered? As Shenoy explains, the test looks for genetic material that signals the presence of the virus. 'It doesn’t tell you if it’s alive,' she says. So just because you identify virus through this test does not mean that the person is infectious and capable of spreading disease to others. The growing body of research that shows a positive test result does not mean someone is contagious may be difficult for employers, school administrators and summer camp directors who have suggested using diagnostic tests to decide who is safe to be near and who isn’t. Ellison says mass testing may lead to a lot of unnecessary tests and headaches."  Dr. Erica Shenoy, associate chief of infection control at Massachusetts General Hospital.

Why isn't THIS fact being reported?  How many people are testing positive that have already had THE COVID?   But wait there's more!  Dr. Abraar Karan, a physician at Harvard Medical School states, "A positive result could also mean you were sick weeks earlier, fully recovered and are not infectious. The PCR test has sometimes shown positive results weeks after someone recovers. The test could be detecting RNA [of the virus] even in people who are recovered — but that doesn't mean that they're infectious."  And remember, if one such person dies and they have a positive test, they will be counted as a COVID death...well except for George Floyd, they couldn't pull that one off.

What about a negative test result?  I mean, we've been told that these tests are 98% accurate, or some other number made up on the spot. "We don't know how good these tests are in individuals who don't have symptoms. We know they're pretty good at picking up COVID when it's present in people who have symptoms. But we have no idea what a negative test means in an individual that doesn't have symptoms." Dr. Emily Landon, a hospital epidemiologist and infectious diseases specialist at University of Chicago Medicine.  WAIT A MINUTE!  So was this written back in March when no one really knew anything?  Nope, Dr. Landon confesses, May 31, 2020 that they (the medical community) have "NO IDEA what a negative test means in an individual that doesn't have symptoms."  It would be my sarcastic answer to say, "Looks like they ain't got THE COVID now don't it!"  But THIS where the rub comes in: "We are certain that there are people who test negative even though they are definitely contagious, a positive test can make us relatively certain that you are shedding COVID. But a negative test does not mean the opposite. It could be that you were tested too early in the disease process or that the swab didn't pick up your infection."  ~Dr. Landon  So just read this entire paragraph again...slowly.  And this is the problem!  Doublespeak!

If the CDC, you know, the guys that are directing our lives these day, state that MOST PEOPLE who contract THE COVID will have a mild case, then why. WHY all this BullChit?  Why isn't it being reported that a person can test positive for weeks or even months?   For example, the coroner's report for George Floyd, "Signed by Dr. Andrew M. Baker, it says Floyd had tested positive for the novel coronavirus on April 3. A post-mortem nasal swab confirmed that diagnosis. The report notes that because a positive result for coronavirus can persist for weeks after the disease has resolved, 'the result most likely reflects asymptomatic but persistent ... positivity from previous infection.'"  So, we are just assuming that he was "asymptomatic" and that darn positive was persistent. He didn't seem like the kind of guy to go get his brain jammed with a swab for kicks, unless he was high out of his mind...there is that, but chances are he was sick, with symptoms.  One would think that would have been investigated and reported.  But gee, thank you CNN for pointing out the blatantly OBVIOUS!  Now how about you start pointing out all the other people who tested positive but died in a car accident and are reported as a COVID DEATH!  Yeah, we'd all appreciate a some truth reporting coming from the mouth part of your faces!

Ok, yes there is a point to my ramblings...if we want this to end, we need start to think.  We MUST cohesively see the all the contradictions regarding THE COVID and they are right there, right in front of our face.  I watched as our little town stood up to the prospect of ANTIFA invading us, 1000+ strong in numbers and then to see everyone slink back into their mask wearing, stand on their X, state of covinoia. It behoves me to do something or at least persuade you to STOP!  Really, just STOP standing on the red X at the store.  Cross that blue line, burn your mask!  If we all do it, I think that is called a protest!   Let this virus run its course, if we don't achieve herd immunity the State Governments and the CDC will run and ruin our lives for the foreseeable future.  Why would we allow a "mild illness" to destroy our country and our lives?  The seasonal flu is generally NOT mild, TENS OF THOUSANDS of people die EACH year and hundreds of MILLIONS of the US population get infected and almost every year this is a PANDEMIC!  We don't wear masks or stand on our X at the store.  Most of us take precautions and pray we don't get sick and if we do, we whine and moan and tell all our facebook friends how crappy we feel and complain that the cough lasts weeks and weeks...but we DON'T surrender our lives to the government! So let's just STOP DOING IT NOW!

Remember, PROTESTING is GOOD, well at least that is what we are constantly hearing as we watch our history being destroyed by masked enemies.  We might even be called "heroes!"  We could actually TAKE-OVER our own communities and call them a "No COVID Zones!"  We just need to start thinking...and stop standing on the X.

So, if I don't write you something tomorrow or the next day, know that the BIG BLACK VAN came to get me to shut me up. Someone better come break me out!  All joking aside, I am serious about that.