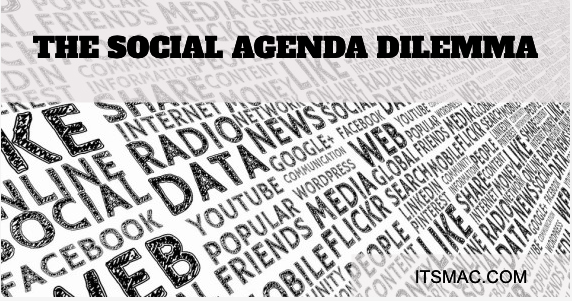 Netflix Docudrama The Social Dilemma pushes Social Agenda without anyone even seeing it.

So I had to take some time to see what all the buzz was about regarding the Netflix new Docudrama called , The Social Dilemma.

It did an excellent job of peeling back that onion and exposing the addictions that these Social media giants have purposely created, and how these platforms have taken over the minds and souls of so many people, right down to how they did it.  That was awesome and should scare the crap out of anyone who was paying attention, especially if you have children.

It didn't however, mention, as one of its great sins,  was their ability to wield their authoritarian power to silence free speech of those who don't agree with their agendas...and if you paid attention they were dedicated to discrediting conservatives starting with the obvious conspiracy being the "flat earth" notion, which does embarrass most of us.  They spent quite a bit of time on that absurd theory, which even the most hardcore conservative thinks is simply ridiculous...but then, once they had that conspiracy planted firmly in my brain and how people have used social media to share ideas on that concept, they moved on to real issues of child trafficking (Pizzagate), anti-vaccers, climate change deniers, showing those who believed in these 'theories" as puppets who propagate falsehoods because they are being led by some AI.  These people speaking suggested that those opinions are all conspiracies and simply just as absurd as that tiny group that believes the Earth is flat!  It was a complete mental setup.  How could it not be when these young people were telling us, POINT-BLANK how the artificial intelligence they created works to persuade, and the algorithms used to move the user where they want and and how they can easily control the minds of people...they made sure that you completely understood the evils that they had created and the immense control these platforms have on us, BEFORE they started to slip in their liberal bias.  They had to set the hook first.

And if you paid really close attention, the teenage boy (Ben) who is the center of this docudrama is sitting at the dining table in the beginning, when the father throws out a political topic (extreme center "wackos") and every one at the table, except the son, groan.  Now, this was so brief, and they quickly moved on to another topic, but the rest of the show, revolves around the boy supposedly following ALT-Right groups who are brainwashing him as he blindly gets led to a riot where he ultimately gets arrested. The interesting ideology I found represented here was that without their Social Media addiction available they had nothing to talk about at the table, but when the father suggests a conversation regarding the political issue he faced that day, he was immediately shut down, except for the boy, he wanted to know.  It was as if the producers of this show were claiming that discussing politics with your children is just as evil as the social media brainwashing. Perhaps this comment will cause some to look up--"extreme center."

In the first 5 minutes they showed a 2 second clip of ISIS Terrorists and then a clip comparing them to White Supremacists, and in a few more seconds a clip of Conservative Patriots at a courthouse steps holding American flags with signs that say, "Live Free or Die."  And then they slip in a video clip of a black woman claiming that our "Democracy is under assault."   The majority of Liberals would immediately know that this is Susan Rice, Obama's National Security advisor and those who regularly watch the news would remember that this interview revolved around Rice ranting about Trump and defending Joe Biden regarding his dirty deeds in Ukraine and in China.  "Our Democracy is under assault" was her Liberal attempt to discredit President Trump from investigating Joe Biden.  The producers of this show twisted the truth in what that clip was all about. There were so many subliminal and also, oh so obvious hacks on the conservative population under the guise of exposing the evils and controlling aspects Social media has on society. 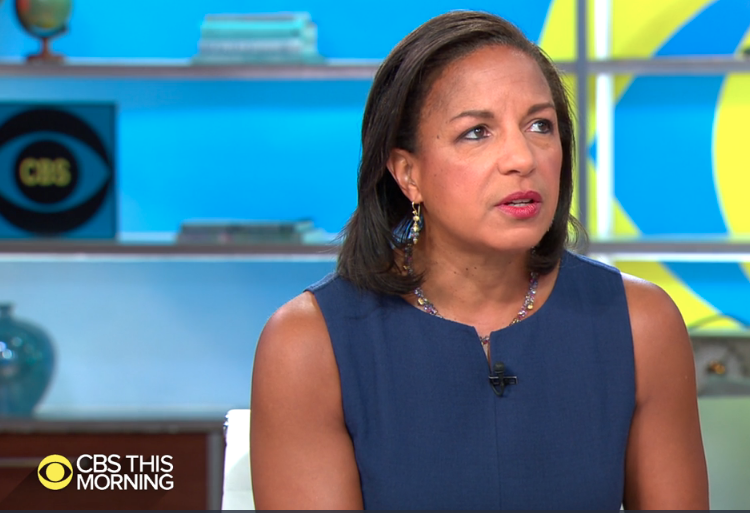 Rusan Rice ranting about President Trump claiming our "democracy is under assault."

These were all so subtle in contrast to the real message this show was attempting to expose, but they were also blatant in their bias, never showing how these platforms have incited Liberals to riot, never exposing how the ALT-Left has control over the minds of these millennials and Gen-Xers with the birth of ANTIFA or BLM...not even a mention of those terror groups and how social media is the evil genius in arranging and organizing and even funding these groups...no clip of George Soros.  No, none of that, they focused their secondary plot on conservative, conspiracy theories...the entire time.

There is a point in this show where Ben is sitting on the stairs listening to an obvious conservative "news" vlogger.  How can I say that?  Well, if you actually had the focus to see what was being viewed, it was of a man talking about what our children are being taught in school...this is a HUGE concern for the Conservatives.  "The only reason that teachers are teaching this stuff is because they are getting paid to."  And then the sister chimes in,  without hesitation claims that what her brother is watching is NOT news but propaganda and with utter concern tells her brother that what is he watching is, "bad for you."  And then one of the Social media speakers states, "The algorithm is actually trying to find a few rabbit holes that are very powerful..." They break to the other Social media creator, Tristan who goes right into the story of the "famous basketball player, Kyrie Irving...believed the earth was flat...and apologize later..."  This was blamed, on him following a rabbit hole.  There was no assigned personal critical thought discussed, just showing a teenager watching a conservative vlogger talking about what kids are being taught in school and jumping RIGHT TO THE CENTER OF THE FLAT EARTH, using a "famous basketball player" as the tipping point.

What they are not so subtly saying is that alternative news, conservative ideologies, like Pizzagate, Joe Biden's corruption, the Russia Hoax, Liberal indoctrination of our children, are just absurd ideas and rank right up there with the handful of people who believe the earth is flat!

Calling conservative news, "bad for you."

If you really paid attention, beyond the horrific confessions of these Social Engineers that worked to create these Media Monster platforms, you would have seen the other agenda being ultimately pushed in this Docudrama.   Take the comments from Renee Diresta, "Data for Democracy, former Head of Policy" who starts out discussing Pizzagate and how she has no idea how people could even believe this idea that pizza was a cover for child trafficking.  She then goes on to explain  how facebook actually encouraged these people to see more about Pizzagate and also encouraged Facebook users who are, "anti-vaccine or believed in chemtrails" to join groups to further their crazy conspiracy theories.  But nothing about how Facebook and other social media giants ban, delete and silence these conservative opinions...no siree Bob, they simply imply with uncomfortable laughs, and long pauses how, "wacko" these conservatives are and they are supposedly encouraged by the Progressive, Liberal Social Media Platforms.  And I don't doubt that one bit, except they encourage only long enough to pinpoint who these people are and what they are talking about before they are SILENCED.  This is the truth they are NOT telling you about in this Docudrama.  Conspiracy thinking?  If you asked a Liberal they would say, "HELL YES!" 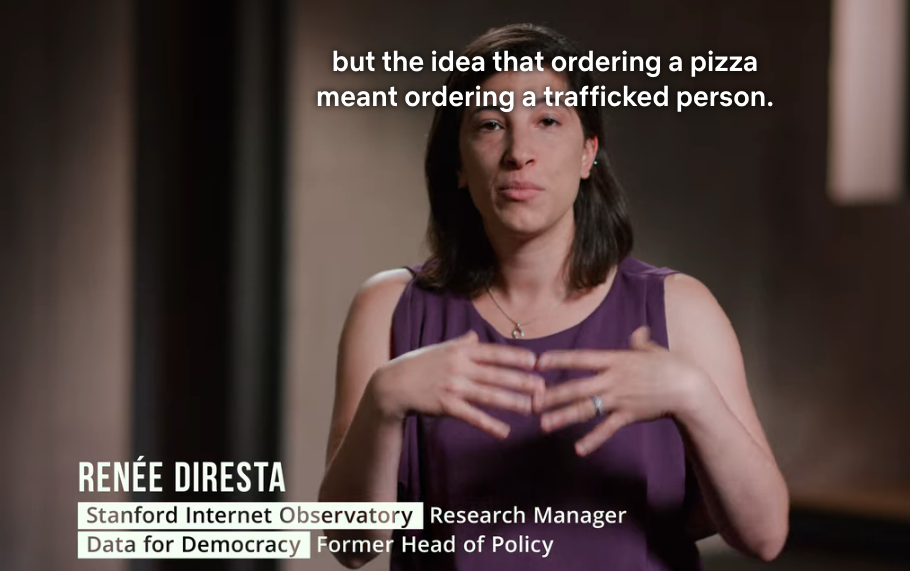 How could people connect pizza with child trafficking?

Anti-vaccine people and those who believe in Chemtrails. 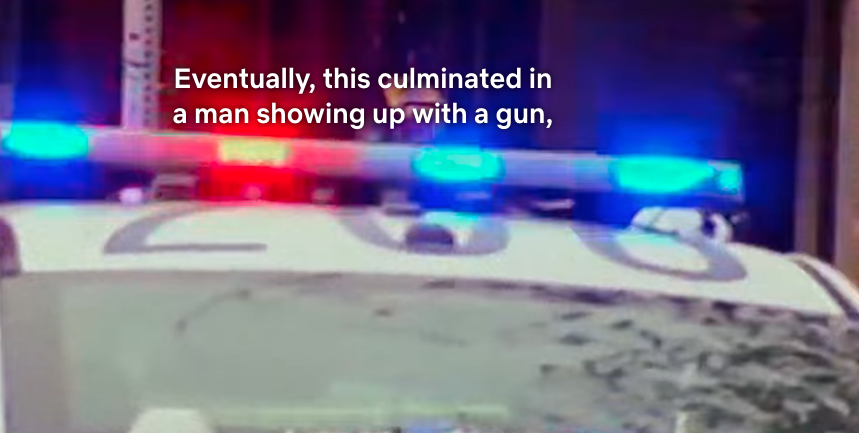 Right wing man shows up with gun to save children...pizzagate

This Docudrama should have been called, THE SOCIAL AGENDA because as frightening as the subject matter was regarding how the Social Media Giants OWN OUR SOULS, the secondary plot was aimed directly at discrediting Conservatives and their views!  There was absolutely nothing pointing out how Facebook, Google, Youtube, Instagram and the like, have been so instrumental in creating terror groups like ANTIFA, the BLM movement, inciting riots and encouraging violence.  There was ZERO discussion on how the media monsters SILENCE the conservative viewpoint, which is a HUGE issue!  It you paid attention through all the digital era, fear-mongering, which was 100% true, and focused on the group they targeted, Conservative Americans as being the ones influenced and led to believe lies and being the ones who are making up all these ridiculous "conspiracy theories"...  Even USING a Progressive, Liberal politician from the Obama era, misrepresenting what she was actually discussing--pushing Biden's innocence and trashing President Trump, "An assault on our Democracy!"  If you watched this carefully, the point they were trying to drive home and the agenda behind that purpose was accomplished, as I have not heard anyone discuss the reality of what this program was really attempting to persuade us to do. It was not simply to get off Social media or to expose their sins, their evil intent...it was, in a psychological manner, meant to portray the Conservatives as conspiracy nutjobs, that alternative or conservative news people such as Tucker Carlson (shown at the beginning), conservative vloggers, those who are anti-vaccers, individuals who believe our children are being indoctrinated in schools, people who are concerned with child trafficking, chemtrails in the sky and believe that we should discuss things like religion and politics with our children are people to be mocked and disregarded and most importantly, SILENCED!

BIDEN IS A PAWN! THE DEMOCRATS WANT TO BURN DOWN REPUBLICANS UNTIL THERE ARE NO SURVIVORS!