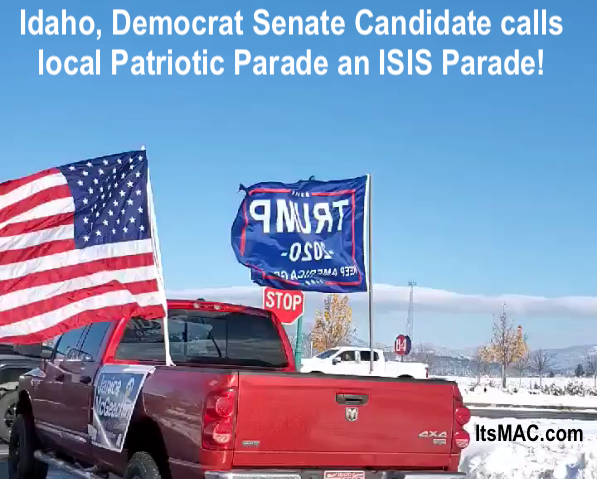 "Be fruitful and subdue the lands..."  THIS has been the Liberal agenda for decades.  Breed Left Wing Radicals and send them out to infiltrate small town America...that is the agenda.  Take my little town for instance, Coeur d'Alene, Idaho.  I write about our village frequently as it exemplifies what one would think of when they imagine a God fearing, Constitution loving, tight knit community that also happens to a be a tourist town, a destination attraction for all types of people.  And the core, the seeds of this town have been conservative...until recently. The apple has been bitten.

Nothing that we have experienced has brought to light the amount of Liberal thinkers (I know-oxymoron) than this virus has.  We have always been such a cohesive town with Conservative and Liberals living in peace and enjoying every wonder this beautiful area has to offer us.  Always, until 2020!  Now, we see clearly the riff and agenda of the Left that feel, NOW IS THE TIME to TAKE OVER!   Unknown to many who voted, our Governor is a RINO and has used this plandemic crisis to court and jump into bed with an many Liberals as possible, breeding even more Progressives, propagating our state to shift to the Left.  This has become clearly evident in the political plays we are all currently witnessing.

Nothing I have heard coming out of the mouth part of a Democrat's face was more concerning than this statement made by a local Democrat Candidate, Shari Williams, regarding one of our latest Vehicle Patriotic Parades, supporting our country and our President.  She is a self-proclaimed, WRITE-IN,  Idaho State Senate District 4 candidate.  Now the comment you are about to read come on the heels of an unpopular mask mandate that was thrust upon the good citizens of Kootenai County by our local Health District this summer and rescinded just a few days ago.  But then, like clockwork (orange) our city council calls for an emergency meeting to reinstate the mask mandate!  We have allowed Progressive, Liberals into our local Government who are hell bent on politicizing this virus by any means necessary and encouraging and inciting great discord and division in our community.  FINE AND ARREST THOSE WHO WON'T COMPLY!  SHUT DOWN BUSINESS IF THEY DON'T COMPLY! 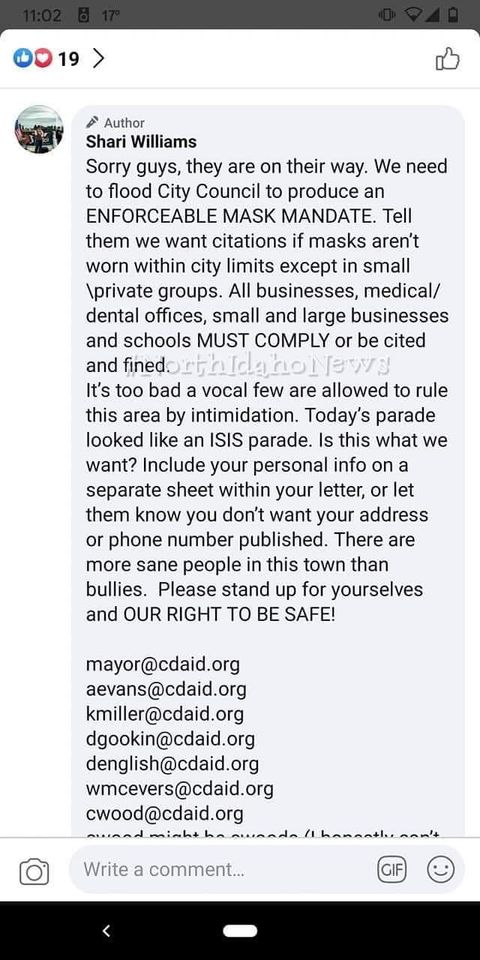 "Sorry guys, they are on their way. We need to flood City Council to produce an ENFORCEABLE MASK MANDATE. Tell them we want citations if masks aren’t worn within city limits except in small \private groups. All businesses, medical/dental offices, small and large businesses and schools MUST COMPLY or be cited and fined. It’s too bad a vocal few are allowed to rule this area by intimidation. Today’s parade looked like an ISIS parade. Is this what we want? Include your personal info on a separate sheet within your letter, or let them know you don’t want your address or phone number published. There are more sane people in this town than bullies. Please stand up for yourselves and OUR RIGHT TO BE SAFE!"

This comment not only infuriates me, but truly scares me for the future of our conservative ideologies. "It’s too bad a vocal few are allowed to rule this area by intimidation. Today’s parade looked like an ISIS parade."  This is the type of LIE that the Left tries to push.  Coeur d'Alene is populated with patriotism and we are certainly NOT the few, we are the MAJORITY!  And to suggest that the hundreds of citizens that participated in the this patriotic procession, with vehicles decorated with flags, Trump signs, red, white and blue decorations, filled with happy, honking, smiling people could be compared to an "ISIS PARADE" is extremely worrisome to me!  But clearly demonstrates the depth of HATE the left has for this country!  Comparing support of our nation and our President, of your friends, neighbors and community members...at least 500 people in roughly 250 vehicles, to a terrorist group that murdered 1000's of people?  COME ON MAN how much more hateful and divisive could you possibly be? 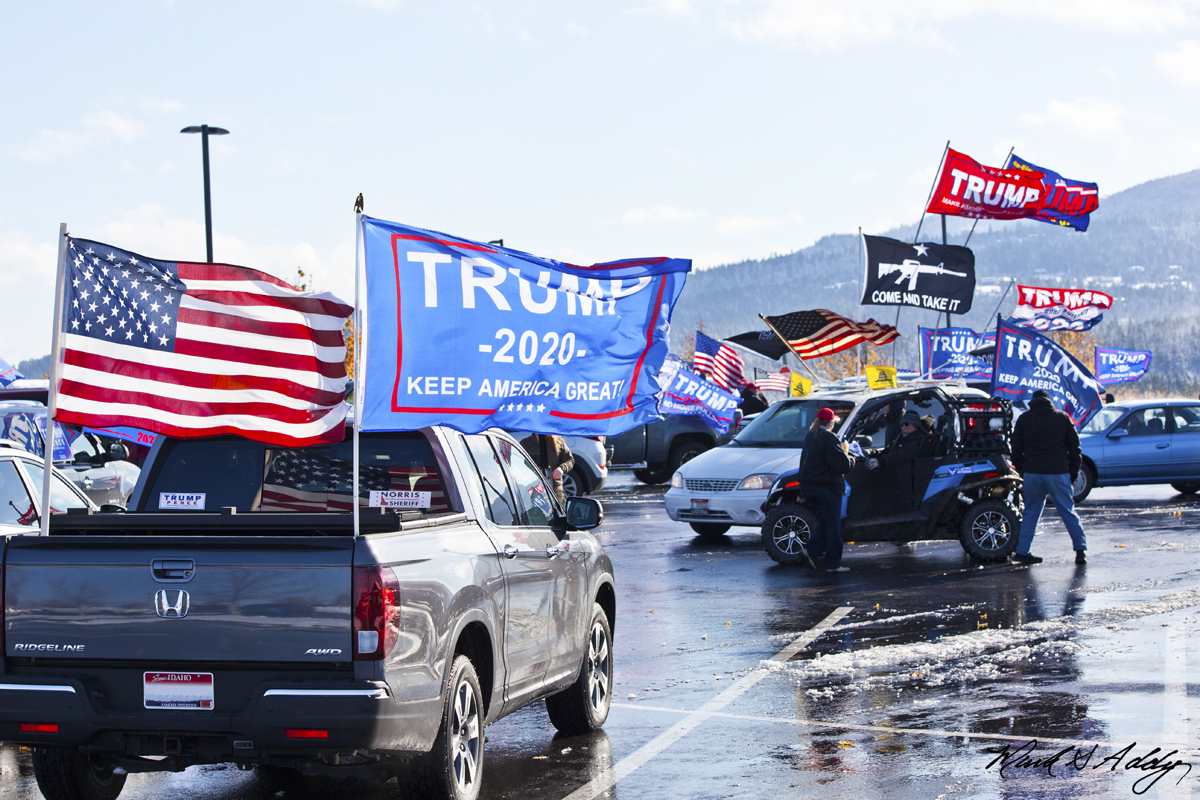 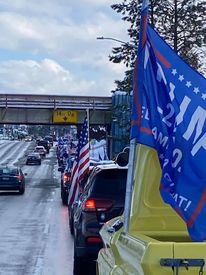 A couple hundred vehicles lined the road from Post Falls, Idaho heading to Coeur d'Alene, showing support for our country and our President.  And yet, this is offensive to the Liberal left. So much so that it was stated by a "write-in" Democrat Senate candidate, that this show of United States Patriotism was akin to ISIS terrorists!  What would she say about our Fourth of July Parade? 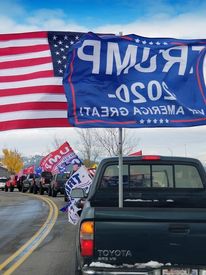 PATRIOTISM is "INTIMIDATION" to the Left!

As we see with the Marxist/Communist comments by Shari Williams, obviously someone who deeply desires to cut off our oxygen and turn us BLUE...a California transplant who plainly espouses her hatred for our flag, our country and the OVERWHELMING number of conservatives and patriots who live in this community, by calling us a "vocal few" and stating that by showing our love for our country equals "INTIMIDATION"?  Or even worse, TERRORISM!  This, right here is how those on the left feel!  "Is that what we want?"  Is this what our beloved city is becoming? Does Shari WIlliams really believe that we are a "vocal few?"

If the passing, just minutes ago, of a city wide mask mandate is any indication of how the Liberal Left has infiltrated our local government, we are all in serious jeopardy of losing anything that resembled our little conservative, freedom loving town. 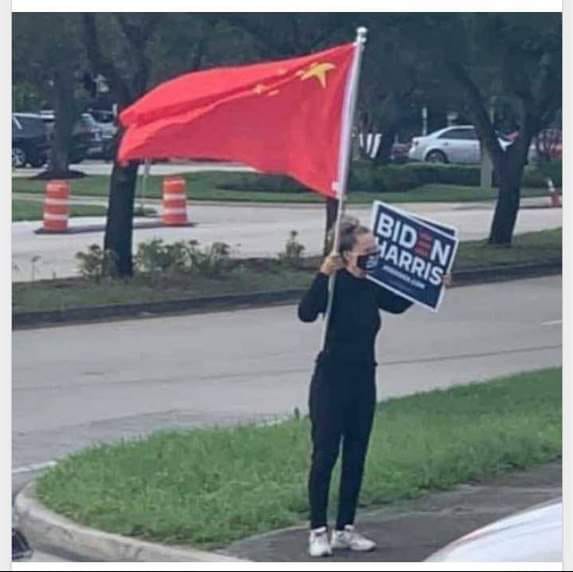 Coming to a young, useful idiot near you!

We are NOT the vocal few--that would be the Liberals in our community!  We are the silent majority that MUST START SPEAKING OUT NOW! BEFORE IT IS TOO LATE!

A TALE OF TWO CITIES–COEUR D’ALENE, ID VS SEATTLE WA.