I am hoping that this will be the last entry regarding the events our town, Coeur d'Alene, Idaho experienced June 1st-5th.  I MUST write this however to PROVE that there is a very odious double standard when it comes to our First Amendment and the Conservative's ability to disagree...to even be able to voice their opinion without backlash, being called a racist, an instigator or an agitator.  I mean really, we all can't claim that if we had a son his name would be, Trayvon!  Talk about instigating!  And man, didn't that comment, heard around the world, forever change the narrative and start a political movement.  The truth didn't matter, all that mattered was the narrative and when it came from the mouth of President Obama, the Media Monsters gobbled it up.  "Hands up...Don't shoot" took on a life of its own.  The truth couldn't be told by eyewitnesses, cause snitches get stitches.  But the TRUTH is all the MATTERS! Right?  We all remember that punk kid, Nick Sandmann, who blatantly, full of racism and hate was taunting and heckling a poor, old, ex-military vet, Native American man.  Oh wait, that's not the TRUTH, is it?  But remember what the Media did to this kid and not just the media but also Democrat Politicians!  See what I am getting at here?  Good, innocent people can have their names destroyed, their lives destroyed, all because of racial politics and a narrative that must be met.  And that narrative and that agenda must be pushed and pushed hard and it really doesn't matter whose lives are impacted.  Because the TRUTH doesn't matter in politics only the outcome of the agenda.

Which brings me to the reason I am compelled to write this.  I have a very good friend named Robert (Bob) Dorn and he lives a stone's throw from me.  He is one of the nicest men I know.  At almost 80 years old Bob is so full of life so kind and generous. There is not a single person in this town that he wouldn't extend the hand of friendship to.  A California transplant, Bob fits our community like a glove...a glove that actually fits.  A former professional baseball player, history teacher, mentor and UGE Trump supporter!  So much so that he last year he spray painted the name TRUMP in blue on his red truck.  I remember telling him that there is SO MUCH HATE for Trump, even in our little town that is car is going to get trashed.  His response, with his irresistible laugh and beaming smile, "You have no idea how many good conversations I have been able to have BECAUSE of my TRUMP Tag on my truck...even from Trump haters."   So that's my neighbor Bob, in a nutshell.  The old man who doesn't realize he is old, who wears his Trump hat everywhere, in airports, on planes, all the time when commuting back and forth from California.  We are constantly worried for his life and tell him regularly that he is going to meet up with the wrong crowd one day and get beat up or even killed.  He just laughs and says, when it's his time, it's his time and he will continue to support HIS President.

You all know by now what happened in our town on June 1st. (Coeur d'Alene Stands Up--ANTIFA Stands Down).  It wasn't however just one day.  We had protests for several days and on June 2nd Bob went  driving down our main street, Sherman Ave. to see what was going on, just like most of us locals did.  As he was driving down Sherman Ave. there were many protestors on the sidewalks and as Bob's, Trump tagged truck drove by, a group of protestors heckled him saying--"TRUMP SUCKS!, F-TRUMP, F-YOU"  Now this is not hard to believe as these protesters are no friend of Trump and I can imagine there were more insults cast at Bob, but good thing he is hard of hearing.  Now Bob could have done one of two things, he could have just let that HATE SPEECH slide off his back and kept his mouth shut OR he could have responded with a, "ya'll suck" and a peaceful bird.  He chose that latter.  Now, one could say a lot of things to Bob that he would just let slide off his back...he is a Corporate Mediator and is no stranger to insults and agitated behaviour, but spewing HATE SPEECH about his President, that is where he draws the line and exercised HIS 1st AMENDMENT right.  Should he have said that?  Maybe no, but those protesters MUST understand that not everyone is going to agree with them and everyone has the RIGHT to speak their mind, not just them!  And if they hurl insults to someone simply driving by, they better be prepared to hear an opposing opinion! 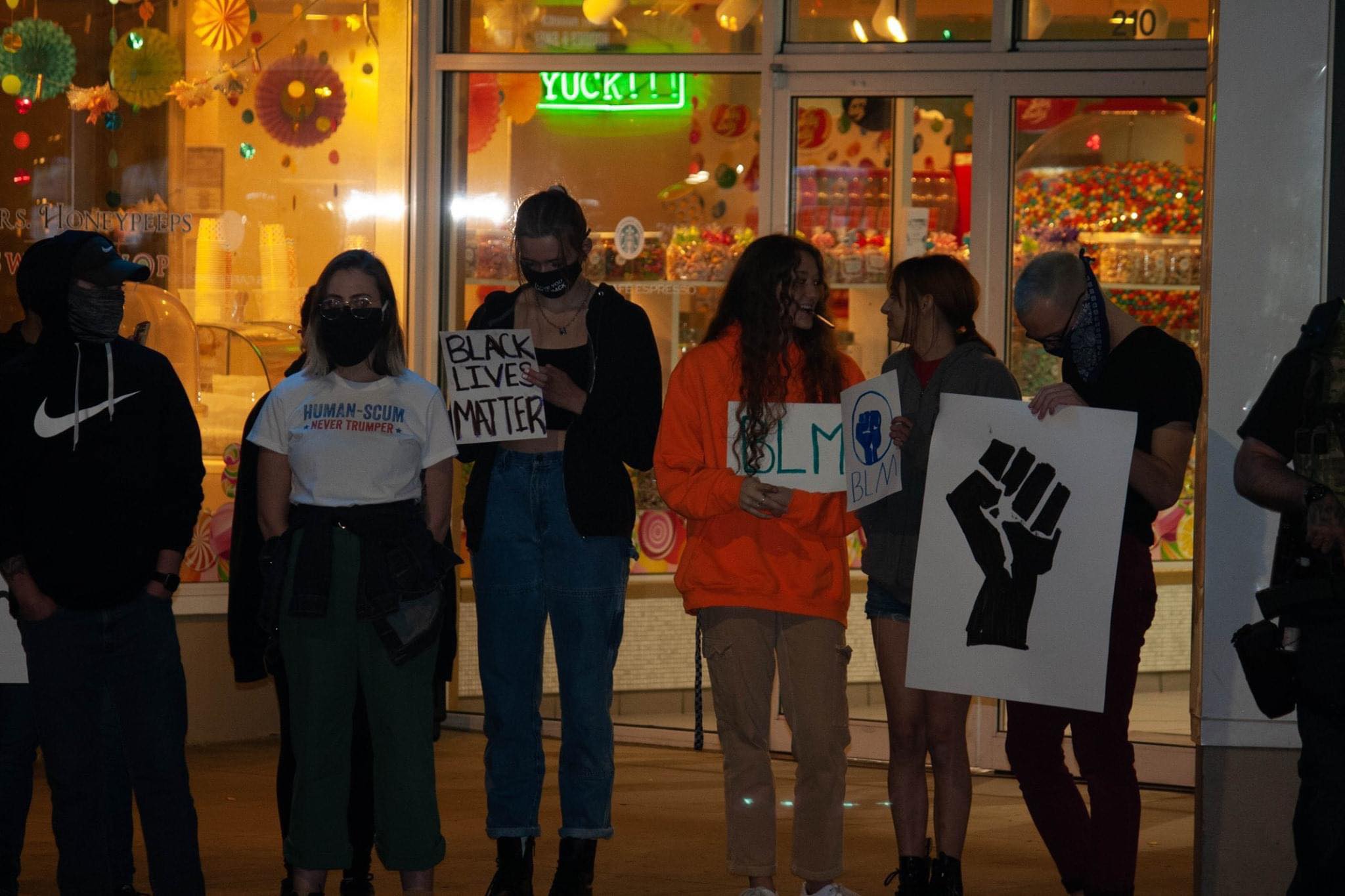 Bob actually felt bad that he had that moment of weakness and drove back around to talk to the group of protesters that had heckled him.  He wanted to apologize, and to use his Trump tag to open a line of communication.  As he circled back around and pulled to the curb close to where the protesters were yelling out their Black Lives Matter rhetoric, Bob was confronted with a few of our local Protectors, Guardians, (Dan Carson and Brett Surplus) they heard the heckling of the protesters and also what Bob said.  He was told to stay in his truck and to not cause any problems as one of their jobs was to protect the protesters.  Bob apologized for his words, "ya'll suck" and had the opportunity to also apologize to a young man leading the protest.  But at no time, did Bob jump to the defense with a, "well do you know what they said to ME" attitude.  No, he didn't because that is not the type of person he is.  He simply explained that if someone insults our President they are insulting him and that he had a right to espouse his opinion to their antagonistic behaviour.  He got his chance to talk to the leader of the BLM group, Joseph and they ended the conversation with a better appreciation for each other.  Some great photo-ops were taken of the two of them and one would think, that was that. What a nice ending to this story with a good moral.  ENTER STAGE LEFT...THE MEDIA! 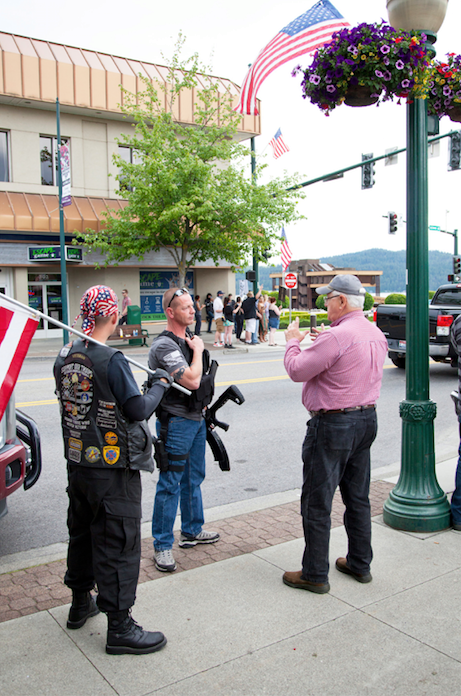 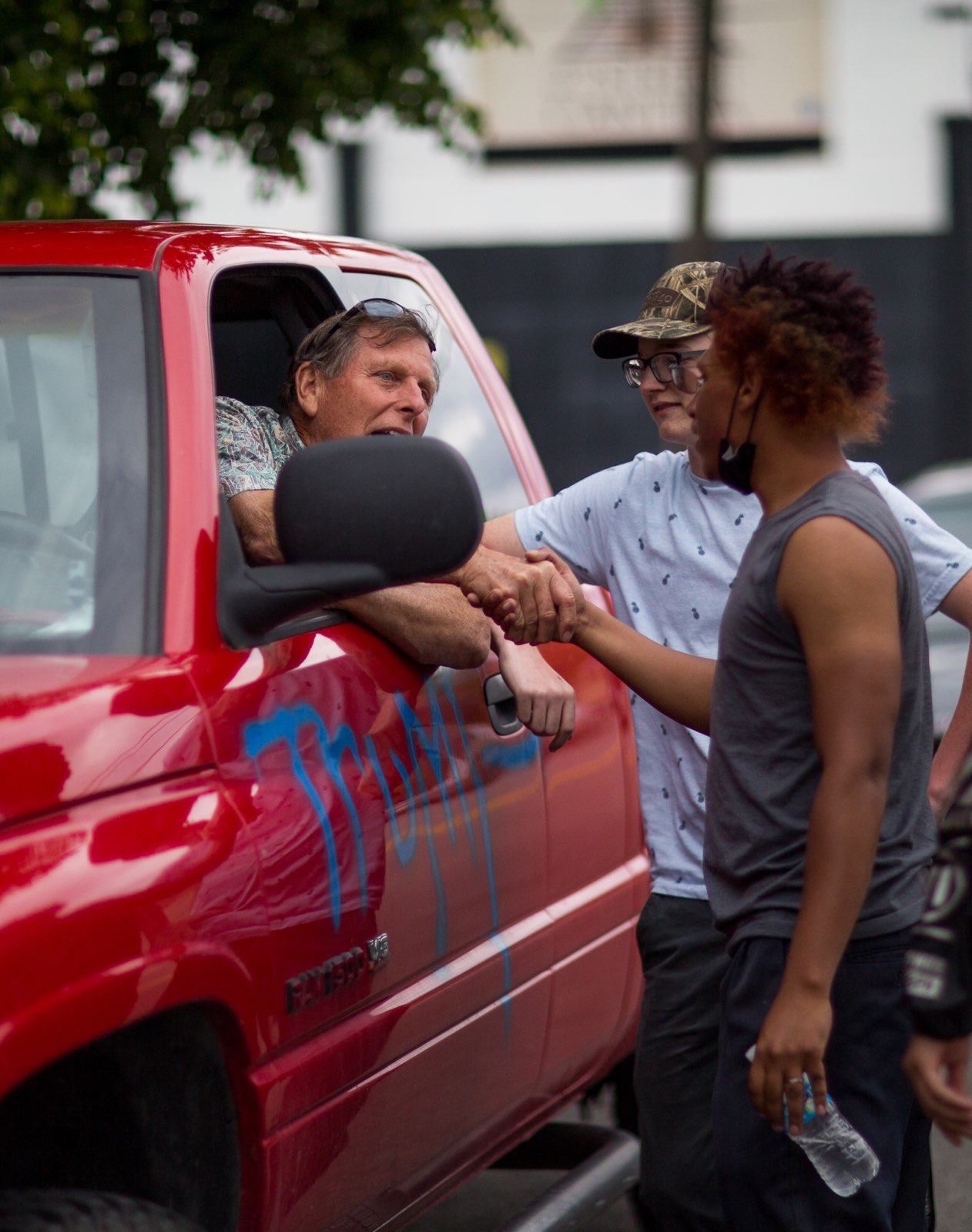 In comes our local newspaper, The Coeur d'Alene Press, RALPH BARTHOLDT, reporter.  And his story starts like this:  "Coeur d’Alene resident Bob Dorn didn’t distinguish between protesters chanting Black Lives Matter slogans Tuesday evening in downtown Coeur d’Alene, or the armed men and women standing nearby on the sidewalk. 'You guys suck,' Dorn yelled at them from behind the wheel of a red pickup truck driving on Sherman Avenue near the corner of Second Street. The side of his pickup truck spray-painted with the name TRUMP, Dorn made another pass, still shouting."   June 3, 2020 1:14 AM https://cdapress.com/news/2020/jun/03/second-night-of-protests-peaceful-5/

One woman who was interview stated: “I believe in the First Amendment,” she said. “The right to voice your opinion, and I believe in the Second Amendment, the right to bear arms.”  But ONLY if you are a protester can you voice your opinion?  Right?  Otherwise, just SHUT UP!  Especially if someone is hurling insults about President Trump?  It's perfectly legit, encouraged and acceptable to insult our President, but hold your tongue at a BLM protest?  You MUST RESPECT EVERYTHING THEY SAY!  Now, did Mr. Bartholdt interview Mr. Dorn to get his side of the story?  OF COURSE NOT!  Did Bob Dorn, drive back around as this columnist claimed and, "Dorn made another pass, still shouting."  NO, NO he did NOT drive by again "shouting."  His second pass was to park his truck and talk to Joseph Pleasant, the young man who evidently organized the BLM protest in our downtown area.  So this, "reporter" didn't even ask Bob why he reacted as he did but made him the scapegoat of his article.  Had he talked to Bob, then the story narrative may have changed a bit, now wouldn't it?  It may have read: BLM GROUP GETS OUT OF HAND HURLING INSULTS TO WHITE TRUMP SUPPORTER! Nah, that happens so often that it is just not newsworthy and certainly doesn't promote the narrative...  What also wasn't reported was the fact the Mr. Carson, one of the armed protectors who talked with Bob after he parked his truck, also address the group of young people protesting who were heckling Mr. Dorn;

“I talked to the protesters after Dorn left and told them that if they are going to throw out insults to people, like Mr. Dorn because of the name, TRUMP on the side of his truck then they better be prepared to accept the ramifications of their actions…that people may respond back and their response may not be a response that you like but all citizens have the same 1st amendment rights as you (the protesters) do.” ~Dan Carson

None of this was mentioned in the CDA Press article because it didn't fit the "peaceful protester" narrative.  Mr. Dorn had just as much right to say what he said in response to the disparaging remarks targeting at him.  Didn't he?  Or is this First Amend Right that we keep hearing about in the media only pertain to BLM protestors or the radical ANTIFA that takes 6 city blocks hostage, or to the rioters and looters?  If a Conservative defends OUR President he is an "agitator, a racist, a white supremacist"  If any one OF YOU THINK LIKE THAT, well...YA'LL SUCK!

And then the Washington Post got wind of some hot news coming out of Coeur d'Alene...Just imagine the excitement they must have felt to use their POWER to resurrect the Dead Aryan Nation, and man did they jump on that like white on rice...can I still say that?  Does that offend white people?   Everything that is going on, everything that has happened in the last several weeks all stems from pushing a narrative, and it's not just what we experienced here in Coeur d'Alene, it is all over our nation.  We are seeing people's lives being destroyed, businesses destroyed, big companies and little Mom & Pop shops looted...life savings for so many of our poor, GONE.  Hasn't the Corona narrative taken enough toll on the American people, but now THIS!  Is this really all about George Floyd?  Did ANTIFA take 6 blocks hostage in Seattle in memory of George Floyd? Is this what he would have wanted?  If so, then he was a very bad person.  THE NARRATIVE MUST STOP!  Believe it or not, the VAST majority of White Americans are NOT racist, most of us judge people on their actions, NOT their skin color!  Can the black community say the same thing?   The whole mask thing is kinda making sense to me now...it really IS hard to breath when wearing one. Narrative?

WHY GEORGE FLOYD? WHY IS AMERICA BUYING INTO THIS NARRATIVE?