What do the Charlottesville, "riots" (2017) and the Virginia Gubernatorial race (2021) have in common?  Terry McAuliffe!  And what do these 2 things and the Capitol protest all have in common?  Leftists!  Leftists who are pretending (paid or unpaid) to be the dreaded white supremacists! Now going back to Charlottesville, Va. in 2017, a group of revisionist history makers wanted to expunge Civil War history, directing their ploy on a statue of Robert E. Lee.

To be brief, two groups, one for removing the statue and erasing all remembrance of the FACT that it was the Democrats that fought to keep slavery, and the Democrats that created the KKK, the Democrats that vehemently wanted to thwart the Civil rights Act...they needed to get rid of the optics that might cause a youngster to take a look into our country's history to see the truth. Obviously the teachers won't teach it and as far as Terry McAuliffe is concerned, it is NO BUSINESS of Va. parents to have a say in what their children are taught in public schools! We just can't have that!

And then there was the other group of folks who know that our country's history must stand as a reminder of past events and to what lengths people will go to preserve their way of life--slavery.  Even if this means, reminding people that there was a time when the Dixi Democrats fought tooth and nail to keep slaves working their farms.  Removing Robert E. Lee would remove the visuals of the facts and both sides knew this; out of sight, out of mind.

Both groups peacefully protested and there certainly were some fine people on both sides of the debate.  But, like clockwork, ANTIFA showed up and almost as if it were orchestrated, torch carrying, "white supremacists" were resurrected to join the show.  Mayhem broke loose and a woman was killed.  I don't think we have to look far to know who paid for this performance; GS!  It was so well orchestrated that our infamous resident RINO, Mitt Romney wrote a wonderful review of the performance that day. 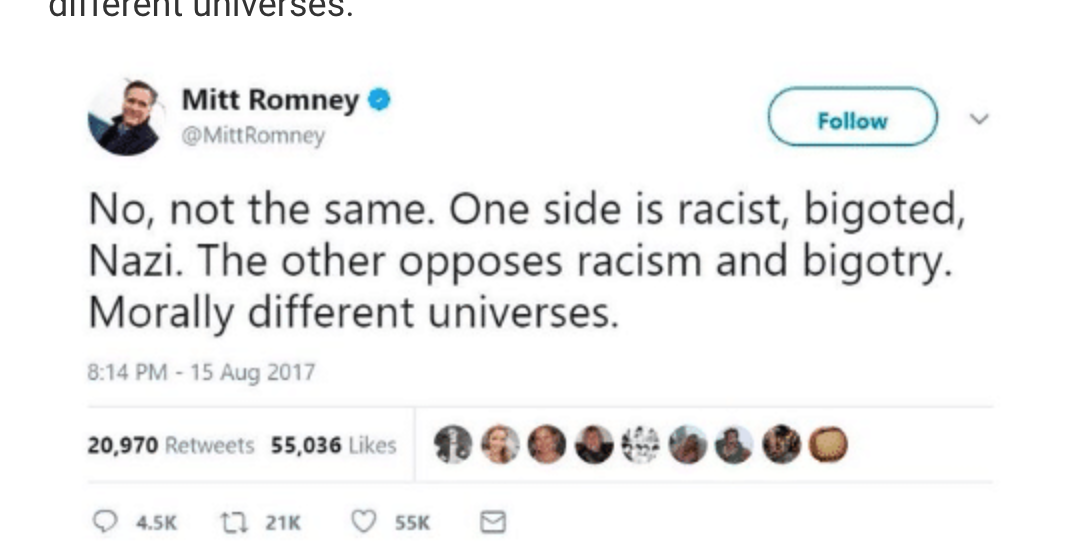 Ahh, sweet, ignorant Mitt, I hope the summer of, "mostly peaceful protests" where cops were murdered, federal buildings torched, billions of dollars of damage and several Seattle city blocks taken hostage by armed "peaceful" protestors have caused you to see the truth and to expose your complete stupidity!  But I digress...  Let compare the LIES of the left and how they believe they can continue to trick and fool Americans...of course with the help of the mainstream media!

So, in 2017 the Left pitted Antifa against the resurrected KKK in the form of White Supremacists. But just the other day, Va. Gubernatorial candidate, McAuliffe is busted as several bad actors who claim to be a part of the NAZI /Fascist type Lincoln Project, posed in front of a Youngkin tour bus, PRETENDING to be...?  Oh, yes, I remember, the torch carrying, pretend Neo-Nazi, White Supremacists that just happened to be in Charlottesville, Va. in 2017--to create the optics,  ANTIFA=good, White Supremacy=bad. The only problem is they both come directly out of the Leftist Production Company.  They are actors!  And bad ones at that. 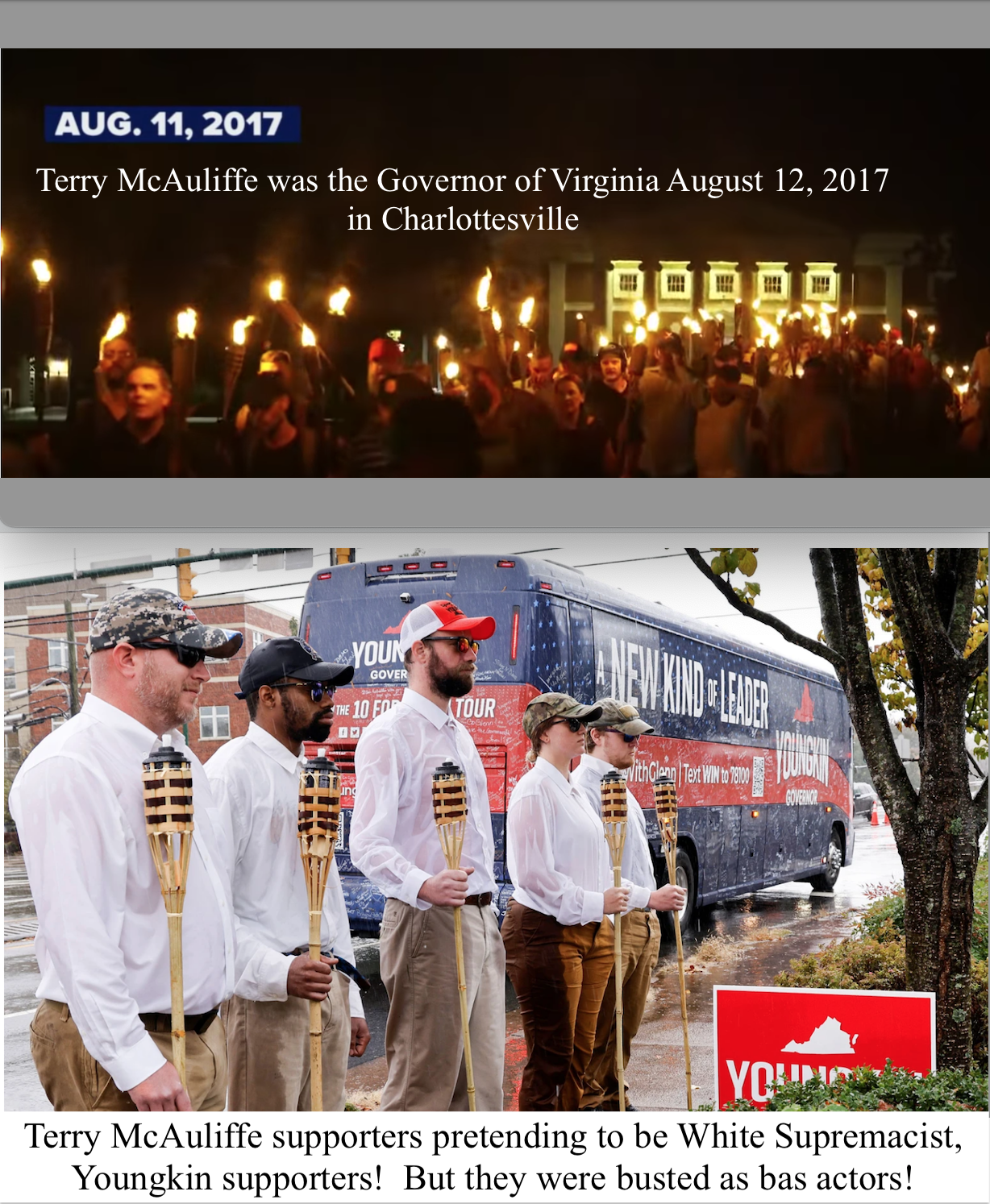 Alrighty now, what does this theatrical setup, on both counts, Charlottesville and Governor's race have to do with the Jan. 6th Capitol (mostly peaceful) protest?  Acting of course!  Political plants, FBI operatives, but mostly inciters!  We saw those individuals with our own eyes in Aug. of 2017 in Charlottesville!  But with the insidious help of fake news outlets like CNN, the inciters were there to fulfill their very important role.  On Jan. 6th, we know that John Sullivan, a well known agitator for both BLM and ANTIFA admitted on his video that he dressed up like a Trump supporter to gain the confidence of actual Trump supporters and to encourage violence.  Sullivan was the one who filmed the death of Ashli Babbitt, an unarmed young woman, murdered by a Capitol police officer, just a few feet from him.  Sullivan was paid, $35,000 by CNN AND NBC for his video, a total of $70,000!  Sullivan was paid actor, sent with a CNN contributor and admitted that he pretended to be a Trump supporter.  How many other Sullivan supporters were there with him as he has quite the radical following as Jayden X!  https://rumble.com/embed/vabkpb/?pub=4 <--click to watch video!

THIS is what the left does!  They lie, they act, they pay to incite violence and the liberal left is simply too brainwashed to see the truth, even when it is presented to them.  Watch the video below to the end.  This is the radical Leftist, John Sullivan, Acting!

John Sullivan BLM Activist is a Uber Driver, Actor and Figure Skater (You Can't Make This Stuff Up!)  <--click to see the great acting!

So, it all comes together!  No different than the, "RUSSIA, RUSSIA, RUSSIA" screenplay, written, directed and acted out by the Deep-State actors guild!  It was short of a miracle that McAuliffe was caught in his "white supremacist" production before the complicit media had a chance to put this farce on the big screen...  Now, LET'S GO BRANDON!

THE LIES ABOUT THIS VIRUS ARE TOLD BY DOCTOR DR. LEE MERITT FACEBOOK WON’T LET ME POST!