Kelly Ernby tested positive for COVID and it is claimed that she died suddenly from Cv-19 complications. What were those complications?

Should equal attention or "mockery" be railed against those who have been very openly "pro-covid shot" and then get infected or died from the vaccine or the infection after being shot up? Are we seeing the MSM chastising those who claimed, like President Biden or Dr. Fauci  did, "If you get the vaccine you will not get COVID?" How much mockery should be aimed at the fact that in barely 12 months people are needing booster upon booster and it is now clearly evident that it is those who are "vaccinated" that are contracting COVID and spreading it? Should those with natural immunities or those who do not want to inject this experimental juice into their bodies, mock and laugh every time they hear about someone that is triple boosted that ends up in the hospital because of a COVID infection, or jump for joy when someone dies of a stroke or heart attack from a reaction to the shot? Is that who we are now?

After watching this video I am wondering if the unvaccinated should point a clot free finger at those who are vaccinated, triple booster and mask wearing who are getting infected with the COVID virus, spreading the sickness, overwhelming our hospitals and some even dying...should we?

Kelly Ernby, was one of millions of Americans who do not want this Fauci Juice injected into her body and she had every right to hold that conviction.  Let me ask you something, if Mrs. Ernby had taken the vaccine and had a reaction that resulted in DEATH like what has happened to tens of thousands of Americans, how would the media react then?  What if this conservative woman had the vaccine and then contracted COVID and died while being fully vaccinated?  How would the media spin that?  But is there more to this story?  Much more?

According to the US SUN, "The Orange County Republicans group said Ernby had died suddenly from a 'brief illness,' but did not elaborate on the circumstances surrounding her death."   So I searched and searched for any information regarding what her "brief illness" was.  Report after report claim she died of "complications of COVID" and the fact that she was, "UNVACCINATED" ruled the bylines.  I searched for anything that would fill in the blanks as to what those, "complications" were.  Did she have some unknown pre-existing condition or comorbidity?  It is obvious that Mrs. Ernby did NOT simply die OF COVID, but of some complication in addition to having COVID.  The Hollywoodbios site states this, "Meanwhile, she died on January 4, 2022, due to covid-19 issues."  Issues?  What exactly is a COVID-19 issue?

Considering this is such a huge, "TOLD YOU SO" story for the Left, you'd think that someone who was close to her would have something to add to this story.  It is also blatant that her and her husband were NOT on the same page as he is alleged to have said on his facebook page, "She was not vaccinated...that was the problem."  Even in her "sudden death" he is not defending his wife.  Odd...really odd...

I searched to see how long she was in the hospital, or what therapeutics she had been offered and the ONLY thing I found was a blip on the Yahoo Finance radar that stated,  "Ernby reportedly died at home..."  The Daily Beast is quoted saying this, "A deputy district attorney and up-and-coming Republican political star in California’s Orange County has died abruptly after telling friends she contracted COVID-19. Kelly Ernby, a presumed candidate for the state Assembly in 2022, was only 46 years old. According to the Los Angeles Times, she fell ill shortly after speaking out against vaccine mandates at a rally organized by Turning Point USA on Dec. 4."  Where are these friends now?

Maybe my tinfoil hat is on a little too tight tonight, but something smells fishy...let me just go through this...she is reported to have died Jan. 4th, 2022.  It has also been widely reported that, "she fell ill shortly after speaking out against vaccine mandates at a rally organized by Turning Point USA on Dec. 4."   I wonder how long, "shorty after" means?  Days, weeks?  She didn't look ill at all in her Christmas Instagram photo with her husband and was obviously well enough to be out taking pictures. 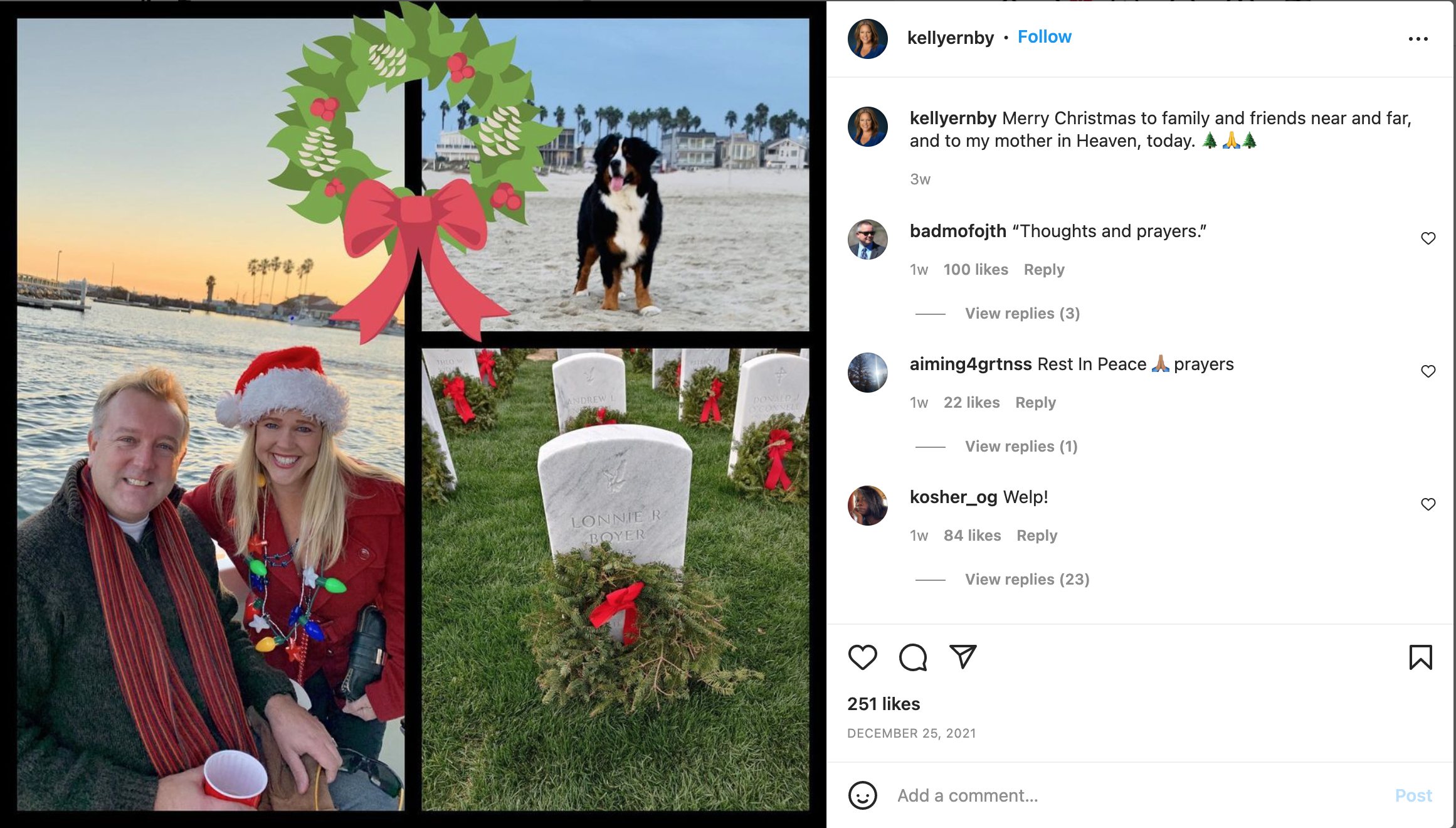 So, did she contract COVID after Christmas?  Or, did she get infected, shortly after Dec. 4th and had already recovered by Christmas?  And, did she test positive for the Delta or the Omicron variant?  Have there been any deaths from the Omicron variant?  I find this comment from Jon Fleischman, former executive director of the California Republican Party, strange as well, (As quoted by the LA Times) "He (Fleischman) was shocked by her 'sudden' passing and explained that the two planned to meet later this week to discuss another state Assembly run."    Todd Spitzer the  district attorney of Orange County, California, where Ernby was the Deputy district attorney also said something, well just plain odd,

So, when did Fleishman and Kelly Ernby set up this meeting?  Isn't this interesting?  If she actually died of COVID, and was sick, why would he say they had planned to meet within days?  And why do both of these men, who obviously spoke with her regularly, didn't know she was seriously ill with COVID, and that her death came to them, well to everyone as a, sudden shock?  Something is just NOT adding up.

But alas, we have the words written, over and over, "covid complications."  But NOWHERE can I find anything about what these "complications" were.  From what I am understanding, she tested positive for COVID sometime after Dec. 4th.  It was reported, "...has died abruptly after telling friends she contracted COVID-19."  She went out on Christmas looking well, taking family photos and visited the grave of her deceased mother.  So let's assume for assumption sake, that she didn't contract COVID, or at least test positive until after Christmas.

From all the accounts I have read she was not ill, was not presenting any symptoms...if she had been then her death would not have been abrupt or unexpected.  She certainly would not have planned to meet with a colleague within days, and he would not have mentioned that meeting.  RIGHT?  And her boss at the DA's office would have certainly known that she was very ill.  So what did Kelly Ernby actually die of?  And as the Left smashes her corpse, why aren't any of her close friends asking these same questions?  What did Kelly Ernby actually die of?

MASKHOLES ARE LITTERBUGS THROWING THEIR BIOHAZARD WASTE ON THE GROUND!

BIDEN HARRIS PROVE THEIR VACCINE MANDATES ARE POLITICALLY MOTIVATED! NO BASIS IN SCIENCE!