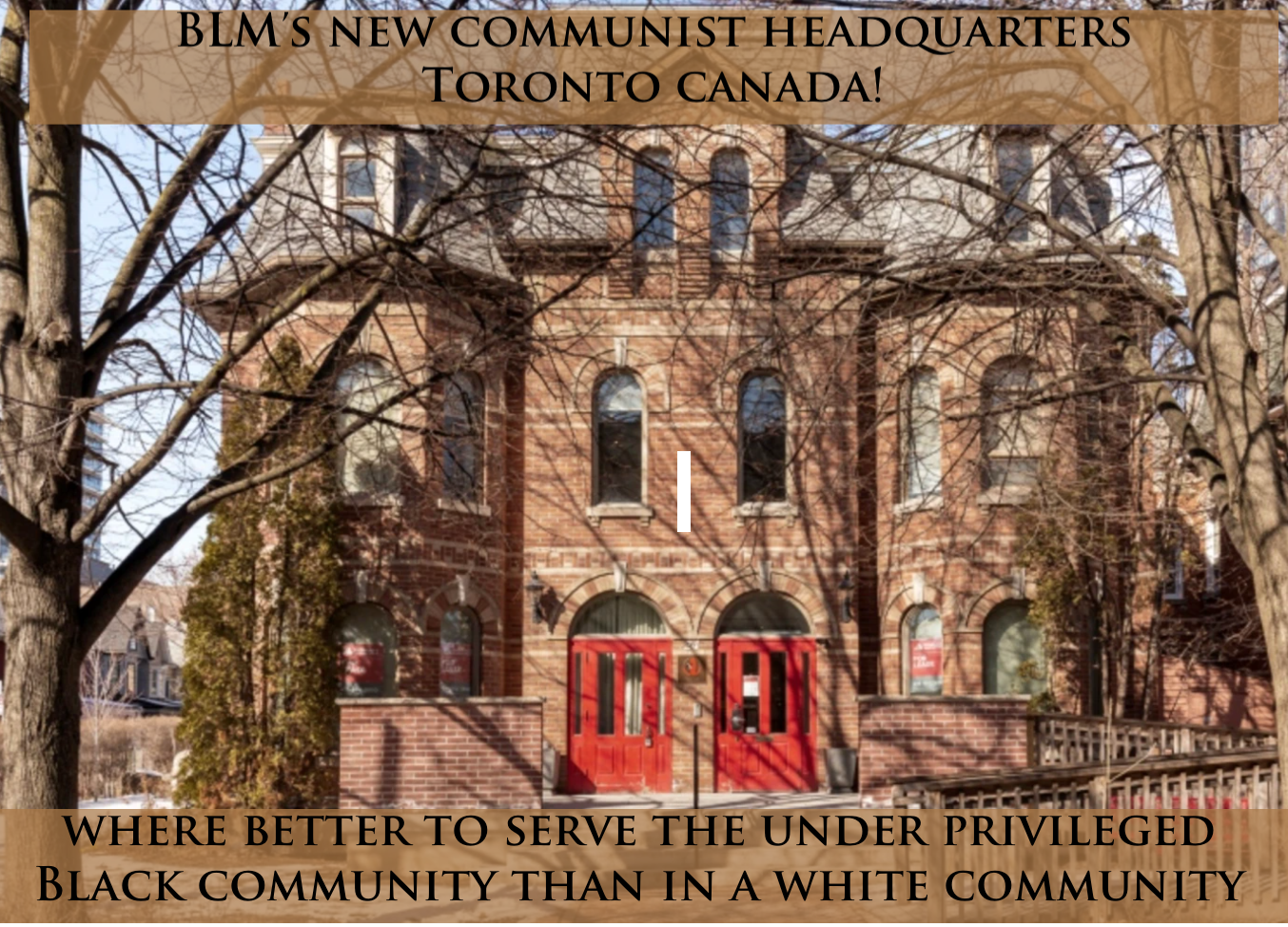 So, what would a super funded, Black Lives Matter do with some of its $60 million cash coffers?  Well, buy a 10,000 sq' mansion in Toronto, Canada of course.  This historic building once hosted the the headquarters of the Canadian Communist Party.  Hmmm, ok, this seems like an appropriate location to serve the densely black population of Toronto.  Except, the population is predominantly white.   So what gives?  And why is it that BLM is spending so much money on lavish properties in Georgia and Los Angeles...to the tune of $3.2 million?  One would assume these are properties located in the inner cities of these places, after all that is what most Americans have been brainwashed to believe.  NOPE, they are swank homes in white neighborhoods.  Come on man,  Black Lives Matter, as the moniker suggests, represents, um, BLACK LIVES...because they MATTER.  Evidently those few people in charge of this cash horde believe their lives matter the most...for the good of the movement comrade.

Yeah, not so much.  BLM is purley a Marxist, activist group that has very little resemblance to its name.  With the hundreds of millions of dollars that have been donated over the last few years by giant WOKE corporations like Amazon, Microsoft, Nabisco, Coke...one would presume that this group would be putting their money where their mouth is, like into the Black Communities they claim, MATTER!  With all this money, where are all the community outreach facilities in the "under-served" black communities? Where are the community patrols that walk the hoods of Detroit, Chicago, La, Baltimore, that the millions of BLM members claim to care about?  Why is it that black on black crime is worse in these communities since the advent of the BLM  movement?  And WHY aren't blacks demanding to know the answers to these questions?

To have Marxism actually work, members must first be told a lie over and over again.  They must be agitated and they need to be taught from a very young age that they are victims of the government, of society, that they are oppressed by the man.  It is crucial to TEACH, to indoctrinate these young black people into the sacred ideology that they are oppressed. Not because of bad choices or bad behavior, but simply because the evil of capitalism is keeping them down while allowing others to unfairly prosper.  This is pounded into their heads, pretty much from birth and those that are doing the pounding are ironically profiting from this propaganda, living in upscale homes, driving new cars and taking elaborate vacations, and even when they are elevated to the point of First Lady the rhetoric strengthens-- "Don't look at my wealth & success, look at your pathetic situation...you are a victim!"

There is so much more to the psychological programming of Marxism, but that is it in a nutshell and we are clearly seeing that this is the intent of the BLM movement...well at least those who can see, those who can not are readily taking a knee.  Prophetic poetry right there. And even when it is put right in front of their faces, the WOKE and the WOKE wanna-be's refuse to see it.  These BLM rulers are, "organizers, trained Marxist's...super versed on ideological theories."  And yet, they have the majority of the black community deceived that their common goal is to help, Black Lives.

Now ask yourself, why would this organization set up a charitable shell in Canada to buy a mansion that used to be the headquarters for the Canadian Commies?  I suppose the obvious answer would be, BLACK LIES MATTER, oops, I only meant to think that, not write it outloud.

COEUR D’ALENE, IDAHO AT IT AGAIN! STANDING UP TO A LIBERAL HEALTH DEPT! WE WILL BE HEARD!