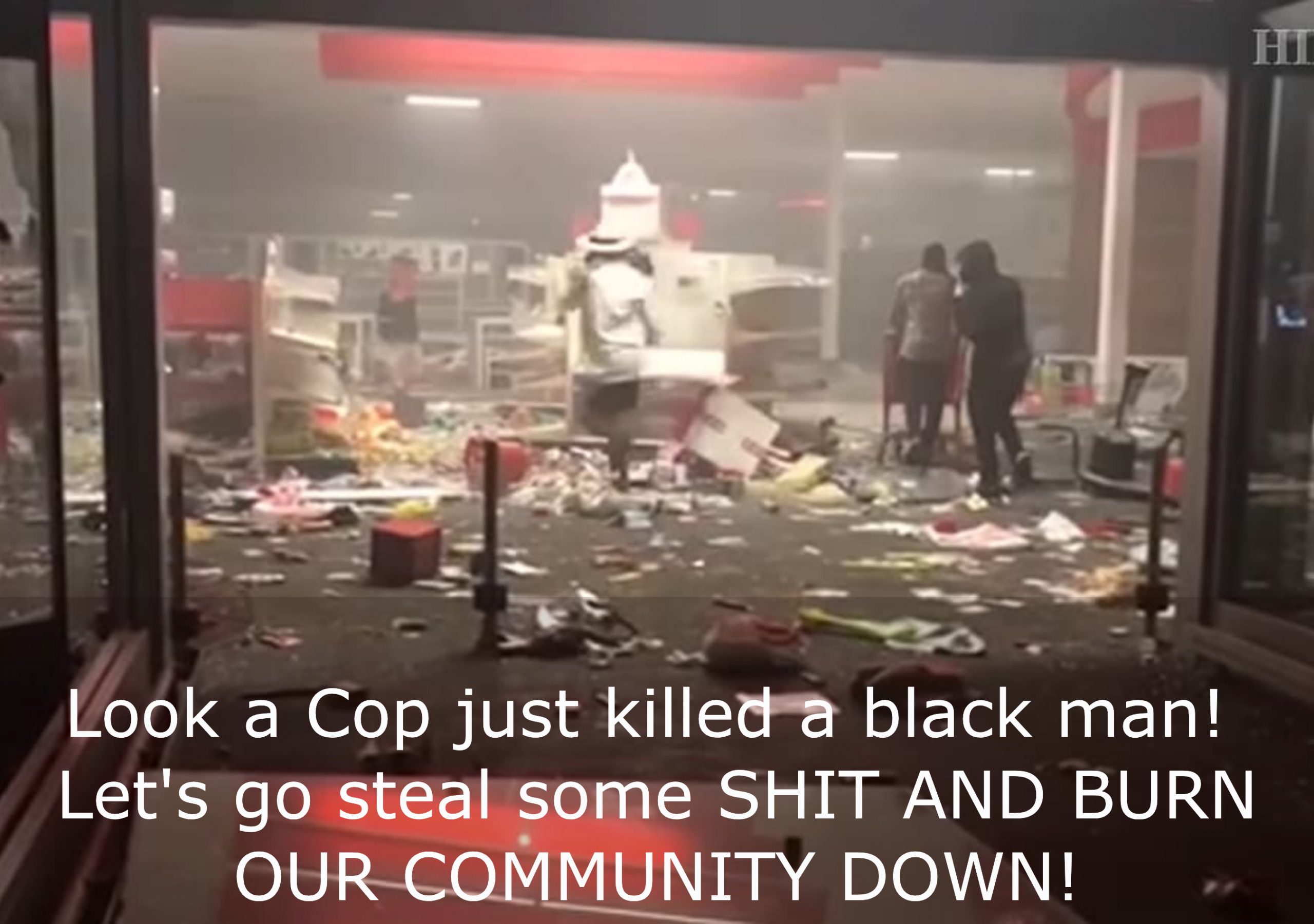 Why is it that no one wants to place blame where blame should really be? Why is it that anytime a a black man is killed by the police and the opportunity arises that there are camera’s, cell phone and lots of people around, the RACIST, BAD COPS narrative ensues and then—THE RIOTS!

Black communities looting, burning and destroying business of their neighbors without a second thought? Who does this? Evidently, black people do! We saw this very thing happen with Trayvon Martin, Michael Brown & Freddy Gray. But why? Why do these people turn into uncivilized savages, flipping over cars, burning buildings, stealing whatever they can find? I get being mad…angry at what appears to be an injustice, I mean come on, we’ve ALL BEEN held hostage by our local governments for months now, and many have felt that this was quite the injustice! But can you imagine people, rioting, destroying their neighborhoods because of THE COVID?

How few took the time to really understand what happened in the case of George Floyd? The Media Mobsters are running so fast with their RACIST, BAD COP narrative that one can’t even catch their breath or focus their eyes to see the facts. Because FACTS MATTER! First, we need to know if Floyd was really that “sweet, teddy bear” that “wouldn’t hurt anyone” kinda guy. I remember someone else being described as that type of person–Michael Brown.

George Floyd moved to Minneapolis in 2014 after being released from prison in Houston, Texas following an arrest for aggravated robbery

Ok, so now we have a little background on our sweet, cuddly, teddy bear. What happened that day? Why did Floyd find himself being “harassed” and arrested by the police? Let’s look at the 911 call:

What follows below is a full transcript of the 911 call:

Operator: 911 what’s the address of the emergency?
Caller: This is ah 3759 Chicago Ave.

Operator: How can I help you?
Caller: Um someone comes our store and give us fake bills and we realize it before he left the store, and we ran back outside, they was sitting on their car. We tell them to give us their phone, put their (inaudible) thing back and everything and he was also drunk and everything and return to give us our cigarettes back and so he can, so he can go home but he doesn’t want to do that, and he’s sitting on his car cause he is awfully drunk and he’s not in control of himself.

Operator: On 38th St. So, this guy gave a counterfeit bill, has your cigarettes, and he’s under the influence of something?
Caller: Something like that, yes. He is not acting right.

Operator: What’s he look like, what race?
Caller: Um, he’s a tall guy. He’s like tall and bald, about like 6…6½, and she’s not acting right so and she started to go, drive the car.

Operator: Okay so, female or a male?
Caller: Um…

Operator: Is it a girl or a boy?
Caller: (Talking to somebody else)—he’s asking (inaudible) one second. Hello?

Operator: Is it a girl or a boy that did this?
Caller: It is a man.

Operator: Okay. Is he white, black, Native, Hispanic,  Asian?
Caller: Something like that.

Operator: Alright (sigh).
Caller: How is your day going?

Operator: Not too bad.
Caller: Had a long day, huh?

Operator: What’s your name?
Caller: My name is [redacted].

Operator: Alright [redacted], a phone number for you?
Caller: [redacted].

Operator: Alright, I’ve got help on the way. If that vehicle or that person leaves before we get there, just give us a call back, otherwise we’ll have squads out there shortly, okay?
Caller: No problem.

So, Mr. Floyd used, knowingly or unknowingly a counterfeit $20.00 to buy cigarettes. But when the store owner told him this and asked for the cigs back, Floyd REFUSED! Why? A decent person would have been horrified that they were in possession of counterfeit money and would want to find out where they got it. RIGHT? Why would Mr. Floyd refuse to give back the cigarettes? And then, there is the store owner stating that Mr. Floyd was very drunk—“under the influence of something”. Are we to be lead to believe that this shop owner was making this up? The store owner was NOT A WHITE MAN!

I think it is very safe to assume that the police were preparing for the worst and I also believe once they arrived and spoke to Floyd they ran his name through the police data banks and knew of his violent criminal background. I would also presume that the police also knew that he was “high” on something as they very are well trained to recognize the signs of someone under the influence. Then we must look at the neighborhoods these police work in. As we clearly see from the mob mentality and complete disrespect for others that these people are showing, they are not quality places to live and certainly are not inhabited by respectful, upstanding citizens. I mean come on, if you are out there, stealing from businesses, burning them down, destroying people cars, homes, property because a man died, a man you DIDN’T EVEN KNOW, then I absolutely wouldn’t want to be a police officer in those places!

So the police respond to the 911 call…knowing there is a big black man, who is not acting right, under the influence of something, who is peddling counterfeit money…safe to assume they ran his name and knew who they were dealing with…perhaps someone who didn’t want to go back to prison… Did the police use excessive force? Maybe…Do I think that the force used “murdered” Mr. Floyd? No, not yet I don’t. I want to see the toxicology report. I do most certainly think that the officer that had his knee on Floyd’s neck absolutely contributed to his death, but then again if Floyd had simply given the store owner back the cigarettes, this all could have been avoided. But he didn’t. The fault starts there!

STOP the senseless destruction of innocent people’s property! YOU ARE NO BETTER THAN THE COPS THAT YOU CLAIM, “MURDERED” AND INNOCENT MAN! WORSE ACTUALLY!

WHITE SUPREMACISTS BROUGHT TO YOU BY THE DEMOCRAT PARTY! CHARLOTTESVILLE, THE CAPITOL RIOTS AND NOW THE GOVERNOR’S RACE!

OBAMA WON HIS NOMINATION & SECOND TERM BY FRAUD SO WHY WOULD 2016 OR 2020 BE ANY DIFFERENT?