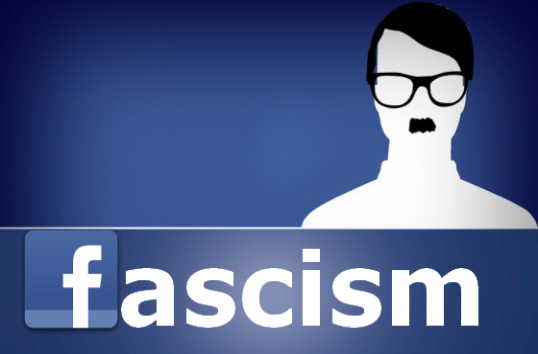 This is an, IN YOUR FRIGGEN FACE, FACEBOOK FASCISTS!  I am sick and tired of being in Facebook jail simply because they don't like what I have to say!  A few days ago I passed on a post that some of you may have seen floating around FB about Masks and a certified OSHA trainer.  Well, I took that post and tweaked it a bit to reflect our business.  When I am not making ZERO dollars doing what I love the most, writing, I am working with our painting company which we have owned for 30 years.  Our company must adhere to OSHA regulations regarding masks...what type to use, what they are used for etc.  So, I posted our professional opinion regarding masks and THE COVID.  BAM, facebook jail for 30 days!  UNBELIEVABLE!  And it's only because the original FB post didn't mention the word, COVID and I did!

The last time I was in facebook jail was when making a joke to my adopted BLACK son when he was upset because the garbage man wasn't picking up his garbage and I said, "baby, they don't pick up White Trash either!  He laughed, I laughed and facebook banned me for 30 days!  Yes, banned for 30 days for saying the words, WHITE TRASH!  Before that, I was banned for reporting on those peaceful Muslims killing over 2 million Hindus.  This was marked as HATE speech and I was banned for 30 days.  See article http://cbgr1971.org/files/Time/timeAug0271.pdf AND here!  And so many things I write about; vaccines, Muslims, 2nd amendment rights, abortion, just taking down by facebook fascists!  And there is NO disputing.  They give you a link to dispute, but when you put in the time to write down your thoughts as to WHY you don't believe your words go against THEIR community standards you get an error that says "Your comments could not be processed, try again later."  So you try again and get this message!  So, you really can NEVER dispute them!

Facebook HATES anyone who holds their 2dn amendment dear, but LOVES to encourage violence by rioters and looters and murders who use guns!  Anyone can post a positive post about Liberal CHAZVILLE with their guards loaded with AK-47's, but God forbid anyone make a post about  Conservative gun ownership, about protecting our homes, our families, our businesses... 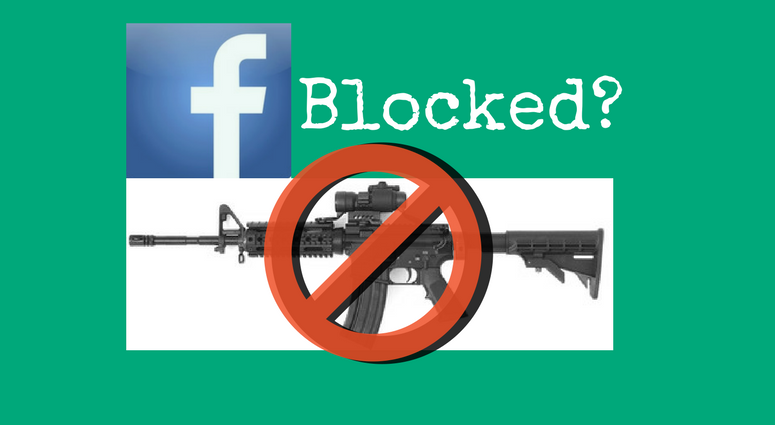 In 2018, Phil Briggs wrote a story for ConnectingVets.com about his experience going to a range and firing an AK; "All things considered, the story was not that exciting. I rented a rifle, some range time and went through a small box of ammo. Having never shot the AR before (my experience limited to shot guns and a couple handguns) I wrote an unbiased look at the weapon many people want to ban. I concluded that while all guns are deadly, the AR I fired, didn't feel grossly over powerful like the illegitimate killing machine portrayed in the news. "  After posting on Fascistbook, they wanted to boost the post to reach more people.  They set up the boost, paid the fee and then immediately received a rejection notice: Read the full article here. 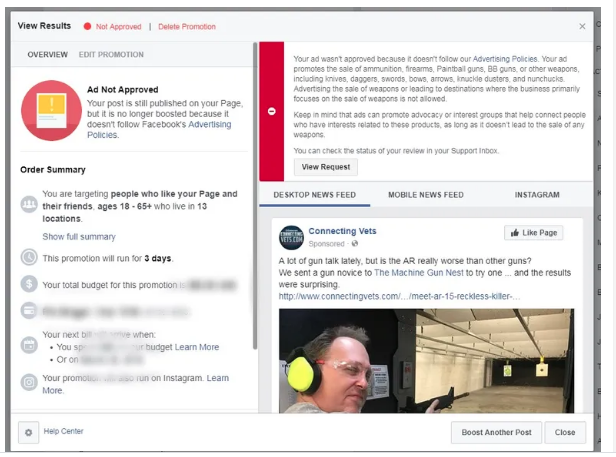 Here's another one among the myriad of Conservative censorship by facebook!  Fox News reports: "State Rep. Matt Caldwell said he received the message, 'Not Approved: Your ad can’t promote the sale of weapons or ammunition,' from Facebook when he attempted to share an ad that depicted him shooting a shotgun and touting his endorsement by the National Rifle Association, the Tampa Bay Times reported. Caldwell, a Republican, is running for Florida agriculture commissioner. I’m Matt Caldwell. I like guns. I love the Second Amendment, and I support our president, Caldwell says in the 15-second spot. That’s why I’m endorsed by the NRA.” Watch the video below.  No preview, but just click the link.  Caldwell make an excellent point.  He has power behind him to FORCE facebook to post his ad, but what about people like us that don't have that power?  Yeah, we get sent into a facebook loop when trying to appeal.

National Review spoke with Tactical Sh*T who was being censored by Fascistbook:

Tactical Sh*t is an online community for Second Amendment supporters that has over 30 million viewers per month. The company follows Facebook’s guidelines by limiting its commercial offerings to firearms accessories and extraneous gear. Yet it was banned from the site anyway.

Kirgin believes that Facebook is using an “algorithm” to ban pro-Second Amendment pages. The last time that a Tactical Sh*t post was flagged — about four months ago — he notes that it was removed and his punishment was decided in under 20 minutes. “No human being could have made that decision” so quickly, he says. “The targeting being done is most certainly algorithmic.”

Since that time, the company’s Facebook page had not been flagged again until, without any justification, it was pulled down on Sunday.

“ISIS can have posts saying ‘Death to America,’ but if you post a picture with a gun you get banned,” Kirgin says with frustration. “Your company’s livelihood gets attacked because you post a photo that even looks like a gun.” National Review

These are just 3 examples of Facebook 2nd amendment rights censorship and there are so many more from average Joe's like us and I am sick of it!  Planned Parenthood can boost adds all over this country encouraging women to KILL THEIR babies and Facebook gladly takes their money!  This is sick and twisted!  Black Lives Matter, our homegrown domestic terrorist group can post whatever they want and Facebook gladly endorses them!  But Christian Pro-life groups, Conservative Blacks, Anti-vaccers and Conservative Homeschool groups are either banned or shadow-banned!  But wait, I want to clarify why I wrote "Anti-Vaccers" as I did.  You know that THEY, THEM that want to silence ANYONE who does not trust Vaccines call these people, "Anti-Vaxers" and there is a reason for that which I will NOT perpetuate.  I actually should start another paragraph because I am really topic jumping right now...

We all know that words mean things and in this era words mean MORE...whatever the Liberal's want to spin them as.  The term "Anti Vaxer" or "Anti-Vaxxer"...and man I am really going off topic now, but, I just write as it enters my mind...BUT this is really important!  X is derived from the Phoenician letter samekh, meaning “fish.” It is well known that the Christian symbol is a FISH.  So when these Progressive Liberals use the term, Anti-Vaxers they are pointing their fingers at Christians.  The accurate abbreviation for someone who is against vaccines would be, Anti-Vaccer as that is how we abbreviate a word, unless there is an agenda.  You will find post after post bashing those who distrust vaccines--"anti-vaxers" but for me, when I tried to put some google ads on my page to help pay for this site, I was DENIED Google ads because I had written a post regarding vaccines in a negative light!   And if we delve a little deeper, according to Psychology Today,  "What’s so mystifying about the letter “X?”For starters, the swastika X—or cross—has come to symbolize the very essence of evil."   There really is a method to their madness  but it is sometime so subtle we don't even see it or realize it.  So, when the Liberals use the term, Anti-Vaxers, you must understand the meaning behind that word!  This is why I prefer to use the CORRECT term, ANTI-VACCER!

Anyone can make a post about Satanism, Socialism, or any ISM, and they can spew their HATE SPEECH about Christians all they want, but the moment a Christian says anything negative about, well, just about anything, we are accused of HATE SPEECH and banned for a period of time that Facebook feels appropriate to fit our crime.  We are supposed to learn a lesson while in FB jail...like tolerance. If we call out Radical Islam as the terrorist that they are, BAM, JAIL!  If we report a hate speech post about Christianity, we are told that it DOES NOT violate Facebook's community standards!  I am just sick of this HYPOCRISY and CENSORSHIP!

Ok, well, my rant is over for tonight...it is late and sleep beckons me.  We MUST stand against this type of tyranny and censorship!  I am not sure how much more we can take...I mean we have people being forced to wear masks, social distance, not go to church, murderers roaming the streets because, well, Black Lives Matter...we are seeing our National history being destroyed before our very eyes...I for ONE just can't deal with much more!   So I say, F YOU FASCIST BOOK!  Oh and by the way, you won't be seeing this post on FB, cause, remember, I am banned for 28 more days...I suppose they put me in quarantine until all signs of my "disease" are gone.

Please leave your comments below...make them sane, because I need some sanity about now.

Pfizer laughs as they admit they had no idea if the COVID Vaccine worked!