"The Senate is populated, mostly, with politicians who don't have the courage to make a decision against the wishes of the Governor. I hope voters remember that in 4 years...It's high time we took a serious look at getting a new Attorney General. The current one is, in my opinion, incompetent." John Green, Former Idaho Legislator

Since late March (2020) the state of Idaho has been in a draconian style martial law. At first, like the rest of the country, it was a 2 week, shelter in place mandate to "flatten the curve" so that local hospital didn't get overwhelmed.  Now we know that NYC was the epicenter of this "crisis" and accounted for a vast majority of Coronavirus deaths in the entire country and then its neighbor, NJ followed by California.  These 3 states make up ONE THIRD of all deaths in the US, but we all had to shut down!  So, our sparsely populated state went into lockdown with the rest of the county.  Businesses closed, kids were banned from going to their brick and mortar schools and God forbid you wanted to get your hair cut!  But thank goodness for those essential business like liquor stores and our Washington neighbor's POT stores and of course giants like Walmart and Home Depot/Lowes for being able to stay open! Because we all are smart enough to know that THE COVID only frequents small businesses!

I think by now, most of us know how the death toll is calculated...death WITH THE COVID not FROM THE COVID...because, um, duh, SCIENCE!  So let's take a look at our death toll so far since this shindig began.  326 deaths in a population of 1.8 million people.  The VAST majority of those "presumed" or "confirmed" Covid deaths were 70+ years old.  Here is a breakdown in our county:

If you look at our little data display here, courtesy of our Dictator like Health District, you will see that we had 14 people die, presumably of THE COVID at a ripe old age of 90 or older!  I don't don't want to sound insensitive but come on people! We are also NOT told about ANY comorbidity for these elderly folks, but I would presume simply being in your 80's-90's+ that in itself would be someone nearing the end of their life span.  For some reason all pragmatism has just flown out the window and we must now be politically correct and oh so sensitive when it comes to the death of a person that was at the end of their life span.  The data is accurate on 08/26/20

Idahoans were so fed up with this Power Hungry Zealot of a Governor we gathered up a petition to OUST him from his dictatorial perch!  And now we anxiously wait for our Legislators to END this Ridiculous State of Emergency!  I am writing this as I am listening to the Idaho Government debate this issue and I am seriously on pins and needles! If this passes, which the majority of this state prays it will, this will put an END to the tyranny our citizens have had to suffer through; not for weeks, but for FIVE MONTHS!  Our Governor passed the buck to our County Health Department to decide for themselves, WITH NO INPUT FROM THE PUBLIC, to mandate mask wearing in our little county!  Outrageous--especially considering the average death age is in the 80's!  But please bring out the Progressive Liberal mask Nazi's...Who knew that our Conservative Coeur d'Alene, Idaho was being overrun by Liberals?  UPDATE---it did not pass!

Republican Heather Scott says it how it is!!!! 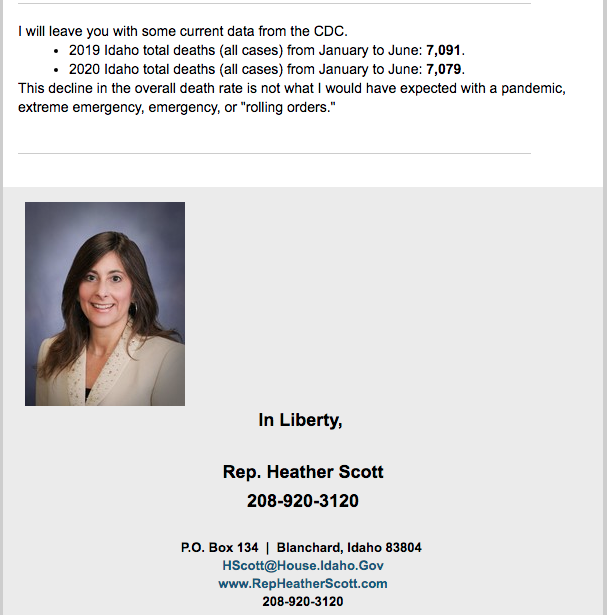 Heather Scott has been a Bull dog for Conservative Idaho when it comes to defending us against Governor Brad Little!  This is my absolute favorite comment by Scott as she states the FACTS!  And unlike those Liberal, Idaho Democrats who have their own RELATIVE truth, who want to elect a mentally deficient president who states to the world, "WE CHOOSE TRUTH OVER FACTS!" Facts are NOT relative to your "truth" and we have seen our fair share of relative truth coming from the Liberal Left...generally those truths are supplemented with: "could, should, may, perhaps, likely, in theory..."  These are NOT facts and it is NOT our Conservative Republicans that have forced these ridiculous and unequal mandates on us.  It is our RINO Governor and the Progressive, Democrat Liberals that see this Virus as a Money making machine, flowing with government funds.  The relative truth is that money grows on trees, but the FACT is, ALL this government money is NOT free, it is paid by us TAXPAYERS and the piper will soon start playing a tune of repayment.

Brad Little, because you have your own agenda and are NOT listening to your constituents, the citizens of Idaho have talked to their Government Representatives and we have clearly told you NO!  NO, we are not going to continue with this farce of a SOE any longer! We are done putting up with this unscientific and extremely unhealthy mask mandate that was enacted by an appointed, NOT elected health board...we are done watching our economy lose money and we are  wholly responsible to take our OWN HEALTH into our own washed & sanitized hands.  If you want to wear a mask, wear one, but if you don't you shouldn't be forced to.  ALL of our businesses need to open and Government funding of people who don't want to work MUST STOP immediately!  As it is we have a glut of job openings and not enough people who want to go back to work...when the Governor has to offer a financial incentive for people to go BACK TO WORK, we know that there is a big problem with our economy and our labor force that has become accustomed to getting money for nothing..."That ain't workin' that's the way you do it. Get your money for nothin'..."

So now, Idaho has to PAY people to go back to work! RIDICULOUS!

IT'S BEEN ALL ABOUT THE MONEY FOR LITTLE!  JUST LOOK AT THOSE NUMBERS!

He prolonged a State of Emergency for months so that Government funding would keep coming our way.    Yeah, we all want that rainbow colored unicorn called, FREE MONEY, especially those who don't want to go back to work.  But just wrap your brain around this!    W. Virginia receives over ONE MILLION DOLLARS per positive COVID test?  WTH?  Thank goodness for all of those false positives.  And my state of Idaho receives $600,000 for each positive COVID test!  OMG No wonder our Governor wanted to milk this virus for as much as it was worth! 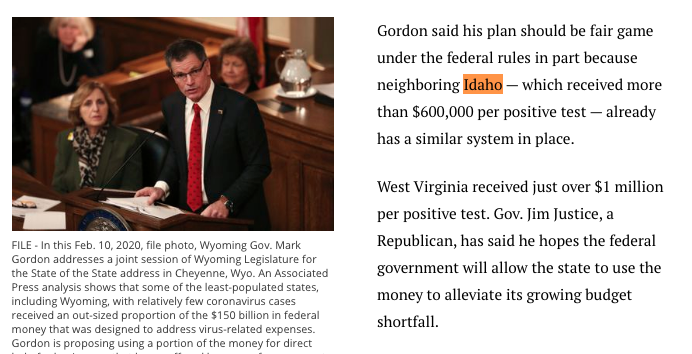 And now, as the reality of this continued SOE, all I have been hearing on the radio (yes--I listen to the radio) is if we END the State of Emergency then we will get NO MORE MONEY!  Way to go Idaho in lacking a backbone to lead our Nation in a way that enforces our independence from the Federal Government.  I mean, I get it, FREE money is hard to give up...just ask all those people who don't want to go back to work!  But just remember, Free Money is NOT FREE!!!!

Was it a PLANDEMIC all along?