Idaho is well know for our "Famous Potatoes" I mean, heck it's even immortalized on our license plates.  North Idaho on the other hand was, a long time ago, considered a breeding ground for white supremacy.  But was it really?  Did the good folks of Coeur d'Alene and Hayden and the surrounding areas really embrace this type of racism?  No, no it didn't.  Just because a California transplant and his small band of racists moved here and set up camp, doesn't mean anyone but them had these racist ideologies. We simply ignored them.  We shut main street down when they had their little parades, we ignored them and didn't play into their prideful agenda and in short order they were run out of town.  Coeur d'Alene, Id didn't tolerate people like Richard Butler and his ugly band of racists!   But what about the Satanists? What about the LGBTQ  group who want to show THEIR PRIDE in a little conservative town that doesn't share their ideologies?  Do we have to agree with them?  Is Satan the new Nazi leader in our town? "HAIL SATAN!" 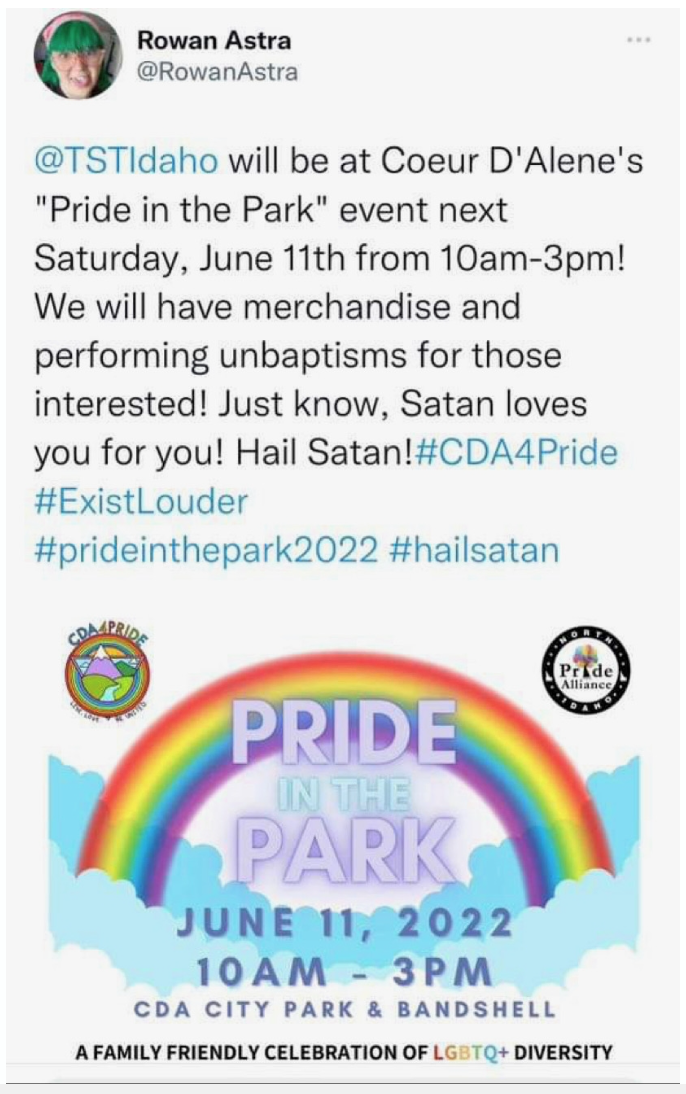 Yep, your read that right!  "Hail Satan!"  What happened to the woeful cries of, "God made me this way"?  Now it's turned into, "unbaptisms" and HAIL SATAN.  Now if you know anything about Coeur d'Alene, Idaho, you know that this is a growing community and a refuge for those escaping the communist, dictatorship of those who have been suffering in Leftist controlled states.  This little community has been one of fastest growing cities in the country for the last couple of years...mostly bringing in Christian, Conservatives who want to preserve their way of thinking, raising their children in a wholesome community and enjoying their God given freedoms.  But with the border jumpers, we get a little leaven in the mix.

Christians and conservatives flock to communities such as ours for the same reasons the LGBTQ folks feel places like San Fransisco, Portland and Seattle feel like home to them and cater to their particular lifestyle.  Isn't that what life is about?  Feeling comfortable and wanted in the community where you live?  Isn't that what we hope for when people immigrate to our country...that they assimilate into the American culture and not force their culture upon us?  This concept is the same in our microcultures within our country like the vast difference between Seattle to our West and Coeur d'Alene and our surrounding areas.

We simply don't care what color you are, we care about your character.  Your morals and values are more concerning to this community than if you are black or white or any other color.  Do we have gay people living here?  Yes!  And a few transgenders as well.  We also have rednecks, corporate professionals, rich folks, poor folks and a whole heck of a lot of everyday blue collar people that make up the bulk of this community.  We have a variety of religions represented here but we are predominantly Christian, just like most small towns in the USA.  Like generally attracts like and this is the major reason we have seen such an explosion of new residents.  These people are not seeking diversity, they are seeking the opposite, Unity.

That being said, why would the Satanists and the LGBTQ folks think it would be OK to hold such an event in our community?  Wouldn't it be much less divisive to hold such an event in the Leftist, Liberal city 20 minutes across our border--Spokane, Wa?  Or is contention and division their goal?  We know that the majority of people who will be attending this event WILL be crossing from Washington state to Coeur d'Alene to attend this event, and it is rumored that they will be coming from Portland and Seattle as well...but not to celebrate.  So what is the agenda here?  Seems to me, the ONLY agenda is to cause trouble in our town.  And this is no different than the Skinheads who wanted their pride heard in the 70s and 80s here, as their goal in showing their white pride was to cause contention and so very few in this town were ok with that.  What is different about the Satanists and the LGBTQ community trying to push their PRIDE on a community that the vast majority doesn't agree?  How tolerant is the LGBTQ community to conservative Christians in places that are predominately LGBTQ filled with ANTIFA?  Not very, they are chastised, called bigots, racists, homophobes and the like.

THIS Twitter post says it all!  These people are looking for a fight on our peaceful streets, inviting ANTIFA to come here!  Domestic Terrorists!  Why would you call these bad actors who have a history of violence and destruction to our town?  To "defend Pride"?  When someone states that they need to "defend Pride" we know we are going to have a problem.  Bullies are full of PRIDE!  People who attempt to force their agenda and will upon others are full of PRIDE. There is NO humility in PRIDE!  There is NO Godliness in PRIDE...  The White Supremacists who found their home here decades ago were also filled with PRIDE!  Satan is filled with PRIDE...

My advice to our community is to treat these people exactly as we treated the Prideful, White Nationalists who once occupied a small space in our community, STAY HOME!  There is ONLY ONE reason these Prideful people are putting on this event in Coeur d'Alene and that is to cause contention in a Conservative, Christian community...that is their agenda and main goal.  STAY HOME!